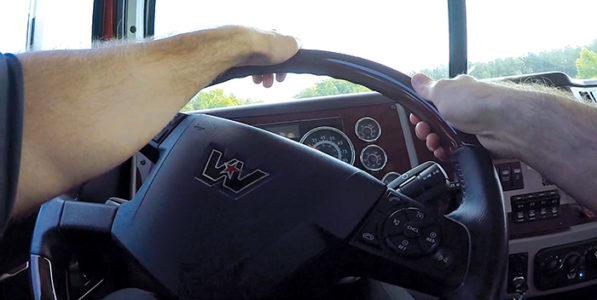 This past year saw the introduction of new trucks, new proprietary integrated powertrain equipment—including the introduction of 2017 engines—and a huge leap forward in terms of truck technology and telematics. Yet the biggest equipment talking point this year was the piece of the equipment productivity puzzle that has the largest direct impact on the truck’s operational efficiency, and it isn’t just one piece of equipment. In fact, it’s not even equipment at all. It’s the driver.

While integration and connectivity trends continue to grow, it was driver-focused offerings from new cab creature comforts to evolved technology solutions that bubbled to the surface as the most talked about aspect of the latest equipment. Fleets and OEMs alike can mostly agree that today’s trucks are, overall, excellent equipment solutions, but the latest efficiency boosting equipment doesn’t help improve a fleet’s business if the drivers don’t know how to operate the technology or, in the worst case scenario, there aren’t any drivers to operate the equipment in the first place.

The latest driver data from the American Trucking Associations (ATA) is encouraging, as the turnover rate at smaller truckload fleets fell nine points to 79%, its lowest point since the third quarter of 2015. Turnover at less-than-truckload carriers rose four points to 12%. A small step in the right direction; however, ATA Chief Economist Bob Costello was quick to point out that it isn’t an indication that the driver shortage problem has been solved. “Though the turnover rate continues to fall at truckload carriers, finding enough qualified drivers remains a concern for many carriers,” Costello said.

Driver retention was a concern that OEMs took to heart as they readied their latest offerings. 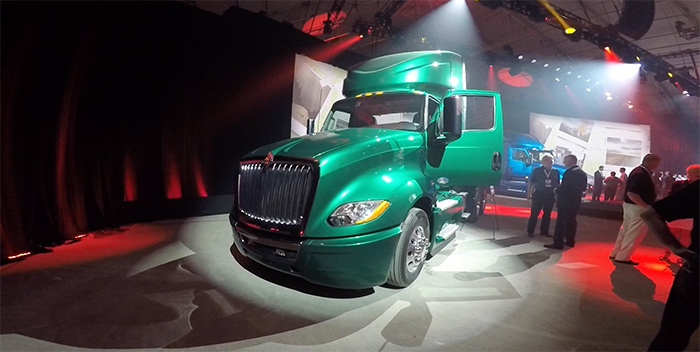 “In today’s environment, trucking companies have been struggling with the driver shortage for several years now; most fleet managers realize that they can have the most efficient equipment on the road today, but if there isn’t a good qualified driver to operate the truck it means nothing,” said Mike Guarino, on-highway and municipal segment manager for Western Star Trucks. “Successful fleet managers take a holistic approach in working with their company’s driver recruiting manager and know that there is a significant real cost to the company in the name of driver turnover. Anything the fleet manager can do to spec a more desirable truck that will attract and retain drivers can reduce the turnover cost to the company and increase ROI to the company’s bottom line.”

While the cost to recruit, train and retain a driver can vary from fleet to fleet, the industry average is around $7,000 per driver, explained Wade Long, director of product marketing for Volvo Trucks North America.

“The driver shortage continuously puts pressure on fleet managers to keep trucks operating,” Long said. “Every driver has a top concern, whether it be driving a safe truck or being comfortable on the road. Fleet managers want to make sure the trucks have features that will attract drivers.”

“Now, more than ever, spec’ing with drivers in mind has to be the number one objective,” said Kurt Swihart, marketing director for Kenworth. “The cost to replace a driver can range from up to $5,000, or even $10,000; then add in the hidden costs like the loss of productivity as well as opportunity costs when you miss out on a load or a contract due to idle equipment. Bottom line: lower turnover means not having to spend company profits on advertising, signing bonuses and training; and it keeps your trucks rolling and making money.”

When it comes to equipment that attracts drivers, it’s fair to say that drivers judge a book by its cover, or in this case, a truck by its creature comforts.

“For most professional drivers, their truck is their office and home away from home. They spend a lot of time in their cab, and the functionality and available creature comforts make the job easier and more enjoyable,” said Jennifer Edwards, on-highway marketing communications manager for Freightliner Trucks. “A comfortable, functional workspace is essential for professional drivers’ productivity and satisfaction. Additionally, a smooth, quiet ride with easily accessible controls, maximized visibility and adjustable features decrease fatigue and provide a better work environment. Storage space and flexibility is important too, especially when driving in teams. Drivers also typically request microwaves and refrigerators, and so they need AC outlets to power various appliances.”

Looking for past winners of FE‘s Truck Equipment Trend of the Year? Click here for 2015’s winner and here for 2014.

The biggest driver comfort features are often the smallest bullet points on a truck sales sheet. But it’s the little things—from where the HVAC vents are located to the amount and even color of the lighting within a cab—that can make the biggest differences in terms of driver satisfaction.

“As an OEM, you have to sweat the small stuff,” said Steve Gilligan, vice president of product and vocational marketing of the North American business unit for Navistar. “When the driver is spending at least eight hours a day in the vehicle, he is going to notice the things that bother him. They’re going to grate on him. For example, the location of the Bluetooth speaker and being able to be connected your phone and have a conversation in the cab when you’re driving down the road and not having to repeat yourself. Or the orientation of the mirrors—placing them lower to reduce needed head movement. Those are the kinds of things that drivers notice.” 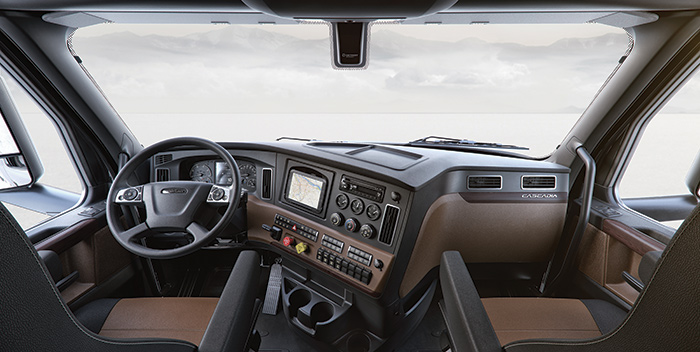 Best of both worlds

Drivers want comfort. Fleet managers want efficiency. Today’s gains are driven by deeper integration within the powertrain thanks to features like automated manual transmissions (AMTs) and adaptive and predictive cruise control, as well as advanced safety systems that enable semi-autonomous braking to keep the accidents costs down. A common refrain from drivers when faced with the latest “assist” technology is that it is taking control out of their hands. Of course, it’s often the case that their tune changes once they get their hands on the systems that are making their jobs easier. 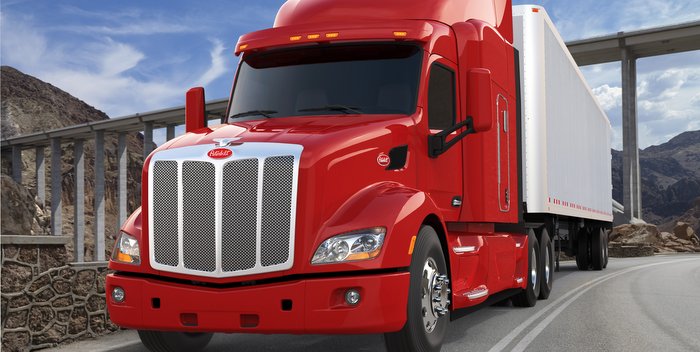 “Once drivers experience new technology first hand and see how it can help make their job safer and more productive, they not only accept the change, they embrace it,” said Anthony Gansle, marketing manager of on-highway products for Peterbilt Motors Co. “For example, the number of trucks spec’d with automated and automatic transmissions continues to steadily grow. Approximately half of our heavy-duty trucks—on-highway and vocational combined—are equipped with either an automatic or automated manual transmission. They continue to gain popularity for their improved fuel efficiency and ease of operability—the latter being a useful driver recruitment and retention tool.”

The percentage of AMT transmission builds balloon from there. In 2016 approximately 65% of customers ordered the DT12 in the Freightliner Cascadia and Freightliner Cascadia Evolution, and approximately 85% of customers ordered the DT12 in the Western Star 5700XE. (It’s interesting to note that a big 5700XE selling point is its position as a reward truck that is bestowed onto the driver who earns it—and 85% of the Western Star 5700XEs that today’s best drivers are hopping into are outfitted with an AMT.) On Kenworth’s flagship T680, AMTs accounted for 67% of the builds in 2016. Volvo shared that 83% of all Volvo truck models were equipped with an I-Shift in 2016.

“AMTs make operation easier with only two pedals [brake, accelerator] versus three pedals [clutch, brake, accelerator] needed to operate the truck and a more ideal environment for drivers of all experience levels,” said Tom Lehman, product manager for Detroit Components. “The ease of operation leading to reduction of driver fatigue can be very important given the general demographic of today’s driver. For the less experienced driver, a computer-controlled shift actuator and clutch helps reduce the stress of ‘finding the right gear’ and allows the driver to concentrate more on driving conditions.” 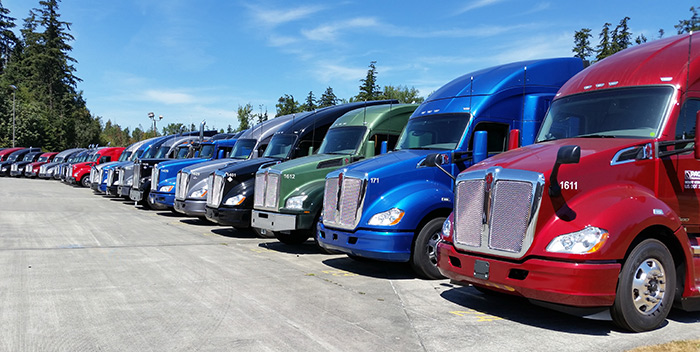 “Fleet managers need to understand that a driver’s resistance and negative feelings toward new technologies may only exist because the driver doesn’t completely understand what it is,” Western Star’s Guarino said. “The easiest way for a fleet manager to explain the benefits of today’s technology like AMT’s and collision mitigation systems is to simply entice the driver to be open-minded and try them out.

“Time after time, we find that once even the most veteran drivers drive our Detroit DT12 AMT they are hooked and don’t want to give the truck back,” Guarino continued. “Let your drivers know that their input is important and make them feel like they have a choice instead of like they are getting something shoved down their throat­­—and nobody likes that.”

Kenworth’s Swihart related a customer story in which an AMT helped to alleviate pain in the driver’s shifting arm. “Most recently, a longtime Halbersleben Trucking driver reported that ever since he started driving his new T680, which is equipped with the Eaton Fuller 10-speed automated transmission, the pain from an old torn rotator cuff injury disappeared because he didn’t have to shift as much,” he said. “We’ve heard similar comments from vocational truck drivers involving the Kenworth T880 [with an AMT.]”

Staying safe out there 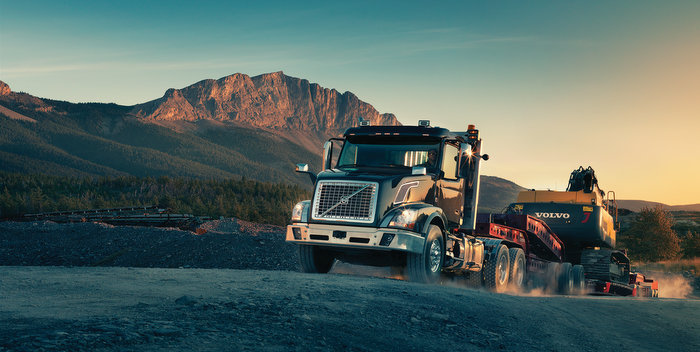 Adoption of advanced collision mitigation systems such as Bendix Wingman Fusion, Daimler’s Detroit Assurance, and WABCO OnGuard ACTIVE were on the rise in 2016 and shows no sign of slowing down. Volvo Trucks recently announced its Volvo Trucks Active Driver Assist. And when International Trucks unveiled its new LT Series in October, the OEM also announced that the Bendix Wingman Advanced collision mitigation system comes standard with every model in the series, which are also available with the optional Bendix Wingman Fusion and Meritor WABCO OnGuardACTIVE systems.

“In talking to drivers, it was very clear that safety was really high on their priority list,” Navistar’s Gilligan said. “Fleets that are adopting collision mitigation are finding that it’s easier to retain drivers and it lowers their insurance premiums, or if they’re self-insured, it lowers the risk. We’re working with both Bendix and WABCO because both of them are advancing the technology of those systems every month. Year over year, the systems are getting better.”

Nearly 50% of all Kenworth T680s have some type of radar-based driver assistance system installed, according to Swihart. “Still, as we remind all drivers and fleets, nothing can replace the need for safe and alert drivers and safe driving practices,” he added.