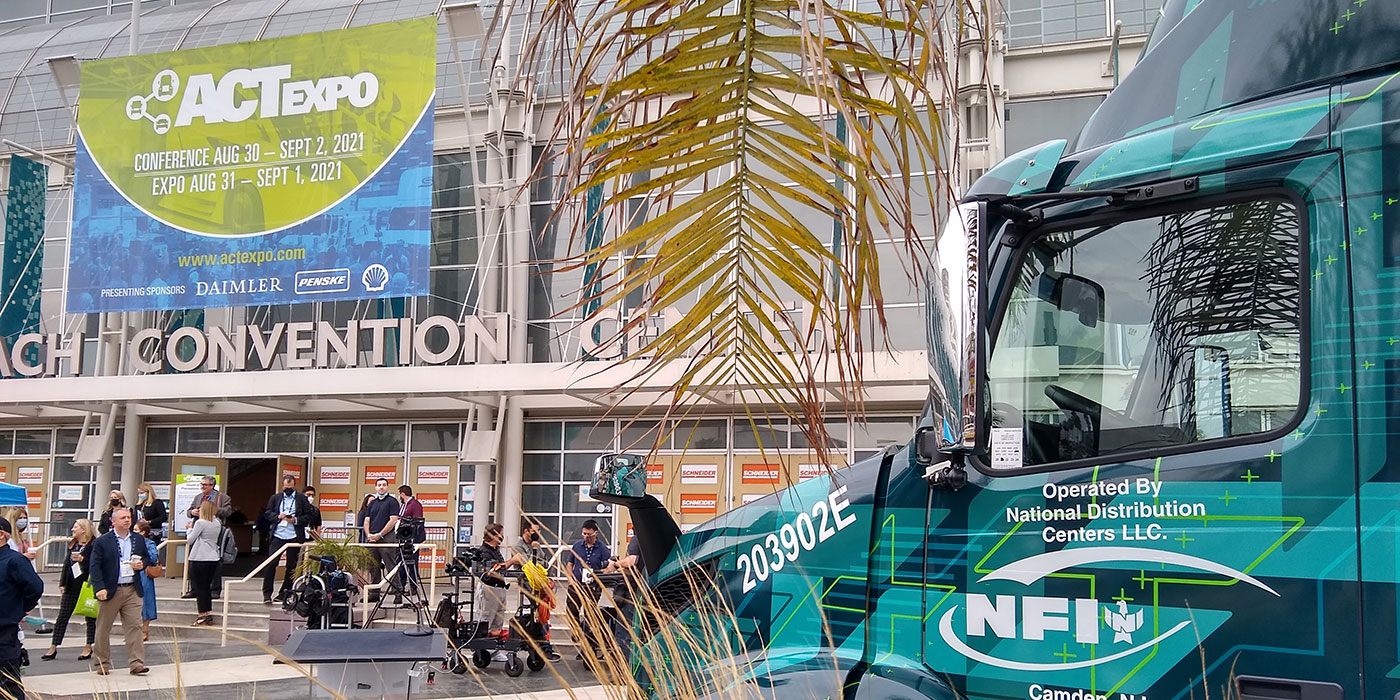 Electrification of the trucking industry is happening. There’s no greater proof that the buzz of activity at this year’s ACT Expo held in Long Beach, California. That’s right, an actual, real-life trade show with approximately 4,000 registered attendees. I’m on the show floor, kicking the tires on the latest zero-emissions technologies and talking with the industry’s early adopters about how they’re accelerating their decarbonization efforts.

We’ll be updating this page throughout the day with pics, videos and the biggest headlines of the day, so as always, keep it tuned to FE for the latest.

During a pre-show press conference, NFI and Schneider announced that they are deploying 100 trucks, including a mix of Volvo Trucks VNR Electric trucks and Freightliner eCascadia trucks, making it the largest electric truck deployment in the U.S. today. Watch the video below for their comments.

Hino Trucks revealed its first Class 8 Hino XL8 prototype powered by a hydrogen fuel cell electric drivetrain. Watch the video below then click on through to the full story after that.

During his keynote address, Voorhoeve noted that by 2050, Volvo Trucks wants to be a completely zero-emissions fleet offering. To get there, by 2030, 35% of Volvo Trucks North America will be zero emissions.

Voorhoeve also noted that fuel cell electric will have a greater impact around 2040, saying that hydrogen fuel cell and battery electric trucks are “not competing technologies.” One has the power generation on board (fuel cells) while the other carries it in batteries and both have their specific applications. Shorter regional haul is suited to battery electric, whereas it’s posited that hydrogen fuel cell trucks will be suited for long-haul applications.

“For me, that’s what ACT Expo 2021 is all about: Act now,” Voorhoeve said as he listed out Volvo Trucks North America’s recent electrification headlines, such as this morning’s NFI and Schneider announcement (see above), the Manhattan Beer Distributors VNR Electric delivery and the LIGHTS Project. “We have a responsibility of our planet and hand it over to our children. I had a discussion with my children who asked, ‘All of these electric vehicles, why are you doing it?’ And I told them we’re doing it for you.”

Watch the video below to hear how Voorhoeve sees Volvo Trucks North America meeting its 100% zero emissions goals by 2050.

During his ACT Expo 2021 keynote address, Skoog quickly noted diesel efficiency improvement over the years culminating in the newly launched Model 579 Next Generation. “Today’s diesel trucks are the cleanest and most environmentally friendly trucks we’ve ever produced,” he said.

(Editor’s note: It’s important to note that in the early days of fleet decarbonization plans, increased fuel efficiency by putting a new diesel truck in your fleet means you’re burning less fuel compared to your previous model truck and, in a sense, working toward decarbonization as battery electric and hydrogen fuel cell technologies come into the market.)

That said, Skoog noted that Peterbilt has more than 400 orders in its backlog for its three EV models: Model 579EV, Model 520EV and Model 220EV. Additionally, Skoog stated that Peterbilt will have 60 electric vehicles in customers’ hands and on the roads by the end of the year.

Skoog also stressed that PACCAR Parts offers a helping hand in creating the infrastructure at customer locations. “Customers must start the infrastructure conversation the minute they consider EVs; there’s nothing stopping you from having a site visit to understand what you’re getting into,” he said. He also highlighted the Peterbilt operating cost calculator. You can learn more by clicking below.

“The [EV] technology is here today, and we’re building and delivering these vehicles today,” he said.

Stay tuned for more updates throughout the day.