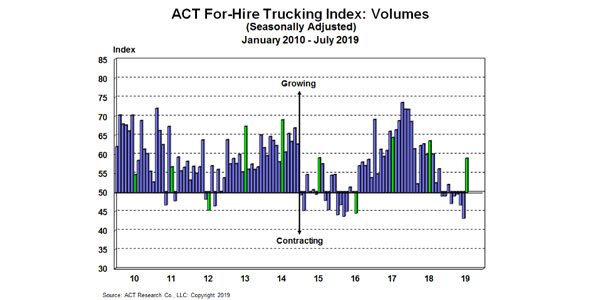 The latest release of ACT Research’s For-Hire Trucking Index, with July data, showed surprising improvement and trend reversal in every category. Two statistical factors were at work—seasonality and base effects—as July is typically soft, and after such a weak June, it wasn’t as bad sequentially, according to ACT.

Commentary from fleets was mixed, but suggested there was underlying improvement in freight volume through July. The Volume Index of 56.7 (SA) in July was 50.0 on an unadjusted basis. The July Pricing Index, at 50.3 (SA), stabilized after declines in Q2, but continued to drop on an unadjusted basis at 47.0.

“Volumes showed signs of life in July for the first time this year, for at least some of our friends in the industry,” said Tim Denoyer, ACT Research’s vice president and senior analyst. “This ties with improving July container volumes, so this may be the start of the pre-ship we’ve predicted since the latest round of tariffs were threatened in May. Still, carriers’ freight volumes and expectations for peak season were described as ‘muted’ and ‘relatively weak,’ though the holidays are expected to be strong.”

Regarding the Rate Index, Denoyer said, “The volume pickup seemed to take some of the pressure off, but rates continued to drop on an absolute basis in July. There is a capacity story to unfold as we head into next year, which should eventually be positive for rates, but this isn’t it. We think it’s too early to view this as a green shoot of the next up-cycle, and we’d ascribe much of the volatility to trade war noise.”