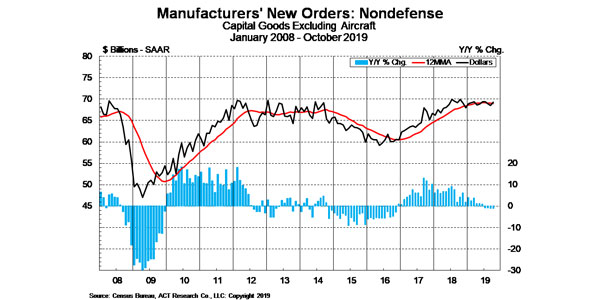 Expectations have been tempered for both 2020 and 2021, ACT Research reports.

According to ACT Research’s latest release of the North American Commercial Vehicle Outlook, expectations for the Class 8 and trailer production volumes have been trimmed for 2020, and expectations of recovery starting in 2021 have been tempered. Additionally, current order softness and excessive inventory building in the medium-duty sector contributed to forecast reductions in the next two years for that segment, as well.

“Broadly, there are three components to the forecast cuts for 2020 and 2021: supply, demand and timing,” said Kenny Vieth, ACT’s president and senior analyst. “Some, like overcapacity, have been on the radar for a long time. Others, like the growing weakness in manufacturing and the broader economy, have come on slowly and inexorably over several months.”

“The past six months have been marked by a continued loss of traction in manufacturing,” Vieth added. “Despite the GM-impacted payroll increase in November, most recent evidence from the sector suggests that recovery is likely to come later, rather than sooner.”