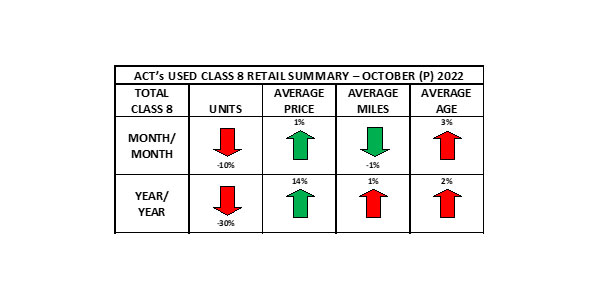 Preliminary used Class 8 retail volumes (same dealer sales) decreased 10% month-over-month, and were 30% lower compared to October of 2021, according to the latest preliminary release of the State of the Industry: U.S. Classes 3-8 Used Trucks published by ACT Research.

Other data released in ACT’s preliminary report included month-over-month comparisons for October 2022, which showed that average retail price ticked up 1%, average miles declined 1%, and average age increased 3% from September’s readings. Compared to October of 2021, the average retail price was 14% higher, with average miles and age both greater by 1% and 2%, respectively.

“Drama in the used truck market increased in October, as the average retail sales price moved counter to expectations, ticking up a scant 1% m/m,” said Steve Tam, vice president, ACT Research. “While a welcome change from the monotonous drumbeat of persistent decline, nothing fundamental that would recalibrate expectations has changed.”

ACT’s Classes 3-8 Used Truck Report provides data on the average selling price, miles, and age based on a sample of industry data. In addition, the report provides the average selling price for top-selling Class 8 models for each of the major truck OEMs – Freightliner (Daimler); Kenworth and Peterbilt (Paccar); International (Navistar); and Volvo and Mack (Volvo). This report is utilized by those throughout the industry, including commercial vehicle dealers to gain a better understanding of the used truck market, especially as it relates to changes in near-term performance.

Relating to new truck build, Tam stated, “Tracking the flow of new truck assembly can be informative with regard to the supply of used truck inventory. As the OEMs have continued to make incremental progress on overcoming supply-chain constraints, marginal improvements in output have logically followed. Looking ahead, other forces will step in and offset those improvements.”