Are EVs sticking around for the long-haul? 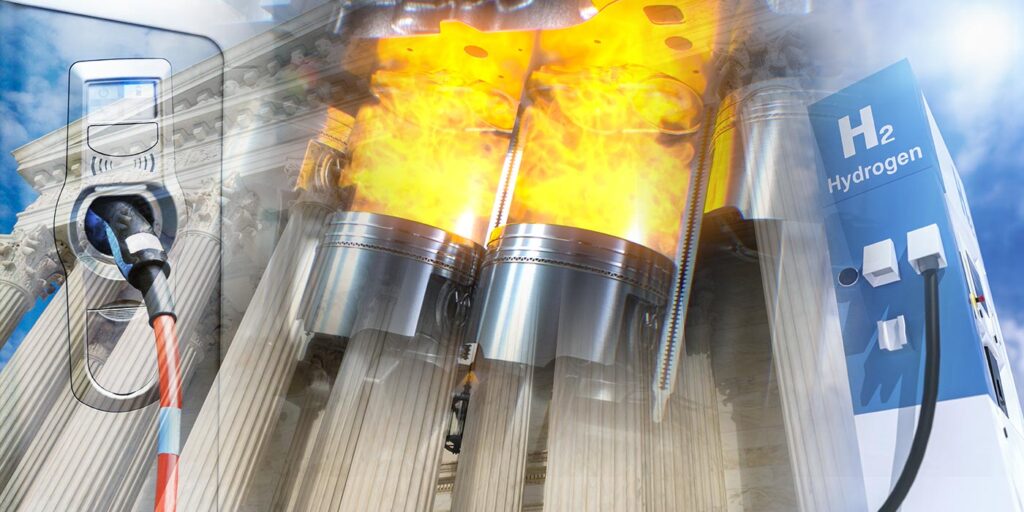 It seems there isn’t a shortage of things we can find to disagree on. Everyone has their own view (and a side that opposes them), and the trucking industry is no exception. But not being able to see eye to eye on hot topics isn’t necessarily a bad thing. In fact, it may just lead the industry to the answers everyone is looking for. Heavy-duty emissions are always a topic of conversation. Idealistically, many share the like minded goal of achieving zero emissions, but how we get there…

Three different technologies are paving the way to a more sustainable form of long-haul trucking, but which one will tower above? In a debate recently hosted by Mobility Impact Partners, Mike Roeth, executive director, North American Council for Freight Efficiency (NACFE), moderated a discussion concerning exactly that.

Taking the stance that internal combustion will continue to achieve its predominant ranking was Allen Schaeffer, executive director, Diesel Technology Forum, who argued that its availability and efficiency remains unmatched.

Collin Murphy, deputy director, UC Davis Policy Institute, defended the rising popularity of electric vehicles claiming that the technological strides being made put the industry significantly closer to reaching zero emissions compared to any other form of heavy-duty transport.

Lastly, the potential of hydrogen fueled vehicles was endorsed by Craig Scott, group manager, Toyota. While not as commonplace, this form of travel can meet the demands for every type of vehicle and offers a brief refueling period similar to filling up a gas tank.

Let’s dive into the arguments.

Step on the gas

Within his opening testimony, Schaeffer explained that internal combustion engines make up for around 11 million diesels on the road, securing its title as the dominant technology on the highways, and he doesn’t see this changing anytime soon. For decades, diesel has made great advances towards lowering emissions, but according to Schaeffer diesel engine development doesn’t stop here. Progress continues to be made on new diesel technologies due to new and developing regulations and commitment from the industry.

According to Schaffer, research found suggests that half of all operating commercial vehicles are of the newest generation of internal combustion.

“It’s equivalent to removing about 43 million passenger vehicles from the road or a pretty good size wind farm in terms of energy savings,” he said.

With decreasing emissions comes the convenience and familiarity of internal combustion technology. Factors such as charge time and range capabilities are not of concern while operating diesel trucks. In fact, according to Schaeffer, the industry depends on the demand for diesel.

“The value proposition for diesel is quite substantial,” he said. “Diesel checks a lot of boxes that other alternatives are going to have a very difficult time meeting.”

Both Murphy and Scott were quick to point out that while diesel is an established powertrain technology that is working towards increased sustainability, it is still contributing to global emissions. As other forms of zero-emissions transportation continue to rise in popularity, the opposing sides warn that the momentum of internal combustion will be quick to decrease in the years to come.

“Even when you get away from the greenhouse gas and the driving emissions, the production and refining of a petroleum is not exactly a clean thing to do,” Murphy said.  “There’s no way petroleum can get to zero, and I had somebody spend a lot of time researching biofuels, there’s no way to produce anywhere near enough biofuels at zero carbon, so what’s the pathway to zero?”

There is no doubt about it – long haul trucking is vital to the health of the economy, but for the health of the earth?… Not so much. The emissions produced from the travel are undoubtedly a cause for concern. The transportation industry poses a significant challenge to achieving zero emissions and while steps are being taken to reduce the negative emissions impact, EVs may be the most environmentally conscious option.

Queue Collin Murphy who presented the benefits of electrification. This technology has captured the attention of the industry, but is it a reliable substitute for what the industry has been using all along? According to Murphy, the answer is, “Yes!”

“Electricity has the quickest, cheapest, and least risky pathway to get to zero [emissions], and that is absolutely critical,” Murphy said.

The Class 7 and 8 EV trucks already on the road are generating data used to further improve the system. They have shown that application demands can be met with electric trucks. Issues such as range anxiety and performance capability concerns are being addressed through continuous efforts for improvement.

“EVs deliver more travel effectively, and because an electric vehicle doesn’t need to have nearly the same size of radiator, the transmission, the exhaust after treatment and all these other ancillary systems, there’s a lot less maintenance involved,” he said.

In fact, research found by Murphy shows that EVs require less maintenance, which improves affordability by lowering the overall long-term cost for a first time owner.

Even as the EV operation grows in application, fleets and others in the trucking industry have  questioned its functionality. And rightfully so. Having to recharge every few hundred miles could be highly inconvenient for long-haul trucking. Due to the lack of sufficient range and consistent need for an extended refueling period, the practicality of heavy-duty EVs is still in its early stages of development.

Additionally, as pointed out by Schaeffer, there is simply a lack of financial support to drastically change the transportation infrastructure.

“I don’t think it’s smart to say we’re going to fully electrify all long haul trucking. It’s not going to happen,” Schaeffer explained. “It’s going to happen in some sectors, in some places, but at different points in time.”

While considered the most uncommon form of the three, Scott was eager to present the case as to why hydrogen fuel is on its way to becoming the future of trucking’s underdog. One of the most appealing features of hydrogen fuel use is its impressive adaptability competence. According to Scott, it is scalable to a diverse range of applications.

“Fuel cells make more compelling product offerings, be that forklifts, to commercial vehicles, to passenger vehicles, to stationary power, to airplanes, to buses, fuel cells can meet all of these demands,” Scott said.

Along with its wide range of application use comes the convenience of a quick refuel period–similar to that of a conventional diesel vehicle.

Scott explained that he anticipated hydrogen fuel cell popularity to increase within the years to come, not only in the U.S., but globally as more and more models are announced. By 2030, 300 billion dollars are anticipated to be invested within the market due to the increasing popularity of decarbonizing transportation Scott said. He also noted that the Hydrogen Council, a global organization focused on decarbonizing transportation, counts more than 130 members, which Scott called a “significant increase over the past several years.”

A quick refuel period, promises of zero emissions and wide range of usability almost seems too good to be true. Murphy and Schaeffer pointed out issues, such as a lack of relevancy and scarce refueling locations, that may prevent this form of technology from rising to the top. While public interest is driving hydrogen fuel progression, a lack of funding may halt the initiative..

As addressed by Murphy, the proposed hydrogen tanks and batteries within the cab leave little room for driver accommodations which could make long distance trips a challenge for drivers using hydrogen technology within their fleets.

“I don’t know that a 500 mile truck without a sleeper cab is really all that useful given today’s long haul trucking market,” Murphy said.

What it all means

Each argument was undoubtedly presented in a compelling manner. Whether the future of trucking is diesel, electric, or hydrogen fuel, each of their distinct features and impressive concepts make that idea not so hard to believe. However, that’s the beauty of debate. So what’s your argument? For or against, drop me a line and let me know [email protected].