Delivering fuel to gas stations throughout northern Virginia and the Washington, D.C., and Baltimore metropolitan areas, Fleet Transit’s fleet of 50 tractors is faced daily with some of the nation’s heaviest stop and go traffic. The company was looking for ways to lower maintenance costs, eliminate driveline problems and increase fuel economy, notes Ken Glover, maintenance supervisor. It also wanted to improve safety and enhance driver recruitment and retention. 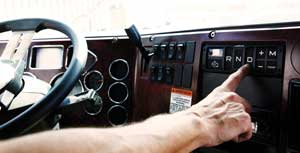 Advertisement
Click Here to Read More
Advertisement
Delivering fuel to gas stations throughout northern Virginia and the Washington, D.C., and Baltimore metropolitan areas, Fleet Transit’s fleet of 50 tractors is faced daily with some of the nation’s heaviest stop and go traffic. The company was looking for ways to lower maintenance costs, eliminate driveline problems and increase fuel economy, notes Ken Glover, maintenance supervisor. It also wanted to improve safety and enhance driver recruitment and retention.
Today, Fleet Transit believes that is has found part of the answer for addressing all of those challenges in Allison automatic transmissions. Since buying six Allison-equipped tractors in 2010, the company has added 16 more, including four in the first half of 2013. “With a manual transmission, our average fuel economy on those trucks is 6.2 MPG,” Glover relates. “On the Allison-equipped trucks it’s 6.7 MPG, an 8.1% improvement.”
Glover also points out that the first six of Fleet Transit’s Allison-equipped Mack tractors now have approximately 225,000 mi. With an average clutch life of 200,000 mi. and an average cost of clutch replacement at about $4,000, the company estimates it has saved $24,000 on clutches so far.
Usher Transport, based in Louisville, Ky., specializes in short and midrange tanker loads with a fleet of 300 Freightliner and Volvo tractors. Due to the hazardous nature of most of those loads, notes Keith Judd, maintenance director, safety is a top priority when specifying new equipment.
“The Eaton UltraShift PLUS transmissions that we are using are working very well in our safety and vehicle program,” Judd says. “With our loads, materials are always shifting, especially on hills. The added extra seconds that you get after releasing the brakes with the UltraShift PLUS transmission’s Hill Start Aid allows drivers to keep moving forward without having to worry about a car a few feet behind the trailer. Hill Start Aid and intelligent shift decisions allow drivers to focus on the road.”
Usher Transport is now specifying Eaton UltraShift PLUS Linehaul Active Shifting (LAS) automated transmissions. Along with safety, Judd adds, the fleet is also seeing as much as a half of a percentage point in fuel consumption improvement.
Range of offerings
Those are two of many stories that point out the value that fleets are realizing by spec’ing automatic and automated transmissions, which are now available from a number of truck OEMs and component manufacturers.
Allison Transmission

Allison Transmission, which offers a wide range of automatics for a variety of applications, recently rolled out its fifth generation electronic controls that are designed to match the latest vehicle electrical-electronic architectures. Featuring enhanced programming and a new bump lever selector design, the company notes the fifth generation controls enable optimal shift strategies for meeting fleet requirements. Embedded in the Allison control module, as well is a new inclinometer, which the manufacturer says improves its load based shift scheduling (LBSS) system’s performance by making the automatic selection between economy and performance shift schedules faster and more accurate. The new generation of electronic controls also provides two additional acceleration levels. Specific features of the fifth generation electronic controls are being rolled out throughout 2013.
Detroit 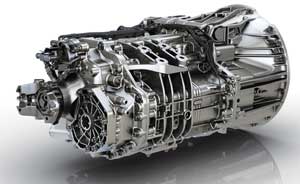 Detroit began production earlier this year of its DT12 automated manual transmission for the North American market. The DT12 is available exclusively in the Freightliner Cascadia equipped with a Detroit DD15 engine with ratings from 455 to 505 HP. Additional versions of the DT12 for the Detroit DD13 and DD16 engines will be released in late 2013 and 2014. The DT12 includes features such as eCoast, which Detroit says maximizes fuel efficiency by allowing the vehicle to coast down grades at idle speeds, skip shift powertrain controls that automatically skip unnecessary gears and active driveline protection. Optional are a direct drive version while all models have three driving modes that drivers can select based on terrain and application.
Eaton 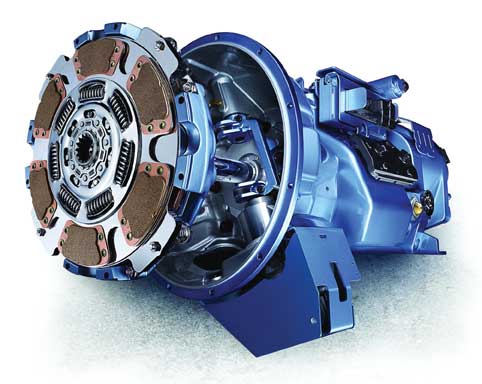 Eaton UltraShift PLUS automated mechanical transmissions, available in overdrive and direct-drive models, feature new clutch technology and shift selection software that employs grade sensing, weight computation, and driver throttle commands. Eaton recently launched a new family of UltraShift PLUS transmissions designed specifically for Navistar. The 16-speed direct drive automated mechanical transmissions are designed with a small 17% step between gears. The UltraShift PLUS LSE (Linehaul Small-Step Efficiency) will be released initially with MaxxForce 13L engines on Navistar trucks and then with Cummins ISX (15-liter) engines. Eaton has also added six new models to its lineup of UltraShift PLUS transmissions to complement newer low torque diesel engines. The additions include three new UltraShift PLUS Vocational Construction Series (VCS) and three new Vocational Multipurpose Series (VMS) transmissions.
Mack Trucks
Mack Trucks is offering the mDRIVE automated manual transmission designed to work with MP7 and MP8 engines in its Econodyne and MaxiCruise series. The mDRIVE has 12 forward and four reverse speeds and is available in direct drive or overdrive models. Available in Fleet and Premium packages, the mDRIVE’s customer-programmable parameters and functions include an Auto Neutral feature that shifts the transmission to neutral if the engine is turned off while still in gear, a Grade Gripper feature that holds the service brake until the throttle is applied, and Cruise’n Brake, which limits engine brake operation while in cruise control until the target speed has been reached. Additionally, the MackCellerator feature allows the driver to raise engine RPM while automatically shifting to a lower gear.
Volvo Trucks 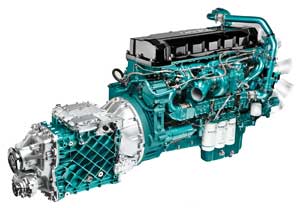 Volvo Trucks has made its I-Shift automated manual transmission standard on all Volvo-powered trucks built for the North American market. The 12-speed Volvo I-Shift averages 28% between gears and uses integrated sensors to identify load and road grade and place the transmission in the right gear for conditions. Available in six feature packages, I-Shift can be customized with skip shifting, Eco-Roll, which allows the transmission to disengage the engine in certain situations, and an Engine Brake Performance mode that selects a gear that maximizes retardation. There is also an idle driving mode cruise control enhancement that allows the engine to operate at idle without cycling the clutch or using the accelerator for use in congested traffic and when backing a trailer.
Integrated powertrains
Automatic and automated manual transmissions are part of the latest integrated powertrain offerings from vehicle OEMs and transmission manufacturers.
“Transmission and engine integration provides for the most efficient operation of the truck,” said Chris Stadler, product manager at Volvo Trucks. “The two-way conversation that takes place between the transmission and engine has greatly enhanced drivetrain performance. This exchange of information ensures the engine operates in its ‘sweet spot’ and the transmission is in the right gear at the right time.”
Optimized powertrain design and engineering is critical at Daimler Trucks North America, notes Brad Williamson, manager, engine and component marketing. The DT12, he points out, is part of a complete line of components that also includes engines and axles, and fleets spec’ing an entire powertrain package can expect an even greater level of efficiency.
“It’s what we refer to as balanced design,” says Kevin Flaherty, Mack’s senior vice president, sales and marketing. “Building trucks with integrated components means delivering trucks exactly fitted to customer applications. The entire vehicle is more reliable and performs better because each component is designed in concert with the others.”
Advertisement
In this article:Before & After, Drivetrains