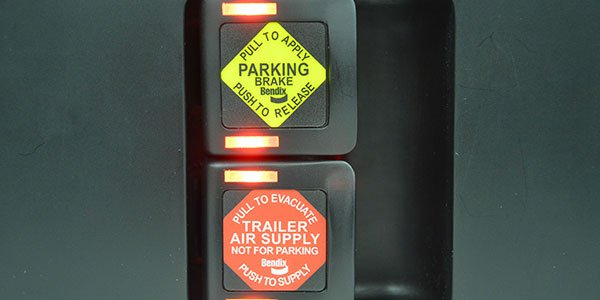 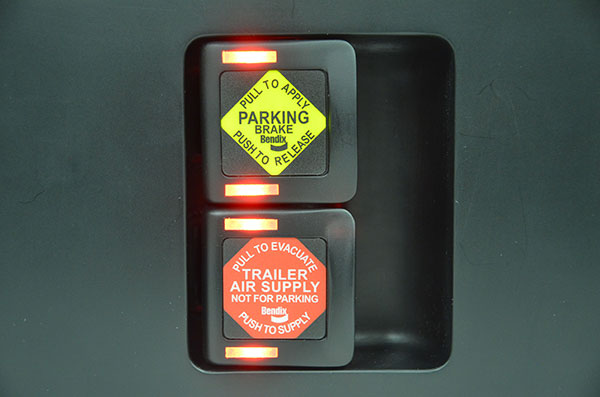 This scene is more common than you might think: A driver steps down from a big rig and walks away. Moments later, out of his view, the truck starts to roll backward because of a failure to properly set the parking brake. Unless the driver sprints back, jumps in, and stops the vehicle, risking potential personal injury, a crash can be imminent – if one hasn’t already happened. That’s the scene Bendix painted during its press conference at the North American Commercial Vehicle show.

Soon to debut from Bendix is a technology designed to help drivers prevent rollaway and runaway crashes caused by an improperly set or disengaged parking brake. Intellipark automatic parking brake technology replaces the manual air parking brake with electronic switches. Additionally, it will automatically set the parking brake if the driver exits the vehicle without engaging the brake. Intellipark works through interlocks installed in critical areas, such as the seat, seat belt or cab door – engaging the brake if the driver leaves the seat or opens the door without setting it first. The system is designed for any air-braked vehicle, including tractor-trailers, single-unit trucks, motorcoaches, and school buses.

“You could think of rollaways as the industry’s little secret – something that happens but few people talk about – unless you search online for ‘rollaways.’ In fact, nearly 60% of fleet managers who participated in a Frost and Sullivan survey confirmed that they had experienced a rollaway in a 24-month period,” said Fred Andersky, Bendix director of customer solutions – Controls. “Rollaway incidents can be terribly damaging – if not deadly – and come at great cost to fleets in terms of money, resources, and reputation. And all because the parking brake didn’t get set properly or was released accidentally. Automatic parking brake technology can help make these kinds of accidents – and their repercussions – a thing of the past.”

Setting the parking brake with Intellipark is a flip of the switch, according to Andersky. Gone is the need for force to pull out or push in the red and yellow air switches on the dash. Instead, the electronically controlled Intellipark displays the familiar red and yellow symbols on switches that are easily flipped on and off with two fingers, Bendix explained. Through lights on the switch, the system also delivers visual alerts to the driver. The enhanced ergonomics may help decrease driver fatigue and the incidence of repetitive motion injuries.

Intellipark also provides data – something else not available from an air switch – to help indicate if a rollaway occurred or almost happened. For vehicles equipped with the web portal SafetyDirect by Bendix CVS, that data is transmitted wirelessly and automatically to fleet offices. There, fleet managers can use the information to help with driver training and as part of an overall safety program.

Park-at-Speed helps ensure a controlled stop when the parking brake is activated while the vehicle is traveling at speed. Trailer Air Warning supplies the status of the trailer’s air supply through a light or other indicator on the dash. Trailer Auto-Park Release disengages the trailer park brake automatically when an operator inadvertently attempts to drive away with it on – helping to reduce the chance for trailer tire fires and wheel-end damage, according to Bendix.