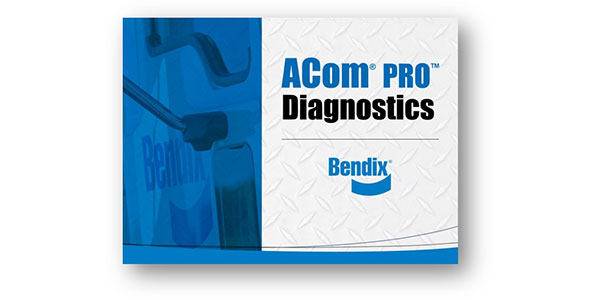 Under the agreement, Bendix and Noregon will work together to introduce and incorporate technology advancements to further enhance diagnostics for Bendix products in the marketplace. Sharing a vision of increased vehicle uptime and improved performance, the partnership collaboration aims to utilize both organizations’ unique expertise in vehicle system advanced diagnostics to create the best possible customer experience.

With the next generation of its diagnostic software, Bendix ACom PRO, Bendix Commercial Vehicle Systems provides fleets and technicians with a leap forward in troubleshooting, thanks to a fully redesigned and re-engineered diagnostic tool, the company stated.

Bendix launched the original Bendix ACom Diagnostics software in 2004. Fifteen years on, it’s been downloaded over 100,000 times, and gone through frequent versions, updating its features and functionality to interact with new and increasingly complex systems.

“There are several key improvements we made to ACom PRO,” Thomas said. “For example, when connected, ACom PRO automatically detects and gathers active and inactive diagnostic troubleshooting codes [DTCs] from all Bendix electronic control units [ECUs] on the vehicle, as well as key vehicle ECUs, like the engine and transmission. This roll call shows what’s on the vehicle, eliminating the need for a technician to guess from a pre-populated list of components that might be on the vehicle.”

This comprehensive system-level approach allows the technician to get a much more complete picture of which DTCs are active and inactive to quickly judge what needs to be addressed first.

ACom PRO’s detailed vehicle-wide ECU report can be generated within about two minutes after connection. Additionally, the system runs quicker checks through streamlined bidirectional testing, and some tests that currently require two technicians can be run with just one.

Click here to read all of our NACV coverage.

A more intuitive graphical user interface, and clearer, menu-driven operation are also designed to smooth and speed the maintenance process. And through Bendix’s collaboration with Noregon, ACom PRO will utilize internet connectivity to display schematics and related information specific to a particular system fault through Noregon’s NextStep Fault Guidance application. Thomas estimates that each time ACom PRO is used, technicians could save 20 minutes of time compared to doing the same job with the previous version, depending on the DTC.

IPA launches Alpha Mutt with ABS, tablet
Connect with us