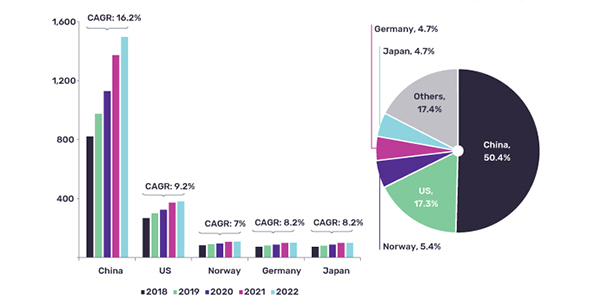 The demand for electric vehicles (EVs), which have emerged as a clean alternative to traditional vehicles, has picked up in the recent years, according to GlobalData, a data and analytics company. GlobalData forecasts that the demand for lithium, needed for the production of lithium-ion batteries for use in EVs, will more than double from 26.7kt in 2018 to 58.3kt in 2022.

According to GlobalData, the global EV market is expected to grow at a substantial CAGR of 15.6% through to 2022, driven by the growing popularity of EVs across countries in Asia-Pacific (APAC) and Europe. The company further reveals that China will lead the global EV market with more than 50% share and grow three times as fast as the US over the next five years.

This in turn, will result in increased consumption of lithium and support investment in mine expansions across Chile and Australia and new mine development in Chile, Australia, Argentina and Canada.

“Several national governments are encouraging the adaption of EVs by providing various tax incentives and subsidies to the manufacturers and end users,” said Vinneth Bajaj, senior mining analyst at GlobalData. “Additionally, efforts to reduce greenhouse gas emissions have led to much technological advancement in EVs and made them a viable and safe alternative to traditional vehicles.”

“The largest increase will be in China, which is expected to boost its EV sales from 579,000 in 2017 to 1.5 million by 2022,” said Bajaj. “Current government policies and subsidies are making China a lucrative market for industry investments due to which the country’s EV market is poised to grow three times as fast as the US during the outlook period.”

Read more on the growing electric vehicle trend in our 2017 Truck Trend of the Year article here.

Advertisement
In this article:Electrification, GlobalData

Bypass the weigh station, not the data-sharing conversation

Bendix adds Geotab as SafetyDirect telematics partner
Connect with us