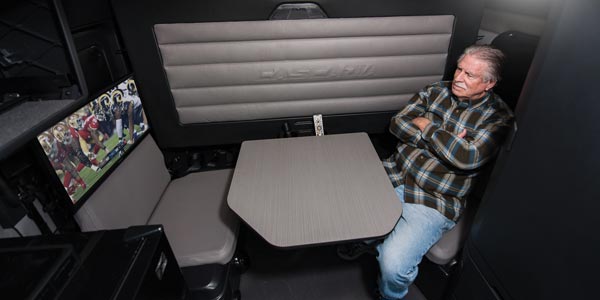 Over the past few years, many trucking companies have announced driver pay increases, improved benefits and other financial incentives to help recruit and retain drivers.

“The ROI is typically fairly easy to calculate because carriers know their driver recruiting and replacement costs,” says Lance Platt, chief executive officer of in-cab satellite TV provider EpicVue. “That’s one reason why pay and benefits are on the rise, but even companies with lower than average turnover rates know that providing the comforts of home has significant value.”

EpicVue, which regularly surveys fleets and drivers, reports that companies already committed to their drivers are most interested in amenities that improve quality of life on the road. “Originally, we thought we could offer the most value to trucking companies with the highest turnover rates, but it is fleets with generally lower turnover who are finding the most value with in-cab satellite TV systems,” Platt says. “Those carriers are using other types of rewards to retain drivers, in particular things that help make life on the road easier.

“They’re also realizing that if EpicVue costs $600 per year and their recruiting costs are $7,200, all they need to do is keep the driver one more month than they would have otherwise to realize a return on their investment in satellite TV.”

The experience at TMC Transportation, an open deck trucking company, illustrates Platt’s point. In 2015, the carrier began installing EpicVue satellite TV systems in tractors used in linehaul operations where drivers are on the road at least a week at a time. TMC Transportation then collected 16 months of data comparing retention rates among newly hired drivers in trucks with EpicVue to a control group of similar drivers without the systems. The result was a 23% improvement in driver retention that led to almost $1.2 million in savings.

Read our full feature on how today’s cabs are built for driver retention here.