Especially for a private fleet, this is a figure that’s important to know, but not one that’s easy to calculate.

Economies of scale
Such a situation could prove to be very important because the study also indicated that it was smaller fleets that did not have a complete handle on total costs. Stella said, “Economies of scale definitely play a significant role in thinking about the cost of ownership of the fleet. Small- to medium-sized fleets can potentially save 5% to 36% by outsourcing acquisition and maintenance operations to large companies having a lower cost of ownership. The 5% figure applies to fleets in the 500 vehicle range. The 36% applies to smaller fleets of one to 100 vehicles total.” (See Table 1) 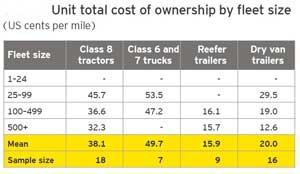 The Ernst & Young study considered four major cost categories: cost of capital, maintenance costs, licensing costs and vehicle administration. Suchet Singh, a senior manager in the study team, indicated costs associated with capital and maintenance are those most influenced by economies of scale. The result is a decreased cost of ownership with increasing fleet size. This, as the written report suggests, makes intuitive sense since larger fleets have greater negotiating power with dealers and have greater potential to realize maintenance efficiencies, including through improved shop utilization. In particular, the greatest decrease in cost per mile existed as fleets moved from the 25 to 99 fleet size range into the 100 to   499 fleet size range.

Cost of ownership, like most other costs, also can be divided into fixed and variable costs. Here again we can easily see that administrative costs—personnel, accounting, etc.—are going to be relatively stable no matter how the size of the fleet changes. Operating costs, on the other hand, will definitely vary directly with the fleet size. More miles mean more fuel and tires. More vehicles mean more financing and higher maintenance costs. The Ernst & Young study report presented a breakdown of the various components of the total cost of fleet ownership by vehicle type. (See Table 2) 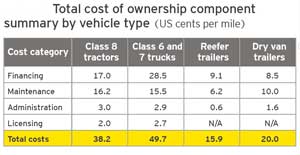 Impending changes
Changes on the regulatory scene and in equipment technology are affecting, and will continue to affect, fleet ownership costs. FMCSA’s Compliance, Safety and Accountability regulations promulgated in 2010 are now fully operational, and activities like random roadside inspections, warning letters and interventions are being fully enforced.

Fleets that have had efficient maintenance operations have not been particularly bothered by these new safety and maintenance requirements. They do, however, have the potential of affecting operations. Darry Stuart offers the example of a truck that is scheduled out of a terminal at 2 a.m., a time when the maintenance shop at that location is not open. The driver, while doing his pre-trip, finds a marker lamp out on the top of his trailer. In times past, the driver might well have pulled out of the yard and taken a chance on the unlikely possibility of a ticket. Now, however, he might choose to delay the 2 a.m. departure because he might get points charged against him personally if he is stopped.

Editor’s note: If you would like to read or download a copy of the Ernst & Young report, go to http://bit.ly/VytZiw.

Because of the new regulations taking effect and the introduction of so much new technology in the same time frame, increased training is being required for technicians. Ryder’s Deris said, “We’re seeing a great deal of change in training requirements. Many companies that have run their own maintenance facilities for many years have technicians very familiar with the vehicles that the fleet has purchased. As new equipment comes into the fleet, managers realize it’s necessary to train technicians every time they upgrade their equipment.

“There are also some revolutionary opportunities entering the marketplace today,” he added. “The use of natural gas and other alternative fuels is just one example. If you consider entering into that arena of technology, you’re going to have to make some tremendous investments in infrastructure, as well as technician training. It’s not like in the past when we had small changes in engines and other vehicle systems. We now regularly see dramatic leaps forward, and most companies simply do not have the resources to develop and train their people as they go forward.”

Use real numbers
If you plan on calculating your cost of fleet ownership, use your fleet’s numbers. Stuart said, “When people put numbers together to calculate their cost of ownership, they too often do so using numbers that they believe to be accurate, but more often than not wind up using numbers that say just what they want them to say.” By way of example, a fleet manager might find it expedient to use an outside source for some data.

For instance, it might seem reasonable to use figures supplied in a leasing company’s proposal for maintenance per mile instead of determining that number from the fleet’s own maintenance records. Unfortunately, the fleet will usually not be able to maintain its equipment at such a figure because the leasing company enjoys economies of scale compared to a smaller, private operation. 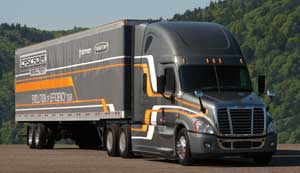 Besides using figures in a cost of ownership calculation that are not directly applicable to a fleet, some costs are simply forgotten or not recognized, and therefore not included. Stuart offers the following scenario as a possibility:

A fleet is having some problems with an emissions control system on a relatively new truck. Because it’s a recent addition to the fleet, the system will still be under warranty, so the fleet manager makes a rather reasonable decision and arranges to have the truck taken to the dealer for repairs. The dealer, however, happens to be 35 miles away and the truck gets about five miles per gallon of fuel. It’s a seven gallon trip.

He also sends another vehicle along to bring the first driver back home. Unfortunately, the only vehicle available is another tractor that also will consume seven gallons of fuel—each way. The total so far is 21 gallons. Double that for the return trip to bring the repaired tractor back. By this time we’ve used 42 gallons of fuel at $3.50 per gallon, or $147.

Now add in the labor time consumed by the two technicians. Being realistic, that 35-mile trip is going to take as much as an hour each way. Two technicians would use two labor hours for each round trip. The total is four hours at about $1 a minute, or $240. The result is a total expense of almost $400 for a warranty repair, an expense that will most likely never be captured.

The Ernst & Young team found that some small- and medium-size fleets that were able to purchase equipment with cash did not include the cost of capital in their cost of ownership calculations. Their belief was that, since they did not have to finance their purchases, they did not have to include interest expense in their calculations. They did not understand that when they used reserve funds for new equipment, they lost the opportunity of using that money for other ventures that might have brought a more desirable return, which needed to be considered in their calculation.

It’s important to know how much it costs to own your fleet. But when you decide to make a cost of ownership calculation, do it carefully. Use your own numbers. Try to capture all your expenses, and look to the future of your operation as well as you can.

Advertisement
In this article:Equipment Technology