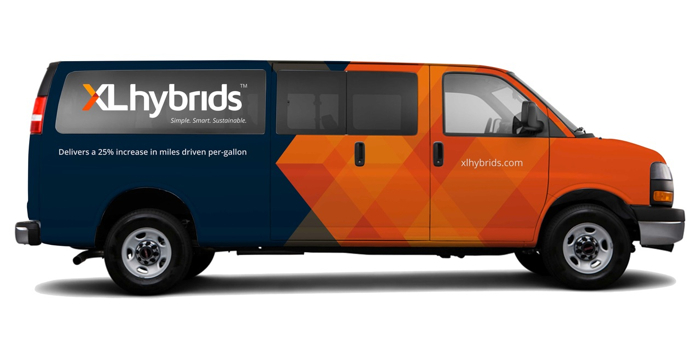 With corporate and municipal operations realizing a positive payback, hybrid electric vehicles (HEVs) are a hot topic among a growing number of light-duty fleets these days. The quick fleet adoption rate is focused in part on HEV aftermarket technologies.

Over the past year, for example, XL Hybrids has been realizing a steady expansion of its business. After introducing its XL3 Hybrid Electric Drive System for Class 1 to 4 commercial vehicles such as vans, cube trucks and shuttle buses, the company received approval from the California Air Resources Board (CARB). The CARB approval allows aftermarket conversions into hybrid electric vehicles of gasoline-powered 2012-2014 model year General Motors 2500 and 3500 vans, and Chevrolet Express and GMC Savana vans.

CARB’s Executive Order reflects the success of an engineering evaluation of XL Hybrids technology. It reads, “If the part or modification is shown to not increase vehicle emissions, it is granted an exemption to emission control system anti-tampering laws. This exemption allows the modification to be installed on specific emission controlled vehicles.”

As a result, the XL3 Hybrid Electric Drive System is on sale now in California for the first time. XL Hybrids also announced the signing of an installation and distribution agreement with Emissions Retrofit Group (ERG), a California company with facilities in Sacramento, Oakland, Redding and Ontario, Calif.

According to the company, fleet evaluations of the XL3 Hybrid Electric Drive System have shown an increase in miles per gallon of approximately 25%. “The XL3 charge-sustaining powertrain is a simple, low-cost way for fleets to boost MPG,” said Clay Siegert, XL Hybrids co-founder and vice president. “Besides reducing CO2 emissions, in most cases, the hybrid system will also lower total cost of ownership for fleets.”

XL Hybrids already counts The Coca-Cola Co. and FedEx among its customers, and says several utility companies across the U.S. are adopting the XL3 Hybrid Electric Drive System for existing and new vehicles as well.

In compliance with its Alternative Fueled Vehicle Strategy, XL Hybrids was chosen to complement its growing fleet of alternative-fueled vehicles, which Liberty Utilities continues to roll out with the goal of reducing emissions, improving air quality and reducing greenhouse gases, as well as decreasing dependence on foreign oil imports.

“Operations are able to begin using the XL Hybrids vans immediately with no driver training or plug-in stations,” said Stephen McCrodan, purchasing manager of Liberty Utilities corporate. “As a fast-growing utility company, we appreciate the easy installation and quick integration into our fleets. We’re looking forward to savings on fuel and operating costs.”

The XL3 Hybrid Electric Drive System installs in about six hours and, according to the company, has minimal impact on operations because there are no plugs, charging or fueling infrastructure, or driver training requirements. The system is available on GM 2500/3500 cargo and passenger vans, as well as Ford E-150/E-250/E-350 vans, and Ford E-350/E-450 cutaways and stripped chassis.