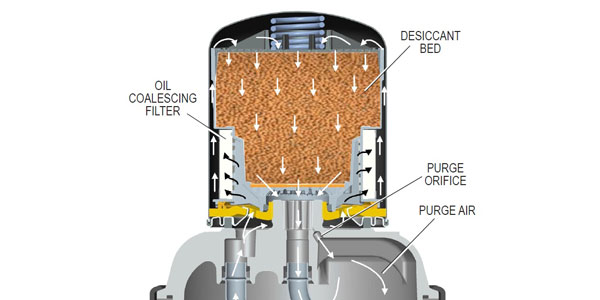 Oil-coalescing cartridges—which remove and purge oil aerosols from the system’s air, along with moisture—provide an extra level of protection for these components, which can be costly to replace.

Oil-coalescing cartridges—which remove and purge oil aerosols from the system’s air, along with moisture—provide an extra level of protection for these components, which can be costly to replace. They achieve this through the use of two specifically engineered mediums: an oil filter and a desiccant to remove moisture, each of which can do its own job, but not the other’s. As more advanced technologies have become the norm, so have oil-coalescing air dryer filters.

According to Richard Nagel, Bendix director of marketing and customer solutions­—air charging, these are the technical questions you should ask when considering a replacement oil-coalescing filter:

“That question regarding oil-coalescing filter placement is especially important because, today, some aftermarket suppliers have adopted the oil-filter-before-desiccant approach, but have neglected to take gravity into account,” Nagel said. “If the oil-coalescing media is sitting on top of the desiccant, the oil droplets fall straight down into the desiccant bed, which means you’re right back to degrading the drying efficiency. That’s exactly why PuraGuard has the oil-coalescing filter in a vertical plane, away from the desiccant, where gravity pulls the drops down to the sump in the cartridge.”

Ask about the desiccant too: Even those desiccants considered good for some applications aren’t always suitable for an air brake application where the dryer cartridge is exposed to high temperatures, water saturation, vibration, wild temperature changes and pressure cycling.

Failing desiccant can begin to clump, and at this point, it not only stops removing moisture but eventually turns into powder that can get into the air system and contaminate brake valves.

“As fleets and owner-operators make their service decisions, it’s a case where saving a few dollars on the replacement part can come back to bite them if air contamination winds up damaging or mitigating the effectiveness of a higher-cost investment like a collision mitigation system,” Nagel said.

This tech tip was contributed by Bendix.

Are you retreading your truck's tires to the right position?