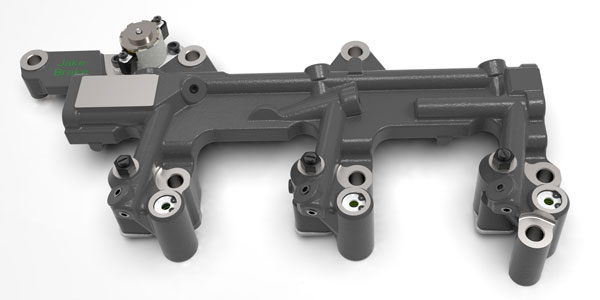 If the name “Jake Brake” has you immediately thinking about the engine braking mechanism that is common on heavy-duty diesels you’re probably not alone. What you might not know, however, is that the same type of technology can now bring the same safety, fuel economy and maintenance benefits to medium-duty engines.

If the name “Jake Brake” has you immediately thinking about the engine braking mechanism that is common on heavy-duty diesels you’re probably not alone. What you might not know, however, is that the same type of technology can now bring the same safety, fuel economy and maintenance benefits to medium-duty engines.

“Engine manufacturers have recognized the performance benefits of compression release brakes and are applying them on medium-duty platforms,” says Gabe Roberts, director of product development at Jacobs Vehicle Systems. “The increasing use of this technology is also a reflection of the higher loads, temperatures and pressures that are part of the design of modern, emissions compliant medium-duty diesel engines.”

Compression release brake technology takes advantage of those engine design attributes, Roberts explains. It operates fundamentally in the same way as a heavy-duty engine brake by opening the exhaust valves after the compression stroke. Therefore, it stands to reason that with higher pressures, the resulting release of compressed exhaust gases slows the engine faster and more efficiently.

“While that is a common benefit, the role of an engine brake is no longer only to slow the truck down safely and put less stress on foundation brake systems,” Roberts says. “In today’s medium-duty engines, for instance, other valve actuation events driven by compression release brakes can enable faster shifting for better performance.

Jacobs is continually developing its compression release brake technology for every generation of medium-duty diesel engine, Roberts notes. Along with changes that utilize different grades of iron and steel, and heat treating processes and other manufacturing improvements, the company is focused on designing its technology to match the steady increase in medium-duty engine service life expectancy.

A key part of that effort is the development of compression release brakes in partnership with engine manufacturers. “Engine brakes are no longer the add-on devices they were years ago,” Roberts notes. “We know what it takes to have a brake that optimizes performance, and by integrating our design with the engine manufacturer’s, we can both build a better performing product. Communication in the design phase is what allows us to get the most performance from the start.”

A recent example of that collective development effort can be seen in Jacobs Engine Brake Model 971 for the Hino A09C engine. The new compression release engine brake is being offered by Hino in the North American market on engines for its 2020 XL Series Class 7 and 8 trucks. The Hino A09 Turbo Diesel is an inline six-cylinder, 8.9-liter engine in 300 to 360 HP ratings.

The Jacobs compression release brake was designed to be fully integrated with the A09 engine’s electronic controls, and it is compatible with the vehicle’s cruise control and anti-lock braking systems. The factory installed brake features two-stage operation and has a two-part housing configuration to help simplify maintenance.

Along with heavy-duty engine brakes and compression release engine brakes for medium-duty trucks, Jacobs offers a range of products to meet the needs of different customers and applications. For example, the Jacobs Exhaust Brake is a lower cost option for providing additional vehicle braking power by restricting the flow of exhaust gases and increasing back pressure to the engine.

Advertisement
In this article:Brakes & Safety Systems