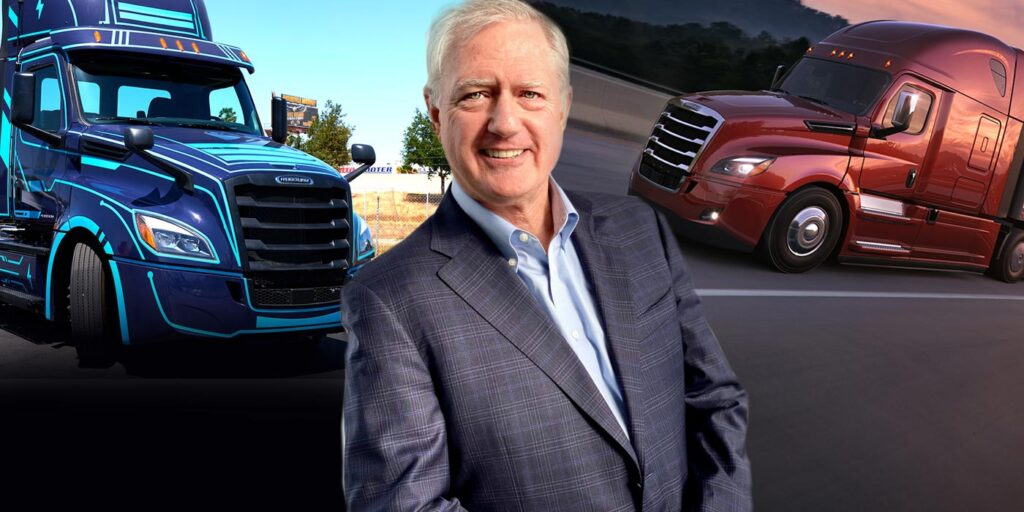 Daimler Truck North America President and Chief Executive Officer John O’Leary is a busy man, especially so on Daimler Truck’s Capital Market Day Nov. 11. Even after spending untold hours speaking from Stuttgart, Germany, to investors about the future of the company, O’Leary was still happy to sit down with the media to help us take a deeper dive into Daimler Trucks’s directives for the foreseeable future. We talk about diesel’s future, hydrogen, supply chain strains and more.

Refocusing R&D away from diesel

Daimler Trucks isn’t planning to pull the plug on diesel anytime soon. Daimler currently has a partnership with Cummins for them to produce the OEM’s medium-duty engines after 2025. Daimler is also seeking heavy-duty engine partnerships to share the required investments needed to implement upcoming emissions regulations.

However, O’Leary said it’s those very emissions regulations, both in the U.S. and abroad, that are guiding the company’s heavy shift to zero-emission technologies.

“By 2039 [in markets like] Japan, the U.S., Canada, Europe… you probably won’t be seeing diesels there. It’s not that no one is wanting them, it’s that they will typically be outlawed by the government,” he said. “We just know that as the demand and the emissions regulations dictate more electric and more hydrogen going forward, we need to have an answer there. But, if customers want a diesel and they’re able to run a diesel in their municipality, state or country we’ll still have those, too, at least up until 2039.”

Daimler Truck says the majority of R&D spending will be directed toward zero-emission vehicle technologies by 2025. This means the company is focusing on not only battery electric vehicles, but also hydrogen-based fuel cell electric vehicles.

One of Daimler’s biggest hydrogen announcements this year is the company’s joint fuel-cell venture cellcentric with Volvo Group. The joint venture will develop, produce and commercialize fuel cell systems for use in heavy-duty trucks as the primary focus, as well as other applications. The partnership with Volvo means that hydrogen fuel cell R&D will be shared, but otherwise O’Leary said the two companies “will remain staunch competitors once the fuel cell leaves the factory.”

The main benefit of this partnership for Daimler, O’Leary said, is not having to spend billions of dollars developing a fuel cell alone.

“We’ve disclosed at Daimler Truck that [we spend] basically $3 billion a year in R&D – and that starts looking even like it’s not enough when you look at the fuel cell and connectivity and autonomous and all those other things going forward,” he said. “So, companies like us and others that we compete against are saying, ‘Let’s find a way to share some of this,’ because any one of us alone can’t afford to develop all the new technology that’s going to be required.”

O’Leary said fleets recognize that with the right level of infrastructure, hydrogen fuel cell trucks are likely a better solution in some applications than battery electric trucks in the long-term.

“Who knows, there could always be that massive breakthrough someday, but at least right now, scientists will tell you that the physics would preclude a battery from having a 1,000-mile range or something like that, which, when you’re driving coast to coast, that’s a problem,” O’Leary said. “Hydrogen takes that kind of range anxiety off the table.”

O’Leary said hydrogen infrastructure actually scales easier and is less expensive than one built for battery electric trucks, and Daimler Trucks’s goal in Europe is to establish a network of 150 hydrogen refueling stations and 5,000 heavy-duty hydrogen trucks by 2030. O’Leary added Daimler’s focus on hydrogen is also partly in response to the fuel’s success in Europe.

“[Hydrogen] is definitely a more advanced topic in Europe. A lot of what you might call [environmental, social, corporate government] topics tend to start in Europe and then over time end up migrating to the U.S. I’d say the same with battery electric,” he said. “The U.S. is probably 18 months or 24 months behind just in terms of the conversation and the awareness of [hydrogen].”

The company signed an agreement with Shell in May to jointly drive the adoption of hydrogen-based fuel-cell trucks in Europe. The companies plan to support the decarbonization of road freight by building out hydrogen-refueling infrastructure and placing fuel-cell trucks in customers’ hands. Daimler also announced two additional hydrogen-centric European partnerships during Capital Market Day: Together with BP, Daimler Truck strives to accelerate the H2 infrastructure development in the UK. In another partnership with Total Energies, the company is likewise aiming to enhance the H2 infrastructure in the major transport markets of France and Benelux.

“Not that hydrogen is going to be put out in large numbers in the next two to three years, but certainly as we approach the end of the decade and we start getting more infrastructure put in place, there’s going to be some serious demand for that,” O’Leary said.

O’Leary said DTNA plans to continue to maintain strict cost discipline and defend its on-highway business while capturing an increased share of the vocational market.

“Even though we’d always had offerings in the vocational space, we had pretty much had our lunch handed to us by the competitors, and we said that’s not good enough. We want to have a product in that space that’s every bit as good as we do in the on-highway space,” O’Leary said.

Right now, the company’s vocational focus is on the Western Star X series of trucks. The 49X launched late last year and the 47X launched mid-2021.

“I think for us that’s a really strong initiative to be able to grow our share. Share isn’t the underlying goal for us, but it certainly is a nice descriptor of how well you’re doing as a business,” he said. “The response from customers so far who have seen them or driven them or own them has been really strong.”

“Raw materials pricing has been a big issue. Being able to get certain components and metals has been possible, but only at a significantly higher price from the suppliers,” he said. “[Micro]chips is the predominant one for sure. And also, the freight carriers that bring freight into our plants are passing their increases on to us. It’s the inflationary wave that’s kind of cycling through the economy right now.”

In May, Daimler AG announced its intent to split Mercedes-Benz as a luxury car maker from its truck unit, Daimler Truck. O’Leary said customer relations have been positive since the announcement, and in the future customers can expect a slew of benefits from the split.

“Going forward, things that we’re doing on the global scale – such as fuel cell development, battery electric development, all the technology that we’re working on – will be assembled and developed at a much higher level, with our own expertise, using the cost base of our global manufacturing output,” he said. “So, what they will ultimately see is better technology at a lower price over time, just as they see today with Detroit diesel engines and the safety systems and Detroit connect.”