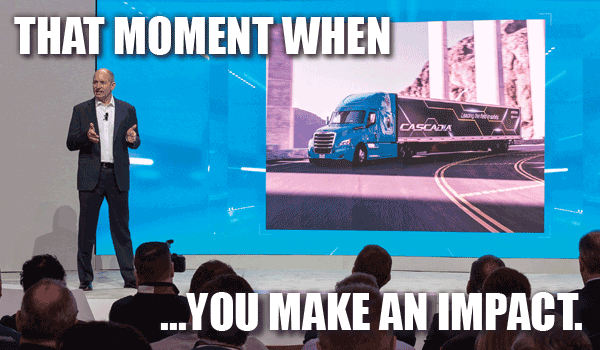 Had Roger Nielsen been holding a microphone, he might as well have dropped it at the end of his presentation. Instead, he’s wired up with one of those hands-free, barely-there microphones that live on a TED Talk stage, which is fitting because the bevy of announcements that Daimler Trucks North America’s (DTNA) president and chief executive officer just dropped alongside Martin Daum, member of the board of management with responsibility for the Daimler Trucks and Buses, were huge developments in truck technology.

Most notable and immediate: the Detroit Assurance 5.0 suite of safety systems will make the model year 2020 Freightliner new Cascadia the first SAE Level 2 automated heavy-duty truck available in the market. That means the truck can automatically control the braking, acceleration and steering systems (under certain conditions). But this is by no means a driverless system, quite the contrary—these are driver-assistance systems.

“The way we imagine it: The truck is never going to be able to navigate everything—you need a driver in the seat,” Roger said. “What we learned with Detroit Assurance 4.0 with Adaptive Cruise Control and full braking on stationary objects was that the fleets loved it. They saw their rear-end collisions go way down; some put the number at a reduction of 95% of their rear end accidents.”

Roger is sitting in the back of a black SUV cruising down a Nevada highway on its way to the Las Vegas Motor Speedway where the DTNA team will put more than 100 international journalists inside the MY 2020 Freightliner new Cascadia; in one demo area’s case, in the passenger seat of a fully loaded Class 8 truck barreling toward car-like barrier with the driver’s foot firmly planted on the gas pedal and our trust fully in the Active Brake Assist collision mitigation system to stop us. Roger’s rear-end collision statistic anecdote is reassuring, to a degree, but it’s a different story when you’re sitting in the truck going 45 MPH and blow past the point where you would have started braking. More on that in a minute.

“After rear end accidents, leaving the lane was the next problem we wanted to address,” Roger explained. “Fleets didn’t just want a lane departure warning with the rumble noise in the speaker—they wanted to take control of the wheel; that truck should know it’s leaving its lane and steer to correct it. And then take it one step further so that when the truck is in the lane, it stays centered.”

Detroit Assurance 5.0’s Active Lane Assist option consists of Lane Keep Assist and Lane Departure Protection. When Adaptive Cruise Control is enabled, Lane Keep Assist supports the driver by using micro-steering movements to keep the new Cascadia centered in its detected lane. With Lane Departure Protection, if the truck begins to drift without the turn signal engaged, the system will counter-steer the truck back into its lane and give an auditory and visual warning. 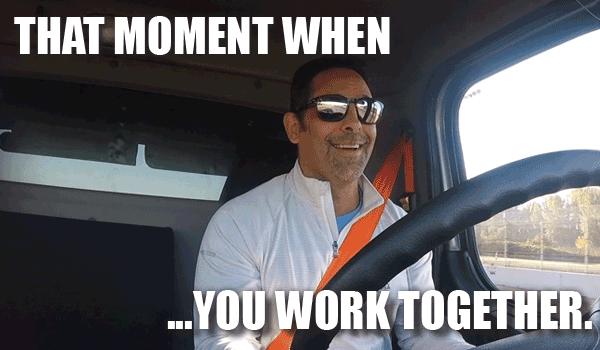 Paul Rosa, senior vice president of procurement and fleet planning at Penske, puts a tremendous amount of trust in his industry relationships—so much so that when DTNA teased the Detroit Assurance 5.0 technology in the Freightliner new Cascadia, Paul found himself sitting behind the wheel as the demonstration driver.

“They actually called for a volunteer to drive the vehicle toward the stationary object and trust that it was going to stop, but no one raised their hand. So they called me out,” he said with a laugh. “And what did I do? I accepted the challenge. So here I am, in the cab, and—it was funny—I didn’t want to go the speed that they wanted me to because, naturally, you want to slow down; you want to hit the brakes, but they said, ‘No, just let it go. It will stop.’ It will stop. And gosh darn it, the darn thing stopped on a dime. It was tremendous.”

Sure, it’s more extreme (but much cooler) than the clichéd team-building exercise of standing on a chair and falling backward, trusting that others will catch you, but it’s an example of how DTNA has grown its customer relationships. Working hand-in-hand with customers is more than a slide in a PowerPoint for Roger.

“It’s the way I run my life. Whenever I go somewhere, I always make sure I go see a customer,” he said. “I ask my staff: ‘Can you find a customer between the airport and the thing I have to be at?’ We’ve really tried to step up our game to listen when the customers talk with us.

“We were a small company when I started in 1986, and every customer knew everybody in the company,” Roger continued. “Now customers are measuring us by their own customer experiences like: How many times do they have to call us to get a problem solved? It’s embarrassing some of the numbers they have told me. It’s like, ‘You have to call that many people to get one simple problem solved?’ So we’re turning around the whole company culture to understand the customer experience; one phone call and your problem is solved.”

Paul played a large role in that realization when Roger took the DTNA president and CEO reins in the spring of 2017.

“When he became the new CEO, Roger was very interested in learning from his customers what Daimler Trucks could do for them,” Paul recalled. “We had some good candid conversations, Roger and myself, as well as Daimler and Penske, on what was needed. And the first thing, I think, was that they needed to get closer to their customers. Over the past several years, industry was expanding and growing, and by virtue of that, they were growing their market share and they were kind of just taking care of business. As a result of those conversations he initiated the first customer experience day.” 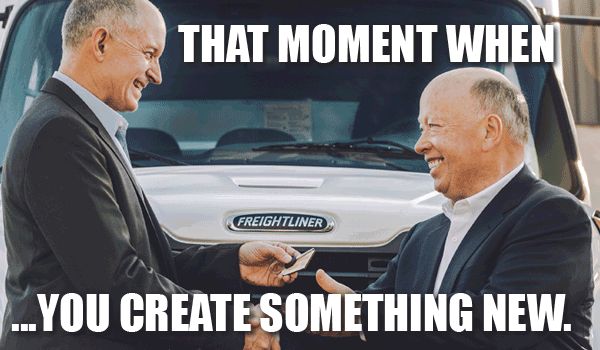 “Customers hate it when they hear about a product development for three or four years and then we dump the solution in their laps and say, ‘Here, aren’t you happy?’ Then they say, ‘No, that’s not what I wanted.’”

Consider electric truck development. OEMs are talking about it; suppliers are talking about it; you’re talking about it; yet there are more questions than answers. To answer the questions together, DTNA created an Electric Vehicle Council that connects 30 customers, competitors in their own right, to develop the product and business case that will, hopefully, make electric trucks a successful reality. The council was convened for its inaugural meeting last fall and took a deep dive into the electric vehicle ecosystem with DTNA experts and test drove the electric Class 8 Freightliner eCascadia and medium-duty Freightliner eM2 for the first time.

From there, DTNA announced its Electric Innovation Fleet, which includes Penske Truck Leasing and NFI. The former will take delivery of 10 eCascadias and 10 eM2s for use in California and the Pacific Northwest, while the latter will take delivery of 10 eCascadias for drayage activities from the ports of Los Angeles and Long Beach to warehouses in California’s Inland Empire. In December, DTNA delivered the first of those 30 trucks—a Freightliner eM2—to Penske. 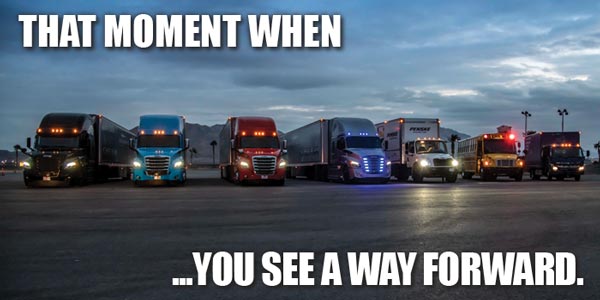 Back on stage during DTNA’s pre-CES media event, Martin and Roger brought several definitive answers to truck technology questions that had been posed in the past several years. The first was related to its MY 2020 Freightliner new Cascadia SAE Level 2 automated truck:

DTNA’s automated product development will jump from Level 2 to Level 4, skipping over bringing Level 3 automated driving technology to the market.

A quick recap on the SAE automated driving levels so that we’re speaking the same language:

(You can read the full details here.)

The keyword can be found in Level 4’s definition: “without.” This means that the truck would be responsible for operation. So DTNA said that within 10 years, it’s moving from what is available today with Detroit Assurance 5.0, in which the driver still has to be engaged in the operation (i.e. hands on the steering wheel even with Active Lane Assist enabled), to a Level 4 truck that will, essentially, drive itself in certain conditions.

“In Level 3, the truck is not fully in control and the driver is not fully in control,” Roger explained. “When the truck can’t navigate a situation, we don’t want the driver to have to panic to take over operational control. There’s too much of a feeling of, “Where am I, and what am I doing?’ That’s what happens in Level 3. In Level 4, if a truck gets into trouble, it has a Keep Safe mode sequence, and it’s always: ‘How do I keep the equipment safe and the public safe?’

The other technology question that DTNA answered for itself concerned platooning, electronic coupling of two or more trucks with significantly reduced distance between them to, in theory, improve aerodynamics and therefore save fuel. Here’s the official statement:

“Results show that fuel savings, even in perfect platooning conditions, are less than expected and that those savings are further diminished when the platoon gets disconnected and the trucks must accelerate to reconnect. At least for U.S. long-distance applications, analysis currently shows no business case for customers driving platoons with new, highly aerodynamic trucks. Daimler Trucks will, of course, remain committed to all partner projects that are still ongoing.”

“Platooning is disappointing because we really thought it could be a fuel savings of 3% to 5%, but the trucks spend so much time chasing each other to get connected. One of the trucks has to slow down and then speed up and the other truck has to speed up. It frustrates the drivers.

“We have two projects that we’ll still continue developing because the next step up is not platooning, but you’ll hear us talk about the word ‘convoy.’ That is where truck number one has a driver and truck number two doesn’t. They’re virtually connected and linked but we still don’t know what would be the on-highway interruptions, interferences from the general public.”

Roger stepped out of the black SUV at the Las Vegas Motor Speedway, traded his black blazer in favor of a fleece jacket that protects against unseasonably cold Nevada wind cutting across the blacktop and headed into the staging tent with a wide smile, ready to tackle a full day of product demos and conversations. DTNA has said time and time again that truck development continues to be an evolution. They’re traveling down the product and technology development road and even though they close one exit, they look to the next one down the line. And while the road ahead is long, DTNA’s renewed commitment to its customers and new product development strategy will be how it navigates to its next mile marker in an ever-shifting trucking environment. 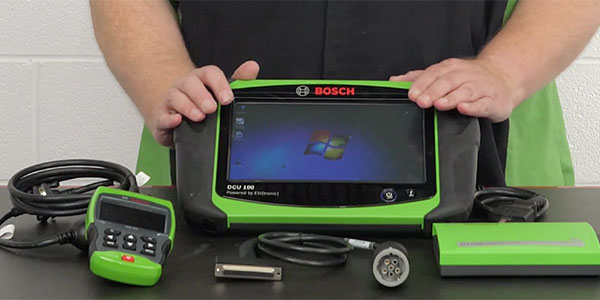