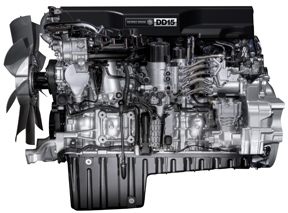 After nearly five years and $1.5 billion in development, the new heavy-duty Detroit Diesel DD15 engine was introduced last week at the Detroit Diesel plant. The DD15 displaces 14.8L, and is a 6-cylinder, in-line design. It is intended for all heavy-duty, North American truck and coach applications, and features improved fuel economy and enhanced performance, the maker says.

The DD15 achieves its goals through the application of a new amplified common rail system (ACRS), as well as innovative turbo compounding technology. This engine is the first in a series of new heavy-duty engines from Detroit Diesel that eventually will cover three displacement categories: 12.8L, 14.8L and 15.6L.

The market launch of the DD15 in the Freightliner Cascadia will take place in the second quarter of 2008, followed by the Freightliner Century S/T and Columbia models and the Sterling Set-Back L-Line and A-Line.

In time, engines sharing this design will be available in all Daimler Trucks heavy-duty models around the world, including Mercedes-Benz and Mitsubishi Fuso trucks. Ultimately, this Engine Platform will replace four, distinct, engine series used today by Daimler Trucks brands globally.

Designed for the North American roads, the DD15 will be offered in output and torque variants from 455 HP to 560 HP and 1,550 to 1,850 lb./ft., including dual torque ratings for special applications. The DD15 anticipates our customers’ needs for fuel consumption, responsiveness, pulling power, maintenance costs, and environmental sensitivity across North America.

“The DD15 is a best-in-class engine that embodies what the Detroit Diesel brand is all about: performance and efficiency,” said Chris Patterson, president and chief executive officer of Freightliner LLC. “Paired with our trucks, financing, and an expansive service network, DD15 is destined to make our customers even more successful in the years to come.”

With its combination of exhaust gas recirculation and a particulate filter for reduced emissions, the DD15 is tailored to North America’s EPA ’07 emissions regulations, and its advanced design will make it ready to take on the upcoming EPA 2010 standards with a simple downstream selective catalytic reduction (SCR) device that optimizes fuel efficiency while reducing harmful NOx emissions, the maker says.

“Instead of revamping one of our current engines to comply with EPA standards, we designed a brand-new platform that takes all of the emissions requirements into account,” said Jim Gray, Detroit Diesel program director for the DD15. “The result is an engine that offers both power and fuel savings in an EPA ’07-compliant package.”

“The world-class attributes of this new engine platform were obvious during its development,” Gray said. “This intercontinental development process involved close cooperation among Daimler engineers around the world.”

DD15 was designed to offer best-in-class torque response. Early internal and driver testing has significantly exceeded expectations. Features of the DD15 that contribute to this enhanced performance include the Amplified Common Rail System (ACRS), low-inertia dual overhead hollowed camshafts and a compact, simplified turbocharger. In fact, the DD15 exhibits up to 75 percent better torque response than the current Series 60 engine. Torque response is measured by comparing relative times required to reach peak torque levels on demand.

One of the central attributes of the new DD15 is clean and efficient fuel combustion. This is based on the first electronically controlled ACRS used in commercial vehicles.

This type of high-pressure injection system with a common rail system inherently runs quietly. ACRS is the first common rail system that controls the entire injection sequence at any operating point. As the highest pressure is only generated in the injectors, the injection processes are extremely stable. This results in quiet, refined operation with low fuel consumption and reduced emissions, according to Detroit Diesel.

The performance of the DD15 is due in part to the combination of a turbocharger with intercooler and turbo compounding technology. At the rated engine speed of the DD15, the turbine reaches a rotation speed of more than 40,000 RPM. Power is transferred to the gear drive, and therefore to the crankshaft, via a shaft and a hydrodynamic coupling. This arrangement produces a uniform and smooth crankshaft rotation despite the higher torque. Additionally, fuel consumption is reduced by up to five percent compared with a similarly spec’d Series 60.

With a wide range of eight outputs and four torque variants, there is a version of the new DD15 to suit any heavy-duty application. The following range of horsepower and torque ratings will be available in the DD15 when series production commences:

During development, the DD15 was subjected to intense trials under the most extreme conditions. More than two dozen units were endurance-tested in the United States, Germany and Japan, running for well over 100,000 operating hours –– the equivalent of several million miles on the road.

A total of 20 tractor-trailer combinations are currently undergoing road trials in the United States, Germany and South Africa, and have jointly covered approximately 3.5 million miles to date. Five of the combinations operating in this fleet are intentionally overloaded, tipping the scales at 130,000 lbs., while other test trucks are solo units. The road trials are conducted in all climatic conditions, ranging from the Arctic winter to hot desert regions. Twelve more trucks are performing everyday hauling operations with customers.

The design of the DD15 is based on six vertically arranged in-line cylinders. With compact dimensions and a length of only 56.1 in., the engine not only suits conventional designs but also fits in cab-over-engine trucks. For high pulling power, the DD15 has a bore of 139 mm and a stroke of 163 mm, which leaves stroke reserves for future increases in swept volume.

With a cast-iron crankcase, the DD15 is one of the most robust and durable engines on the market. The crankcase features both horizontal and vertical ribs for great rigidity, with the additional benefit of reduced noise. The total engine oil capacity is 47 qts. The oil level can be checked using a dipstick or with an available oil level sensor linked to the motor control module. Oil consumption and blow-by losses are minimized due to the engine’s rigid pistons and crankcase, thereby lowering costs and improving environmental compatibility.

As seen in the direction of travel, the turbocharger, turbo compounding unit, starter and the crankcase ventilation are integrated into the crankcase and are arranged on the right side of the engine. Grouped on the left for ease of maintenance are the motor control module (MCM), oil cooler, a module with fuel filters, the fuel pump and the air compressor.

Detroit Diesel has developed an updated version of the Jacobs engine brake, which is integrated into the engine as a design feature, making it both highly effective and quiet in operation.

As the “brain” of the engine, the motor control module (MCM) not only interprets the driver’s performance requirements via the position of the gas pedal, but also controls and monitors all of the engine functions, from the temperature of the intake air to the start and sequence of fuel injection. The control module also uses sensors to continuously monitor such stats as oil level, the position of the crankshaft and camshafts, the rate of exhaust gas recirculation and more.

“Detroit Diesel has a long history of industry leadership in electronic engine management system development. In fact, the Series 60 was the first heavy-duty diesel engine to feature fully electronic control from design inception when it was introduced 20 years ago,” Gray said. “The DD15 follows this tradition: it offers an enhanced version of the MCM system called DDEC VI.”

With this comprehensive monitoring, the DD15 consistently runs in its optimal operating range resulting in outstanding performance, lower fuel consumption, a longer operating life and reduced exhaust emissions says the maker. Moreover, the motor control module prevents critical operating conditions that could damage the engine from occurring. The module also exchanges information with the onboard electronics. The driver is made aware of any irregularities, which can be easily pinpointed and repaired.

Reduced lifecycle costs are another significant feature of the DD15 because of its low fuel consumption as well as reduced maintenance costs. Service intervals are every 40,000 miles, and the engine is easy to maintain. For example, the oil filter, oil filler pipe and oil/water cooler are conveniently grouped into an oil module on the left side of the new DD15, with the coolant pump, coolant filter and thermostat installed in the immediate vicinity. Also on the left side, a compact fuel filter module accommodates the pre-filter and main filter, as well as the water separator for the fuel system. Top load cartridge oil and fuel filters are easily accessible and cleaner to change. They also are more environmentally friendly to dispose.

Knowing how to respond can help you keep your heavy-duty diesel engines in the best shape possible. 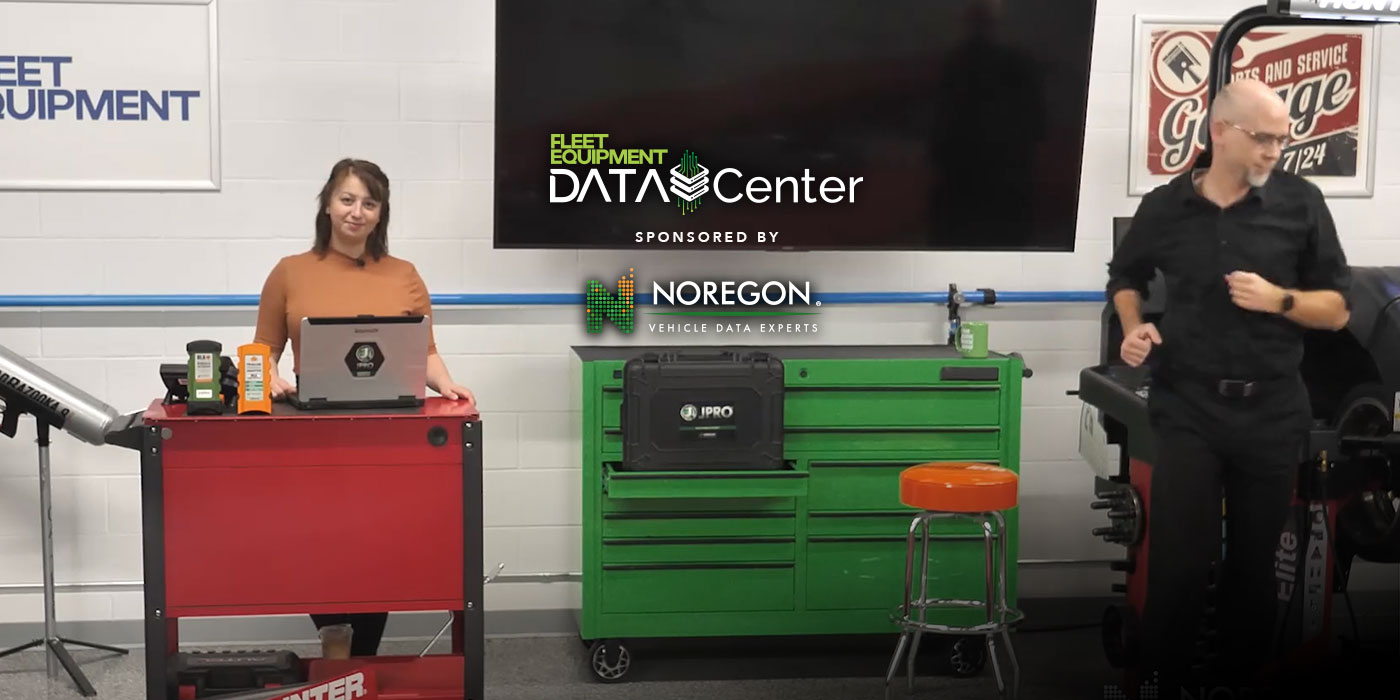