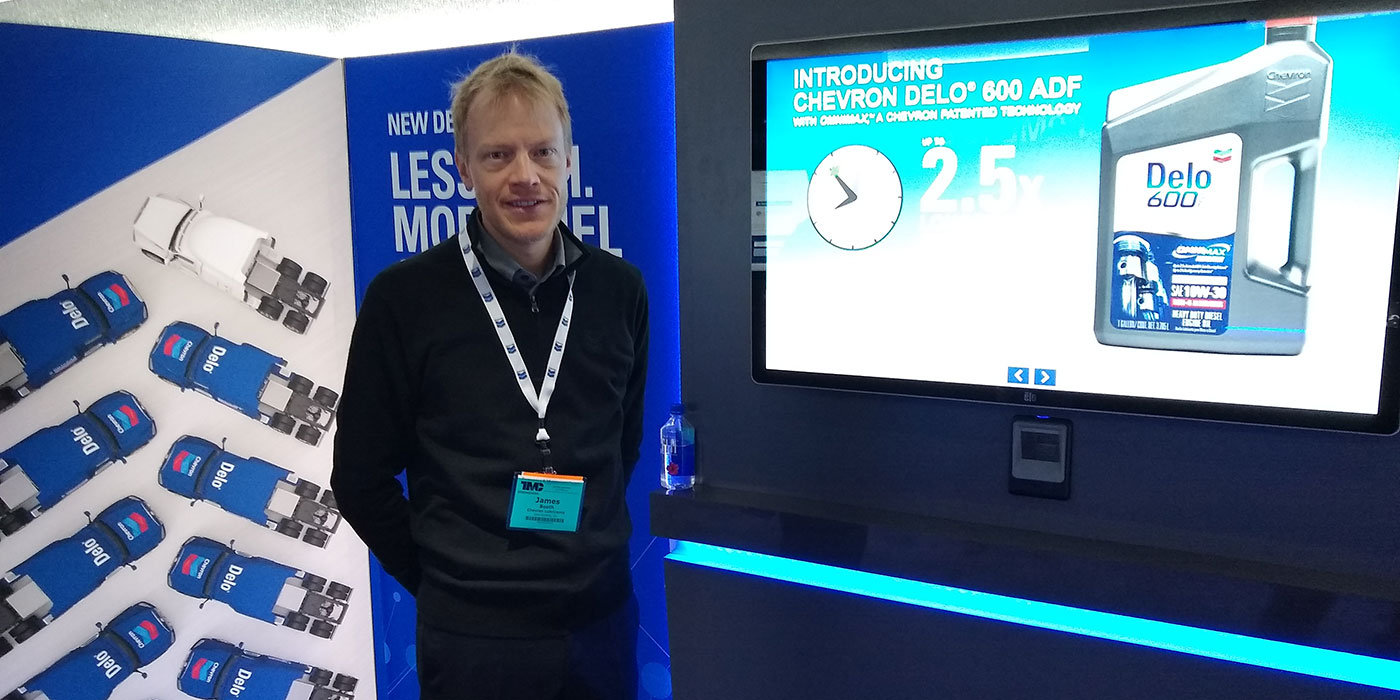 It might not seem as sexy as electric truck development or the latest in automated driving technology, but diesel engine oil formulation is complex and hugely relevant as engine protection, increased efficiency and even aftertreatment service reduction is paramount to running trucks.

Wait a minute: Aftertreatment service reduction? What does that have to do with diesel engine oil?

It’s the question I put to James Booth, Chevron’s commercial section manager, North America, who stood in Chevron’s rolling Traveling Technology Lab, an expanding trailer that opens up to show off the technology that went into the development of Chevron’s Delo 600 ADF, which, as Booth explains, cuts down on ash buildup by 60%, leading to increased life for the Diesel Particulate Filter (DPF) and reduced maintenance costs. He points to the screen behind him that cycles through today’s aftertreatment battle against soot and ash. On one hand, soot is burned away through passive and active regeneration; ash, on the other hand, is a different story.

“Ash cannot be burned away using regeneration,” he said. “The only way to remove ash is by thoroughly cleaning the DPF, and that means higher costs and more downtime for fleets.”

The dirty secret is that 90% of incombustibles, like ash, are derived from engine lubricant additives. That’s the problem Chevron set out to tackle with its reduced-ash Delo 600 ADF diesel engine oil. So how’d they do it? Booth took me on an oil formulation deep dive. So come along for all the engine-protection, aftertreatment service-reduction info.

Booth: This Traveling Technology Lab is a way to introduce the ash-reduction formulation topic. Formulating a new oil can take up to 30 engine tests and maybe up to 50 bench tests. That process can be very expensive. Anything from $1.5 million up to $8 million, and can take from nine months to two years to actually develop, depending on all the specifications and OEM approvals you need to obtain.

Booth: In reality, within formulating, you’re dealing with maybe 100 or 200 different options, and the range of concentration is infinite, essentially.

[He points to a demo station where you can input your own mix of additives into demo software and see the results. Though simplified, it presents the same formulation questions that Booth and his team face.]

It’s interesting to see the different interactions we have with people who go through this simulation. Some say, ‘Well, I don’t need anything fancy’ and just put in the minimum. But when they do that, it doesn’t pass the test. Another person will say, ‘I want to baby my equipment, and I would like the best of everything,’ but that also doesn’t lead to a passing result.

FE: So what’s the formulation secret?

Booth: The analogy I would use is cooking. It’s very much like ingredients. You may have 10 ingredients in the kitchen that you really like, but you’re not going to always use them all at once because there may be some conflicting flavors, or tastes, or textures. What this leads into is a conversation about the importance of having access to the right ingredients, but also knowing how to put them together. And if you do that incorrectly, you can have substandard performance or not really be maximizing the potential out of those ingredients in the formulation.

FE: In the way of ingredients: When formulating for the latest CK-4, FA-4 API category, for example, how much of your own lubrication packages do you do internally and how much do you work with additive companies like Lubrizol or an Infineum?

Booth: It’s a combination of both. We work with certain partners on particular projects where there’s good alignment. Some of that is product development, which is closer to commercialization. Then there are other projects that are more long-term, strategic in nature or technology development. An example of that strategic development would be Delo 600 ADF. That started as a question an OEM brought to us: ‘What is the feasibility of being able to formulate an oil that doesn’t use as many metallic additives?’

It started as more of an intellectual exercise and then we started to test the concept. In a number of areas it worked very well, but there were a few areas that needed additional work, and then we worked through those technical challenges. When we get to a point where we have something, we ask: How do we then move this to something that’s commercially viable? Sometimes that means working directly with our partners.

FE: Getting back to the formulation details: What are the tradeoffs? What decisions do you have to weigh when creating a new formulation?

Booth: It’s a multidimensional puzzle. You’re ‘for’ is what the cause and effect is going to be within the formulation. The one that a lot of people do focus on is durability vs. fuel efficiency, because there’s a viscosity element. The viscosity element is so dominant, so you lower viscosity, reducing the hydrodynamic drag and friction. In doing so, you lower the film thickness, and therefore it’s important that you don’t compromise durability. Then, that requires specific action on formulating for the anti-wear component.

FE: Is Delo 600 ADF the first time you’ve focused on impacting a component outside of the engine? In this case, the aftertreatment system?

Booth: Right, we’ve expanded the narrative from not only talking about the protection of the engine but also aftertreatment systems. In terms of the technology that we’ve used to formulate an ash-reduced diesel engine oil, we get the: ‘Since the sulfated ash level or metallic content is lower, did you just simply take stuff out? Are you compromising something?’ And the answer is absolutely not. In fact, we’ve unlocked some additional potential.

FE: A quick clarification to make sure I’m understanding this correctly. Outside of the ash-reduction technology, you’re still meeting CK-4 API standards as well as OEM standards, so it’s okay to use?

Booth: Yes. And a good point to note. Over the years, there has been the lowering of the ash level but it hasn’t changed since 2006 with the introduction of CJ-4. I’m not saying that it should have been done or not, but that is a reality. So, 1% sulfated ash is a maximum level, and it has become the industry norm in terms of where most formulations in the market are; they’re between 0.9% and 1% ash. It’s a maximum, there’s no minimum requirement of ash in the formulation. We meet or exceed those performance requirements and we’ve received approvals for those. And suddenly OEMs have been very curious and interested in understanding more about how we manage to deliver a reduced ash diesel engine oil because it is such a unique formulation and really pushing the frontier of what’s possible of the formulation forward.

Ryder selects Goodyear as preferred tire supplier
Connect with us