Separating from the pack: ERL Intermodal is meeting its customers’ needs with the right equipment and business practices 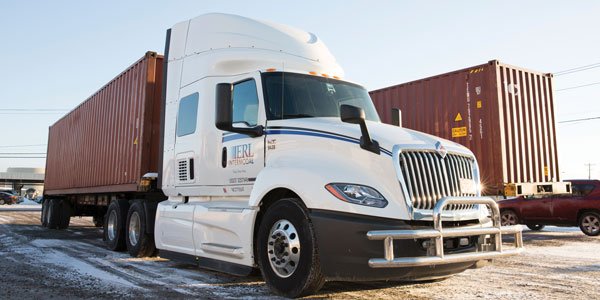 For Steve Sperbeck, general manager at ERL Intermodal, it’s all about confidence. In the fall of 2017, for example, the company that was originally named Empire Recycling Logistics took the step of rebranding itself as ERL Intermodal to better reflect the import/export container hauling nature of its business.

“We wanted to be known for the industry we serve and the service that we provide to customers,” Sperbeck explains, “and the growth we’ve been experiencing is definitely being driven in part by that decision. Less than 18 months ago we had 24 trucks. Today, we are fielding 36 tractors and we’ve ordered 14 more for delivery by this summer because we’re picking up about one new customer every week.”

Equally confident in its choice of tractors, ERL Intermodal has switched its entire fleet to International trucks, including new LT Series models with the manufacturer’s A26 engine. Also in the operation are some 2016 model year ProStars, which will be replaced at the end of their planned five-year trade cycle.

“Our newest tractors are replacing 2012 and 2013 units from two OEMs that had two different engines,” Sperbeck relates. “We had a number of engine issues with those tractors and always had trucks that were out of service. We’re big on researching technology, though, so we had confidence that International had set the bar high and done its homework when it came to the LT Series and the A26.

“We used that knowledge and went all in, and on the first day we could order them we began buying LT Series tractors with A26 engines,” Sperbeck continues. “Those units have not disappointed us. In fact, our fuel economy has skyrocketed from 5.2 to 7.75 MPG, and those added fuel savings are profit.” 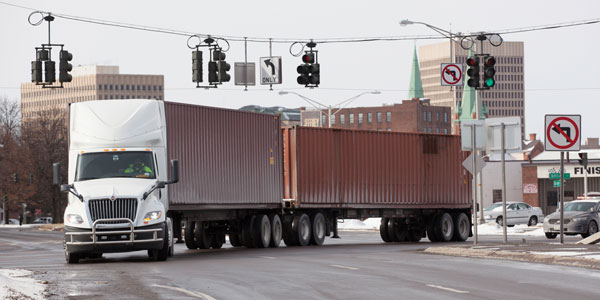 “Each tractor in our fleet runs about 125,000 miles per year,” Sperbeck explains, “and every increase of one mile per gallon at our current fuel price saves us $1,000 per truck annually. In the fourth quarter of last year we added $65,000 to our bottom line in fuel savings alone—and that’s with just half the fleet with A26 engines and LT Series tractors. With those savings, the trucks almost pay for themselves.”

Another factor for ERL Intermodal is the service it receives from its local dealer, Stadium International Trucks in Syracuse, N.Y. While the fleet’s three technicians handle inspections and preventive maintenance from 5 a.m. until 10 p.m. daily, and make all chassis repairs, the dealer handles warranty work and repairs.

“Stadium International is a big part of the confidence we have in the manufacturer,” Sperbeck says. “Maintenance and repairs, and downtime when a truck breaks down on the road, almost put us out of business a few years ago. With the dealer’s support and the improvement in uptime and fuel savings, we’re in a much better place.”

ERL Intermodal is also keeping costs down by effectively addressing driver issues. “We have very little turnover, less than 20%, and we have a waiting list for new drivers,” Sperbeck says. “Turnover hurts productivity and affects customer satisfaction, so we try not to give our drivers any reason to leave.”

Among the initiatives at ERL Intermodal that Sperbeck says help improve driver retention and establish a stable workforce are some of the highest driver pay rates in the region, and the company’s drivers are generally home every night or every other day. In addition, the fleet has equipped its newest tractors with battery-powered auxiliary heat and air conditioning systems to improve driver comfort without idling the engine. 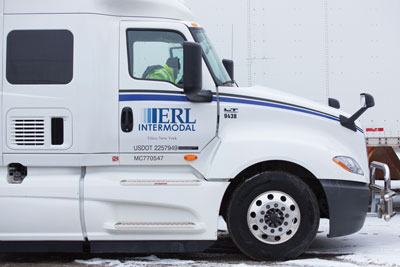 ERL Intermodal has also made safety a focus of its latest specs. New tractors in the fleet are equipped with Bendix ABS and Automatic Traction Control as well as Bendix Wingman Fusion systems with Adaptive Cruise Control, Collision Mitigation and Stationary Vehicle Braking, and Stationary Object Alert and Lane Departure Warning capabilities.
The trucks are also fitted with Lytx DriveCam systems to help monitor and address unsafe driving behaviors.

“Once drivers get used to these systems they help eliminate a lot of the issues,” Sperbeck says. “We also govern our engines at 63 MPH. What we found was that by operating at that speed we don’t really lose time—maybe 15 minutes at most when traveling in a 300-mile radius of our headquarters. Compared to white knuckle driving at higher speeds, with slower speeds drivers are more relaxed, and safer.”

Intermodal is also reaping the benefits of having adopted Electronic Logging Devices (ELDs) long before the ELD mandate.

“We were ready because we began using electronic logs four years ago and switched to Geotab ELDs this year,” Sperbeck relates. “ELDs hit the intermodal segment of the industry hard because there is a big learning curve for fleets that have never used this technology before, and it forced smaller companies to leave the market rather than deal with it, or incur the cost.”

That has also led to the capacity crunch that ERL Intermodal is addressing by expanding its fleet size and by offering customers incentives to increase their business with the carrier. “We continue to grow by providing dependable drayage services for a customer base from a variety of industries,” Sperbeck says, “and we’re always looking for opportunities and ways we can be the carrier of choice for our customers.”