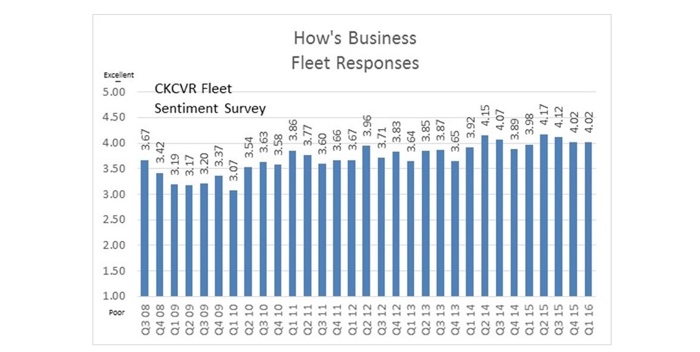 The results of the quarterly Fleet Sentiment survey are in, and they report a good fleet environment entering 2016. All measures of the fleet environment as reported by the 48 fleets participating in the survey show that most are continuing to see good demand levels for their services along with high equipment utilization rates, as seen in the graph above. The driver shortage is one area that continues to especially challenge OTR for-hire fleets.

Other results for the Q1 2016 Fleet Sentiment Survey:

“Results of our Q1 2016 survey look remarkably like the same period last year,” said Chris Kemmer of CK Commercial Vehicle Research. “Fleet capacity vs. demand and other fleet environment survey results matched very closely to Q1 2015. Early year medium and heavy duty equipment buying plans were somewhat uneven when compared to Q1 2015. Most respondents indicated their annual 2016 purchases would be similar to 2015; however we heard from one major fleet that is cutting purchases for both trucks and trailers at least in half, so that could definitely be a concern.”

Advertisement
In this article:Fleet Sentiment Report