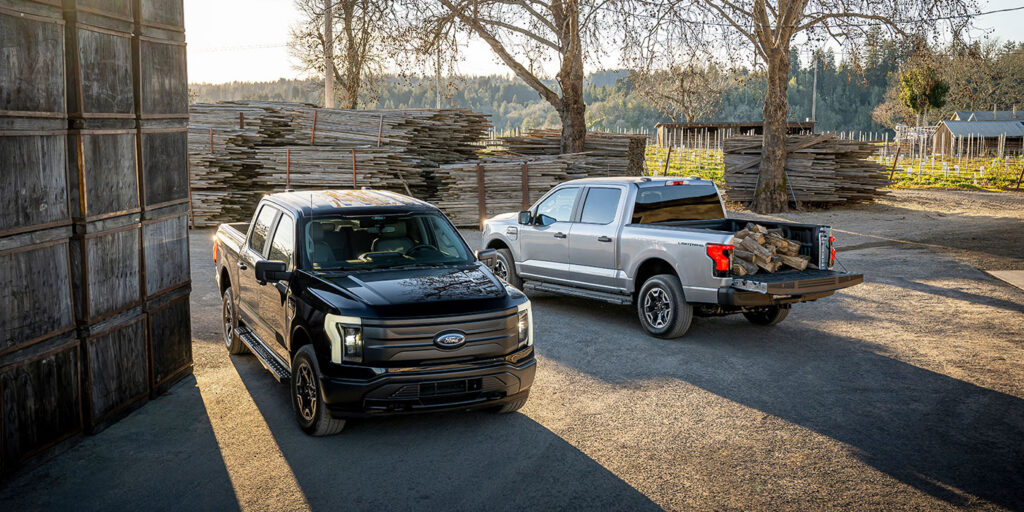 The new 2022 Ford F-150 Lightning bares a striking resemblance to their tried and true F-150 model. This deliberate design, according to Linda Zang, chief engineer, Ford Pro, was included as a way to ease the risk mentality that, oftentimes, sways people from trying something new. The all-electric F-Series vehicle features impressive performance, mileage and productivity. So whether you’re working hard or playing hard, the truck’s impressive performance can get the job done. The best part? No tailpipe emissions. Not to mention the sleek, but traditional, body style and operations of the established Ford F-150, their most popular truck for over 45 years.

The series lineup features four models including the Pro, XLT, Lariat, and Platinum. While features on the models vary, each comes equipped with an impressive set of features such as dual electric motors and four drive modes.

With a frunk (front truck), full bed in the back and spacious interior, there is no shortage of space with this EV. The battery, which lies beneath the cab, can be utilized for more than just transportation, too. It can be used to power work equipment or assist in charging tools. As a matter of fact, a fully charged battery could support the needs of a home for up to three days, or ten days if rationed with Ford Intelligent Backup Power. So, how does the charge capacity translate to range? Here’s a breakdown to simplify:

The new series exceeds the expected F-150 standards and went through rigorous testing to ensure the performance for everyday use, the company noted during a press conference held in California. Compared to its gas-powered predecessor, the fully electric F-Series requires an estimated 40% less in maintenance costs over the course of five years or 75,000 miles allowing customers to save some green while going green.

I had the chance to hop behind the wheel of the F-150 Lightning. Here are a few quick impressions.

After hopping into the driver’s seat, I waved someone over for assistance. The reason, while embarrassing, is probably something others can relate to. The rattle of an engine and slight vibration of the steering wheel is an indication of power most drivers have become accustomed to. I quickly forgot about the lack of engine in the front and the silent battery underneath…

With a 400 pound weight capacity and 14.1 cubic feet of additional storage, the engineless frunk provides a lot of extra space whether it be for equipment, supplies or simply a weekend getaway.

In the back, storage anxiety can be laid to rest in this bed with a 5.5-ft. cargo bed and 2,235 lbs. maximum hauling capability.

Let there be light

Whether there’s work to be done under the sun or under the stars, lighting options are available on each model. With LED strips on both sides of the truck, the front and the rear, customers can illuminate their workspace by turning on all or some of the lighting bars from the mobile app or dashboard screen. Additional lighting can be found in the truck bed and within the hood of the frunk.

Ford aims to redefine the meaning of remote work. With the Ford F-150 Lightning, there are no limits to where work can be done. The tailgate makes for a perfect work station no matter the job. With a media holder, additional lighting, power outlets and built in cup holder, the workday can be accomplished anywhere.

Tow your own way

The technology package included in the Pro, XLT and Lariat models keeps the driver in control through the use of a 360-degree camera, trailer brake control, onboard real-time scales and back-up assist sensors. These safety features came in handy more than once while completing the tour.

I couldn’t have said it better myself.

I can confidently say after a couple of hours in the truck that it can best be described as fast, precise and reliable. While working its way up the hills, the impressive horsepower showed no issues making the steep climb while keeping up with the flow of traffic. The all-electric 4×4 drivetrain made for a smooth ride regardless of topography.