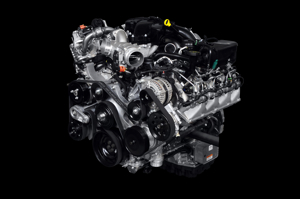 “This is a significant milestone for an engine that was introduced just a few years ago,” said Doug Scott, Ford Truck group marketing manager. “Demand for the engine has outpaced our expectations."

The 6.7-liter Power Stroke V8 diesel engine delivers 400 HP at 2,800 rpm and 800 lb.-ft. of torque at 1,600 rpm, along with fuel economy, the company says the egine also adds more fueling flexibility and easily meets stringent emissions requirements. The 6.7-liter diesel shares Super Duty’s reliability and durability while enabling up to 24,700 lbs. towing capability for F-450 pickup and up to 26,600 lbs. for F-550 chassis cab.

Ford is the only heavy-duty pickup truck manufacturer that designs and builds its own diesel engine and transmission combination, ensuring the powertrain will work seamlessly with all chassis components and vehicle calibrations, from concept to driveway. This approach enables Ford engineers to optimize the vehicle’s performance across the entire lineup.

According to Ford, benefits of the 6.7-liter Power Stroke V8 turbocharged diesel engine include:

– Compacted graphite iron engine. Stronger than cast iron, the block structure is optimized for reduced weight and maximum strength to meet the demands of higher horsepower and torque

– Turbocharger is uniquely center-mounted on a pedestal low in the back of the valley for improved NVH control.

– High-pressure fuel system injects fuel at more than 29,000 psi. The system delivers up to five injection events per cylinder per cycle, using eight-hole piezo injectors to spray fuel into the piston bowl. The direct-injection system is calibrated and phased for optimum power, fuel efficiency and NVH performance.

– Compatible up to B20 biodiesel, allowing greener fueling options of up to 20% biodiesel and 80% petroleum diesel.