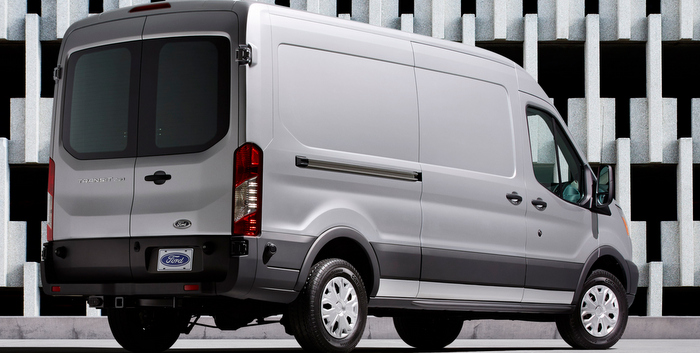 Although the Ford Transit full-size van is brand new to North America, sales are off to a quick start. In June, deliveries were made of 490 vehicles and the manufacturer is now expecting that number to rise rapidly.

Production of the eventual replacement for the E-Series van—first sold in 1961 as Ford Econoline—began at the end of April at the company’s Kansas City Assembly Plant. Ford also produces Regular, Super and Crew Cab versions of the F-150 pickup at the facility and has invested $1.1 billion to retool and expand the plant for Transit production.

The all-new 2015 Ford Transit is offered with three engine choices, including a standard 3.7-liter V6 that can also be fitted with a compressed natural gas and liquefied petroleum gas prep package. Also available is a 3.5-liter EcoBoost gasoline engine with a 400-lb./ft.-torque rating for extra cargo-hauling capability. A 3.2-liter Power Stroke five-cylinder diesel that provides 90% of its peak torque from 1,500 to 2,750 RPM is offered and is equipped with a variable geometry turbocharger. Standard on all models is a six-speed SelectShift automatic transmission with tow/haul mode.

Extensive testing of Transit vans, according to Ford, has proven the durability of the vehicle’s all-new unibody structure that makes extensive use of boron steel for weight savings and improved torsional stiffness. Transit was also tested for more than seven million customer-equivalent miles at Ford proving grounds and by fleet customers in North America.

Ford also notes that the 3.5-liter EcoBoost and 3.7-liter V6 gasoline engines available in Transit models have been proven in more than 700,000 Ford F-150 trucks since 2011. Additionally, the 3.2-liter Power Stroke diesel underwent more than 4,000 hours of dynamometer testing specifically for Transit, including running at maximum power for 750 hours or the equivalent of 14 nonstop round trips from New York to Los Angeles, simulating 10 years of service across 150,000 miles, and in environments with temperatures of 40 degrees below zero and altitudes of more than 14,500 ft.

Transit is offered in van, wagon, chassis cab and cutaway body styles, including three body lengths and two wheelbases for van and wagon versions, along with three roof heights. The vans can be specified for a maximum cargo capacity of 487.3 cu. ft. and can provide as much as 4,650 lbs. of maximum payload capacity—at least 600 lbs. more compared to E-Series vans—and a maximum towing capacity of 7,500 lbs.

Transit high-roof van models offer a cargo area height to make loading easier, and high-roof wagon models enable passengers as tall as 6 ft., 4 in. to stand upright. Transit also has a high rear door opening height and is available with a 270-degree swing-out rear door for easy access to the cargo compartment.

For a variety of trades and businesses, Ford Transit vans can be customized with storage and shelving systems such as cargo dividers, multi-racks, bulkheads and sliding platforms, as well as an internal ladder-rack system. Transit vehicles can be custom-configured at www.TransitUpfits.com and upfitting options include 11 available ship-through facilities, eight of which are located within 20 miles of the Kansas City Assembly Plant.

Backed by the more than seven million Transit commercial vans that have been produced and sold around the world since the vehicle was introduced in 1965, Ford is anticipating that its new models for North American fleets will become highly popular in short order. Fleets interested in the Ford Transit can build a virtual model at the Ford website.

Advertisement
In this article:Ford, Transit van