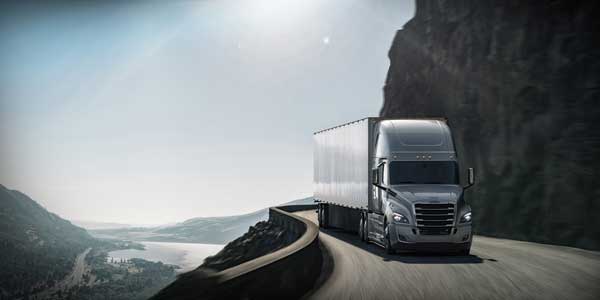 Roger Nielsen leans against the railing on a balcony looking over Daimler Trucks North America (DTNA)’s High Desert Proving Grounds in Madras, Ore. He chats up anyone who happens to be standing beside him, as if he is picking up the ends of a long interrupted conversation with an old friend. Below, a battalion of Freightliner trucks braves the proving ground’s punishing test tracks.

Twenty-six hundred miles away, Freightliner New Cascadias roll off the production line in Freightliner’s Cleveland, N.C., manufacturing plant and onto the highways, marking the next evolution in Freightliner’s Class 8 offering. But Roger, who was appointed president and chief executive officer of DTNA in April, knows that this is only the beginning.

“The market acceptance of the New Cascadia has been great,” he says. The wide-eyed enthusiasm that saturated his voice while watching the trucks below sharpens as he details the New Cascadia launch strategy.

“With the original Cascadia, it took us four years to reach 25,000 in volume, and now we’ll do it in the first 11 months,” he says. “The idea was to launch the day cab and the 72-in. raised roof with Detroit power, and that was a great success. The next launch group was the Cummins engine and Eaton UltraShift Plus transmission option, and then we’ll get into different roof styles and cab options into 2018. After that, we will bring additional fuel efficiency options to the marketplace in 2019.”

With the promise of more efficiency to come before the majority of ordered New Cascadias are on the road, it’s clear that there’s work to do. Especially since the New Cascadia—equipped with AeroX and Integrated Detroit Powertrain that includes a GHG17 Detroit DD15 engine, DT12 with Intelligent Powertrain Management (IPM4) and 2.16 direct drive axle ratio—already boasts up to an 8% fuel economy increase over a similarly spec’d 2016 Cascadia Evolution, according to the OEM.

To watch a test drive of the new Daimler proving grounds and hear more insight from Roger, click here to watch our video.

Shifting gears, Roger quickly points out that safety is also front and center within a fleet’s focus.

“If fleets look at their real cost of ownership of a vehicle, they see that it’s not just fuel and labor costs, but it’s also issues related to safety, be it accidents or driver injuries,” he says.

His tone grows more serious as if the future safety of all trucks hinges on his next thought.

“How can you make the vehicle safer, and how can you make the driver safer?” He lets the questions hang in the crisp High Desert air. “That is not only a fleet question. That’s a question for everybody. Customers, both large and small, are asking the same thing: ‘What can Freightliner do to help me prevent accidents between the truck and another vehicle, and how can you help me prevent my driver from being injured on the job?’”

A big part of the answer is the High Desert Proving Grounds, which will play a key role in the continued development trucking innovations. Excitement slips back into Roger’s voice as he sweeps his hand across the vast 84 acres of highly engineered test track surfaces framed by the snow-capped Madras mountains.

“Here, we have brought in the best test conditions that we could simulate from around the world,” he says. One test track mile is equal to 200 real-world miles in terms of durability testing, allowing Daimler Trucks to accelerate truck testing to the tune of 6,000 test track miles equaling 1.2 million application miles.

“We’re hoping to bring out durability and reliability issues that a customer experiences in the latter part of the vehicle’s life, so that we can get it corrected and design changes made,” he adds. “The more you can do in testing, the less you have to do after testing.”

Only the beginning: As Freightliner’s New Cascadia rolls out, innovation rolls on