At the Daimler Trucks International Commercial Vehicle Show (IAA) 2018 Produce Experience, the OEM made several big announcements that advance its integration of technology, connectivity and equipment. Check out the rundown of announcements and the FE take on why they matter to the North American market and videos showing off the new equipment and technology.

The next step in automated driver-assist systems

Daimler Trucks unveiled its new Mercedes-Benz Actros. The most important innovation, according to the OEM, is Active Drive Assist 5, with which Mercedes-Benz Trucks puts partially automated driving into series production. The new Active Drive Assist 5 can brake, accelerate and steer independently. Unlike systems that only work at certain speeds, Active Drive Assist offers the driver partially automated driving in all speed ranges for the first time in a series-produced truck. New elements are the active latitudinal control and the combination of longitudinal and lateral control in all speed ranges through the fusion of radar and camera information.

Active Drive Assist builds upon the adaptive cruise control with stop-and-go function and the lane-keeping assistant from Mercedes-Benz. While responsibility for monitoring the traffic situation remains with the driver, the system provides significant support and makes an important contribution to increased road safety.

The FE Take: As Daimler Trucks has shown time and time and time again, it’s definitely important to pay attention to announcements across all of its brands as you can be sure what shows up in one product will likely transition to others in its global product line. Need proof? Check out the image of the new Mercedes-Benz Actros driver environment below, then check out the video showing off the interior of the Freightliner eCascadia unveiled earlier this summer.

When it comes to the new Mercedes-Benz Actros, I’ve taken the liberty of bolding the most important part of the press release above. These technologies might have arrived in the Actros first, but it’s a strong bet that is just where it starts. According to Daimler Trucks North America’s Kary Schaefer, general manager of marketing and strategy, there is a rollout strategy across the Daimler Trucks brands. Stay tuned.

Bonus take: Eagle-eyed readers might have noticed the new Mercedes-Benz Actros camera mirror system as similar to the ones that made an appearance on both the Freightliner SuperTruck and Freightliner Inspiration Truck.

This week, Mercedes-Benz Trucks is starting practical trials for its all-electric heavy-duty eActros truck. The retail and logistics service provider Hermes is the first of 20 customers in different sectors who will integrate the electric truck into their fleets. Each customer will use a near-series 18 or 25-tonner in their normal operations for one year to test it for day-to-day suitability. The aim is to realise locally emission-free and quiet operation of heavy-duty trucks in cities. The test series is divided into two phases with ten customers each, and covers a period of around two years. 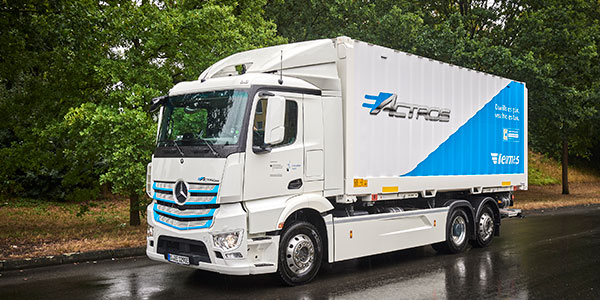 The FE Take: It’s important to keep an eye on Daimler Trucks’ global use and development of its electric truck technology because as Roger Nielsen, Daimler Trucks North America (DTNA) president and chief executive officer, stated in our exclusive interview from Fleet Equipment’s July Issue:

“Going forward, you’ll see further architecture commonalities. We’re doing this on our medium-duty trucks, Western Star trucks, Freightliner Custom Chassis. Soon, instead of having two- or three-year delays between when you see new innovations in Europe and when you see them here in North America, you’ll see innovations coming simultaneously. Seamless integration. Boom! Off we go.”

The bold emphasis is mine. Click here to read that cover story.