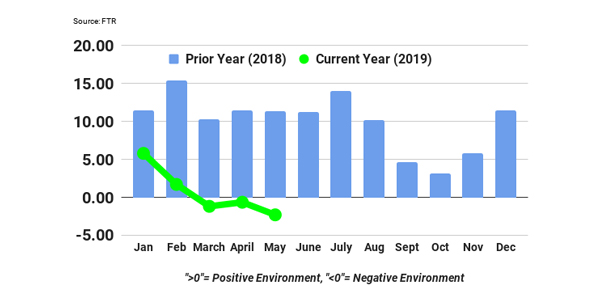 FTR’s Trucking Conditions Index fell back nearly two points in May to a new reading of -2.3.

FTR’s Trucking Conditions Index fell back nearly two points in May to a new reading of -2.3.

The TCI has been in negative territory since March and reflects a general weakness in conditions affecting carriers. The outlook is for relative stability through the year with the possibility of some slightly positive readings month-to-month during the period, FTR says.

The May TCI reading was primarily brought down by the softening rate environment. Freight demand was the only positive contributor in the May measure, albeit not a particularly strong one.

“Although we have dropped from double-digit TCI readings to negative readings in less than a year, we believe the outlook for the rest of 2019 generally is for stability close to neutral conditions,” said Avery Vise, FTR’s vice president of trucking. “It’s also important to recognize that most of the weakness is in the industrial sector, so trucking activity related to consumer demand should be relatively stronger than the rest of the industry.”

Upkeep and maintenance of steering gears
Connect with us