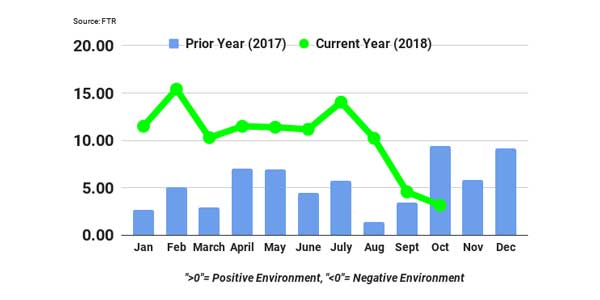 FTR’s Trucking Conditions Index for October fell to a reading of 3.17, more than a point lower than September, which had seen a significant dip from August, when the TCI measure was in plus double digits. Stabilizing truckload rates and a short-lived run up in diesel prices were largely responsible for a continued deterioration in trucking conditions during October. In spite of the fact that the October reading was the lowest since August 2017, FTR says that the outlook for trucking conditions looks stronger in the near term with the TCI rebounding to a better level for months to come.

“October’s conditions index confirms the general sense that the current cycle has peaked,” said Avery Vise, FTR’s vice president of trucking. “Although we anticipate improved conditions for the remainder of 2018 and much of 2019 compared to October, we appear to be headed gradually toward neutral territory.”

How to spot macro and micro trends in truck data