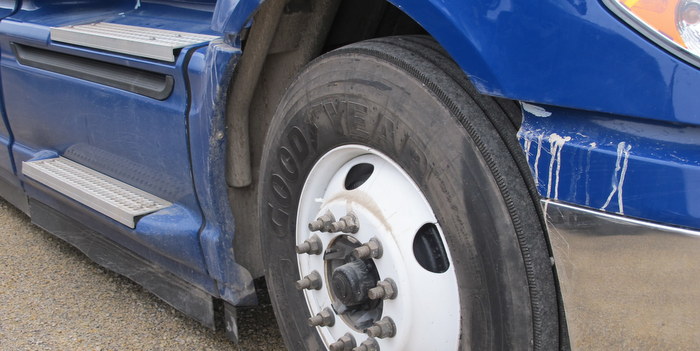 Goodyear also offers a SmartWay-approved precure retread product in the Fuel Max line, matching the Fuel Max G505D with 21/32nd skid depth. The Fuel Max G505D PreCure boasts a rolling resistance coefficient 5% lower than its predecessor, the G305 AT PC, according to Goodyear.

At Goodyear’s Tire Technology Day in San Angelo, representatives from the company said that he Fuel Max line will add a fuel-efficient trailer tire in Q4 2015 and additional retread precure products.

All of Goodyear’s Fuel Max tires are available for OE and replacement markets.

Goodyear’s focus when developing the Fuel Max line was one thing: Saving fuel.

Tires contribute about 33% to long-haul truck’s fuel economy, said Goodyear’s Commercial Brand Marketing Manager Brian Buckham. Using American Transportation Research Institute data, Buckham said that there was a 16:1 ratio between fuel and tire expenses. He also said that 1% of fuel economy saved could equal up to $778 per year per truck.

“We know that fuel is a long haul fleet’s number-one expense,” said Buckham. “If you’re a fleet, the quickest way to reduce your operating cost is to reduce your fuel consumption. That’s exactly what our Goodyear Fuel Max LHD G505D/Fuel Max LHS combination is designed to do, while at the same time delivering other benefits that are important to long haul fleets.”

During the event, Goodyear demonstrated Fuel Max products’ fuel efficiency and other features throughout several tests, including a SAE Fuel Type II test demonstration, a straight-line wet stopping with ABS demonstration and a coast-down demonstration.

Each demonstration was conducted on Goodyear’s San Angelo proving grounds – the largest of the company’s six proving grounds across the world. In fact, all five other proving grounds fit inside the 7,520-acre testing facility in Texas. At this facility, Goodyear tests passenger, light truck, commercial truck and off-the-road tires.

For the SAE Fuel Type II test demonstration, Goodyear fitted a 2014 Navistar ProStar with its Fuel Max drive and steer tires and loaded the trailer with concrete to 80,000 lbs. gross weight. The truck took off from Goodyear’s San Angelo proving grounds and headed 60 miles Northeast on public highways to Abilene, Texas, and then came back. Data loggers recorded time, shifting and cruise speed (which was capped at 65 MPH). According to Goodyear’s Buckham, this demonstration is similar to an official SAE Fuel Type II test.

Goodyear’s straight-line wet stopping with ABS demonstration showcased the Fuel Max drive and steer tire combo’s responsiveness, specifically in wet and icy conditions. The testing team used a wet, polished-concrete surface to replicate the conditions of ice on a concrete road. Driving at a speed of 25 MPH, the truck driver was instructed to hard-brake at a cone to measure the braking responsiveness of the tires. (see video below)

In the coast-down demonstration, Goodyear showed the tire combo’s rolling resistance, allowing a truck to get up to a speed of 52 MPH, then coast-down in neutral until the vehicle came to a complete stop. The farther the vehicle rolled, the less rolling resistance in the tire, or energy (fuel) required to go forward. In the demonstration, Goodyear’s Fuel Max tires coasted farther than its competition. 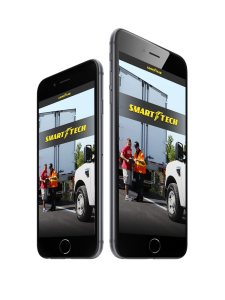 Goodyear showcased its new roadside service app at the event, which is designed to provide fleets with better information transfer between the truck driver and service provider, more accurate data and improved roll-time.

The Goodyear Smart Tech app is available for both iPhones and Androids and features buttons that technicians push to keep all parties informed of their location, activities and progress from the moment the call is accepted to the moment the technician returns home after having helped the customer’s truck return to service.

“All necessary information – including the service call’s roll-time – is electronically and automatically sent to the customer,” said Jose Martinez, business solutions manager, Goodyear Commercial Tire Systems. “There is no need for writing, memorization or phone calls, which saves valuable time and helps eliminate expensive errors.”

The app was rolled out to Goodyear Commercial Tire & Service Centers, Goodyear-aligned dealers and Goodyear-affiliated dealers throughout the U.S. during the tiremaker’s 2015 Annual Meeting. According to Goodyear, fleets will benefit from the app, which gives both parties full transparency in the service call and expedites the repair process.