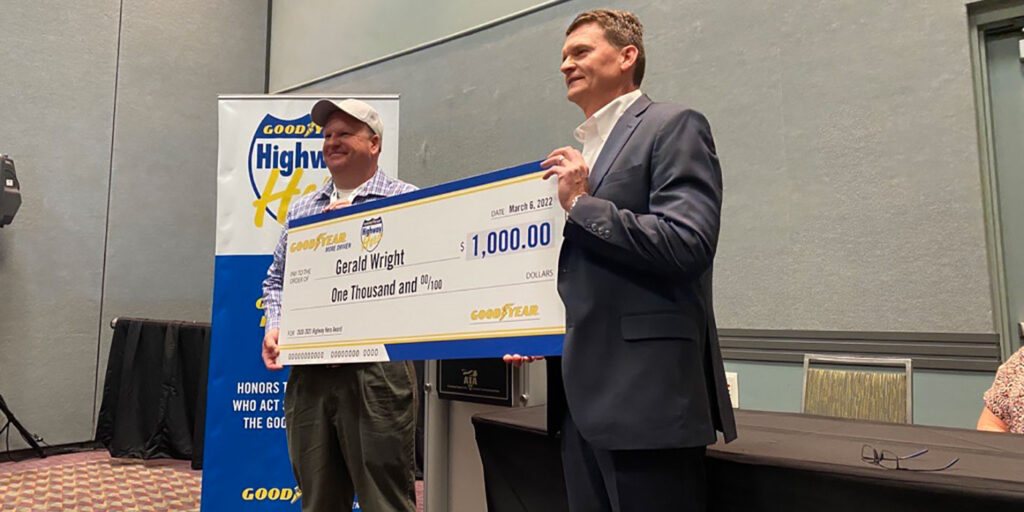 The Goodyear Tire & Rubber Co. announced the winner of its 2020-2021 Highway Hero Award, a program that–since 1983–celebrates professional truck drivers who act selflessly for the good of others on the highways across North America. Gerald “Andy” Wright of Jacksonville, Illinois, a truck driver who saved the lives of motorists trapped in a burning vehicle, accepted the 37th Goodyear Highway Hero Award during a news conference today at the 2022 Technology and Maintenance Council in Orlando, Fla.

“From the moment I saw the flames, all I could think about was what I could do to help those inside the car get to safety,” said Wright. “I’m honored to be given this award from Goodyear, and at the end of the day I feel very
fortunate to have been in the right place at the right time to help those in need.”

Wright received a significant monetary reward and other custom prizes from Goodyear, joining a prestigious family of past program winners that span generations.

In October 2021, Goodyear commissioned a call for submissions, asking the trucking community to nominate a driver in their life who demonstrated an extraordinary act of courage on the road. After receiving dozens of inspiring
story submissions, a panel of independent industry judges voted on the grand prize winner, and identified two deserving finalists with incredible stories:

• Gerald “Andy” Wright, Highway Hero Award Recipient: While driving on Illinois Route 3, Wright encountered a vehicle that was on fire following an accident. Equipped with nothing more than a fire extinguisher and load bar, Wright sprung to action and quickly suppressed the fire as best he could until the extinguisher ran out. Wright then proceeded to break the vehicle’s sunroof and helped pull the trapped occupants out of the vehicle to safety. By the time all riders had been removed, the car was fully engulfed in fire.

• Jami Meyers, Program Finalist: Meyers was driving on an interstate when she noticed a car in front of her swerved lanes and hit a barrier. Meyers quickly exited her truck to investigate when she noticed the vehicle was slowly moving, and the car’s driver was on the ground in front of the car. Meyers immediately entered the vehicle and put the car in reverse to ensure the man could be safely removed from the car’s path. Meyers then placed a coat on the man to keep him warm and stayed with him until emergency personnel arrived.

• Phillip Hurte, Program Finalist: Hurte was driving through Lubbock, Texas, when he witnessed an SUV roll over. Acting quickly, Hurte immediately pressed on his brakes and pulled over to see if he could help the situation. When Hurte approached the damaged vehicle, he noticed two adults and a young child inside. Hurte proceeded to help
each family member exit safely and waited with them as first responders rushed to the scene.

As program finalists, Meyers and Hurte will also receive monetary prizes from Goodyear.

Click here to learn more about the Highway Hero awards.