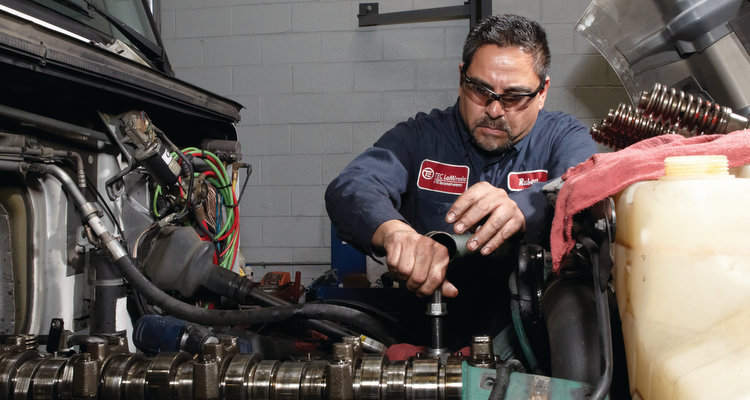 Change is coming to the heavy-duty industry in a big way. In February, the Proposed Category 11 (PC-11) engine oils were approved and two new diesel engine oils were born: API CK-4 and API FA-4. This December, those two oils will replace the traditional CJ-4 oils and bring along a host of benefits. There is one outstanding question that has yet to be answered by engine OEMs: Are the new FA-4 oils backward compatible with engines older than model year 2017?

“The FA-4 introduces a high temperature, high shear viscosity of 2.9-3.2cP compared with the previous standard of the CJ-4 and now the CK-4, which is 3.5. The lower the viscosity of the oil, the less drag there is on the oil and that gives us an opportunity for improvement in fuel economy,” explained Tim Proctor, technical leader of heavy-duty engineering for Cummins Inc. “The one thing that’s important to note is for large fleets is that it’s going to be a period of transition as this new oil becomes available. [Adoption] is dependent on product capability and some manufacturers are going to initially shy away from trying to measure both oil rates in different trucks. And it’s also going to depend on how OEMs decide to factory fill their trucks.”

For the Cummins 2017 X15 engine offering, FA-4 oils will provide an added fuel economy benefit; however, the standard recommendation will be CK-4, due in part to the engine’s 2017 emissions certification. “We didn’t want to lean on the small fuel economy benefit you get from FA-4 and include that in our greenhouse gas certification,” Proctor explained. “We deliberately certified with the CK-4, and that means there’s no issue with the greenhouse gas certification if an OEM decides it’s going to do a first fill with CK-4 or if a fleet wants to run that as standard. We’re completely compatible with 10W-30 oils in the FA-4 and CK-4 standards, and we continue to work on the 5W oils in both categories.”

The goal of the FA-4 category was to pull even more efficiency out of 2017 and newer engines. While the backward compatibility question was answered by the CK-4 category, which is suitable for all engines, the new question is: What happens if you use a CK-4 oil in a newer engine?

“The trade-off is going to be that you’re still going to protect the engine with a CK-4 oil because CK-4 oils are going to be fully compatible for both new and older engines. However, you’ll be sacrificing an extra one-half to 1% of fuel economy benefit,” said Paul Basar, regional business manager, heavy-duty diesel—Americas for Lubrizol Corp., a company that supplies oil performance additive and polymer other formulations to heavy-duty engine oil marketers. “The question is, how do you balance the logistics issue of getting the right oil in the right engine with the economic issue of saving the fuel? That’s the balance that fleets will have to deal with by talking with their suppliers.”

Engine protection is another concern when talking about thinner oils. And it’s true: Not all oils are created equally. Dan Arcy, Shell’s global OEM technical manager for the Americas, gave an example of an issue pre-2017 model year engines may experience when running an FA-4 oil and expanded on the protection capabilities of the new category.

“Some of the things that could be experienced are lower oil pressure because you have a lower viscosity oil, specifically when the vehicle is at idle. Some of the engines were not designed to run on the FA-4 oils,” he said. “However, I think the take away here is that Shell has done extensive testing [of FA-4 oils] and that was all done in older engines—2011-2013 model year engines—and done across all brands of engines. In all of them, we saw solid wear performance and protection. We’re confident that we wouldn’t see any wear issues [using Shell Rotella FA-4 oils].”

For fleet managers, the bottom line is that you’re going to have to do your homework. Parse through the articles from FE’s Oil & Lube Advocate supplement, listed below and then talk with your OEM and oil supplier to find the right fit for your fleet:

Are they compatible? Diving into the new engine oil categories