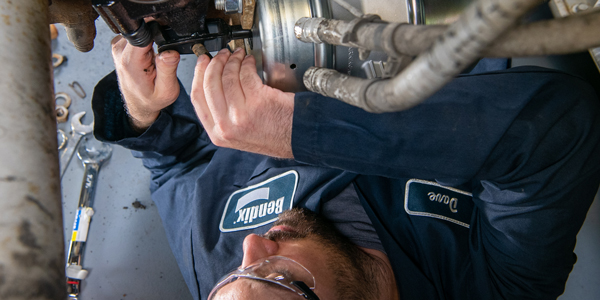 Fleets and drivers can prevent key air system and brake components from failing due to improper maintenance practices, helping to keep vehicles on the road and in good operating condition.

Parts fail: It happens occasionally in even the most maintenance-conscious fleets and drivers. Often, though, the service and support teams at Bendix encounter reported failures or problems – those unwanted “gotchas” that lead to unplanned downtime – that perhaps could have been prevented by adhering to prescribed maintenance guidelines and best practices.

This installment of the Bendix Tech Tips series focuses on how fleets and drivers can prevent key air system and brake components – air dryers, compressors, automatic slack adjusters, and air disc brakes – from failing due to improper maintenance practices, helping to keep vehicles on the road and in good operating condition.

Moisture in a vehicle’s compressed air system isn’t good: It can lead to corrosion and reduce the effectiveness of lubricants. Mix it with oil aerosols, and water can contaminate valves and deteriorate seals, impacting everything from brake performance to automated manual transmissions. A properly functioning air dryer is absolutely crucial – and dryers are a regular point of discussion on the so-called warranty pile.

“When someone can’t get water out of their air system’s service tanks, the assumption tends to be that there’s something wrong with the dryer,” said Richard Nagel, Bendix director of marketing and customer solutions, charging. “A lot of the time, though, we find that other factors have come into play and that the dryer itself isn’t the culprit. There are physics to an air dryer that you can’t get around, and if the science rules aren’t followed, you’ll have a dryer that doesn’t remove enough moisture.”

For instance, Nagel noted, dryer location and routing of the discharge air line from the compressor to the air dryer matter greatly but aren’t always properly considered. A dryer mounted under the hood, for example, may be in an environment that doesn’t allow for the required temperature differential between its hot side and cold side. Additionally, the discharge line may not be sufficiently cooled.

Water in the service tanks might also be a result of a mismatch between the output of the air compressor and the capacity of the air dryer, especially in systems equipped with larger compressors to meet high air demand.

If there’s too much air demand, the dryer’s charge-and-purge cycle may not provide enough desiccant regeneration since the compressor is running constantly and the dryer is not purging enough moisture to keep the desiccant from saturating. In cases like this, a vehicle might require an extended purge dryer or a continuous flow dryer, or even two dryers in tandem.

If the system is experiencing difficulty building air pressure, Nagel also suggests looking small before thinking big: “Just look for leaks,” he said. “Some of our dryers have multi-circuit connections with multiple fittings and hoses connected; sometimes you’ll find small cracks in air hoses; and sometimes you’ll find discharge lines clogged with carbon. None of these issues requires replacing a compressor or dryer.”

Out at the wheel-ends, automatic slack adjusters (ASA) represent another not-uncommon component found in the warranty pile.

“We see plenty of slack adjusters come back for a warrantied replacement, but when we take them apart, it’s immediately apparent that they haven’t been recently or properly greased,” said Keith McComsey, Bendix Spicer Foundation Brake director of marketing and customer solutions, wheel-end. “When you neglect this simple bit of preventive maintenance, the grease inside a slack becomes very clay-like as the lubricity breaks down and contaminants build up, which prevents it from functioning as it should.”

Greasing an ASA serves two vital purposes: Forcing the new lubricant in purges the old grease, along with any water or contaminants that have found their way in; and it protects the adjuster’s internal gear sets, clutches, and other components from wear. Both are necessary to maintain correct brake stroke and provide optimal stopping performance, and all it takes is injecting new grease through the grease fitting. You will see old grease exiting the purge hole in the rubber boot; continue until you start to see new grease exiting. That is the signal that you have successfully replaced the old grease with new grease. It should take less than a minute per adjuster and can easily be handled during preventive maintenance inspections.

The right upkeep also matters greatly to the life and performance of air disc brakes (ADB), where something as simple as selecting the wrong aftermarket replacement pad kit can have severe consequences. Choosing an overly aggressive friction can lead to stress cracks or heat cracks in the rotor, for starters – but there are also important details in kit accessories that are often overlooked.

“Bendix benchmark testing of other aftermarket pad kits in the market demonstrated a 40% reduction in pad retainer spring force (on average). A kit that comes with a weaker pad retainer spring can damage the retainer bar and/or the carrier because the pad will have more movement during brake applications and vibration,” McComsey explained. “In the long term, this can lead to a damaged carrier, and potentially even break the retainer bar, which could lead to other extensive damage beyond the brake.”

He continued, “When it comes to shear adaptors (a pad kit component used to back brakes off/set running clearance), other aftermarket pad kit benchmark testing has shown non-Bendix shear adaptors shearing at 1.5-times higher torque value (on average) than Bendix’s. Adaptors that shear at higher torques run the risk of damaging your adjuster (the caliper internal mechanism); once that happens, you’re forced to replace the entire caliper. Using the wrong pad kit will void your caliper warranty since other aftermarket kit pads do not perform the same, nor do they use OEM hardware like Bendix does to protect the rest of the system.”

McComsey also stressed the importance of regular preventive maintenance and inspection practices, including checking and measuring ADB friction for thickness, checking for caliper slide-ability and making sure caliper boots and chamber seals are intact to prevent contaminants from getting inside.

Advertisement
In this article:Bendix, Timely Tips