Do you know what coolant is required in your engines? 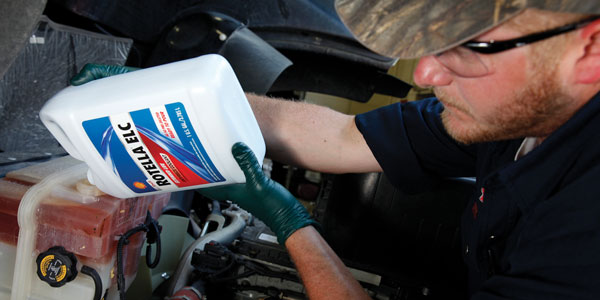 Cooling systems can be a major culprit in causing catastrophic engine failures. Ensuring that your engines are running at optimum temperature to be as efficient as possible starts with filling with the proper coolant. Today, most fleets are running some sort of extended life coolant (ELC), but the chemistry of ELCs can vary wildly. That plus the plethora of acronyms—IAT, HOAT, OAT, NOAT—and the fact that not all manufacturers follow the coolant color guidelines established by TMC, and there’s plenty of room for coolant confusion. So come along as we clarify your coolant options.

“The combustions inside of the cylinders cause the walls to vibrate, resulting in small vapor bubbles that then collapse on cylinder walls picking away at the metal,” added Dan Holdmeyer, Chevron’s North America industrial sector manager. “The nitrites coat the cylinder walls and reduce this detrimental cavitation effect.”

“When OATs were introduced,” Cook continued, “even though OAT lab studies showed they protected wet sleeve liners, OEMs were reluctant to give up having nitrites.”

Let’s drop the acronyms for a minute for a quick point of clarification: Extended life coolants employ organic acid technology, which most coolant manufacturers, including those interviewed for this story, agree provides the proper cylinder protection alone. Just as you want to make sure you protect your brand new army of tractors by purchasing insurance, OEMs requested that coolant manufacturers add nitrite into OAT-infused extended life coolants; they did so, hence nitrited organic acid technology (NOAT) coolants.

“Nitrite is an excellent corrosion inhibitor,” agreed Colin Dilley, vice president of technology for the Prestone Products Group. “To replace the performance of nitrite, other inhibitors need to be formulated into the coolant. To ensure cylinder liner protection, nitrite-free OAT coolants must minimally be shown to pass the ASTM D7583 Coolant Cavitation Test.”

More than 20 years after the introduction of ELCs with NOAT, engine manufacturers have a growing confidence in stand-alone OAT, and coolant suppliers are one step ahead of them, having decades of on-road experience with OAT coolant and already exceeding cavitation test benchmarks.

“The vast majority of equipment coming off the production lines today—I’m talking upward of 90% in the Americas—is using extended life coolant as factory fill,” said Angelo Macchia, Recochem’s product manager for coolants. “In regard to the aftermarket, we are seeing year-over-year diminishing reliance on conventional coolant [IAT], but I would say that is generally at 20% demand or less.”

What about other coolant additives? 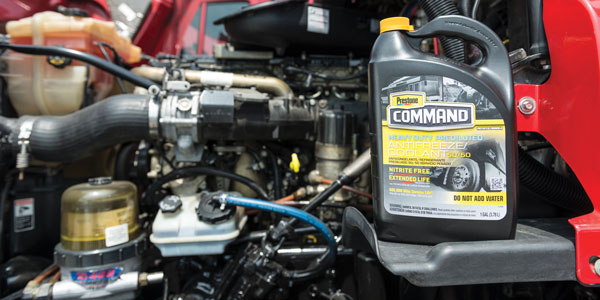 Inorganic additive technology (IAT) is conventional coolant that may utilize borates, nitrates, silicates, phosphates and other inorganic salts to form a protective barrier at the metal surface; but IAT impedes heat transfer and depletes over time, according to Shell’s Granger.

“[IAT coolants] either need to be replenished with additive treatment or a system change out,” Chevron’s Holdmeyer added.

It also should be noted that nitrite is still critical to providing proper protection in IAT conventional coolant.

“Nitrite is a vital component in older conventional fully formulated antifreeze and is used to prevent liner pitting, which occurs when vapor bubbles form in the coolant by the vibration of the liner and implode against the liner, releasing a high-pressure jet of water which causes cavitation, erosion and corrosion of the liner surface,” Granger said. “Left unchecked, cavitation can eventually cause a breach in the liner wall, allowing coolant to seep into the crankcase.”

The need for more maintenance has caused the industry to turn away from IAT coolants in favor of OAT and NOAT ELCs.

“ELC or OAT coolant additives form a mild to strong electromagnetic bond with the metal surface,” Granger explained. “ELC or OAT additives may detach and re-attach, and consequently are not depleted, leading to the longer life for the coolant.”

Let’s not forget about hybrid organic acid technology (HOAT), which is not compatible with OAT or NOAT.

Got it. So what do I use in my engines?

It depends on the make and model of the engine. However, according to Recochem’s Macchia, there are a few considerations to weigh when switching to an extended life OAT coolant in an engine currently using an IAT. The first piece of advice is to follow the recommendations of the engine and/or vehicle manufacturer as to what coolant technology you should be using. Also consider that not all engine OEMs are comfortable with nitrite-free OAT coolants.

“Nitrites are still out there because some OEMs still want a nitrited coolant; other OEMs are factory filling with nitrite-free products,” Macchia said, explaining that the change is tied to fuel economy and emissions regulations that are forcing OEMs to change their engine designs. “Engines have to be lighter, so they’re using more aluminum in the design—it’s a lighter alloy compared to cast-iron. As that becomes more prevalent in heavy-duty engines, you want to move away from nitrited coolants.”

(More on that in a minute.)

After you’ve confirmed which coolant you should be using or you are able to switch to, you need to then select a high-quality coolant to ensure you are receiving a trustworthy solution. There are a couple of rules of thumb to remember when selecting and using coolants.

In short, once you select your coolant, know that coolant inside and out. Maintaining proper additive concentration levels can ensure that your extended life coolants maintain their warranty up to 600,000 or beyond, depending on manufacturer. Fleets should typically perform coolant system tests every 90 to 120 days, though following your manufacturer’s recommendation supersedes that guideline.

For tips for switching from IAT to OAT, read our article here. 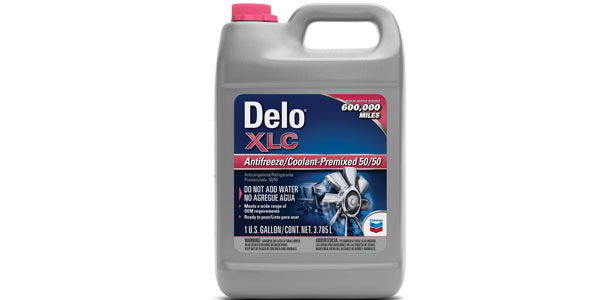 “New materials being used, multiple systems in one engine compartment, and a lot more heat being transferred through the coolant system has put more demands on materials compatibilities and demand on quality coolants,” Chevron’s Holdmeyer said, noting that today’s OAT coolants stand up to the challenges—but you have to make sure that you’re on top of your fleet’s needs. If you’re running five-year-old trucks with IAT coolant and you refresh your lineup, the new engines will likely require OAT or NOAT coolants. Now you’re carrying two coolants and trying to keep two PM checks straight or you have to change over your older coolant systems.

“It is creating confusion,” Prestone’s Dilley agreed. “As manufacturers change their recommended coolant types, maintenance professionals and operators are unaware of the coolant type now required for specific makes, models and years of vehicles. This is causing mixing and misuse of coolant technologies that is leading to problems. Before coolant is used, more upfront work needs to be done to ensure the right coolant is always being added. Just pouring by color or by past manufacturer use is no longer appropriate to keep vehicles free of coolant system issues.”

The consequences of using the wrong coolant in an engine are real, especially as engine OEMs extensively use aluminum in their designs, which would strictly require the use of nitrite-free coolant. Consider the complications that aluminum radiators have brought to the market. Old World Industries’ Cook explains:

“To reduce weight, the heavy-duty industry moved from copper brass radiators to aluminum radiators. To increase the strength and robustness of the radiators, a brazing process was employed and a brazing compound was used to facilitate clean aluminum-to-aluminum contact. This very clean aluminum surface would be attacked by the nitrite when the coolant was added, which oxidized the aluminum and reduced the nitrite to ammonia, which caused the pH to increase. Often, precipitate would form which blocked radiator passages. This did not automatically happen in every brazed radiator, but it happened enough to be a problem. If this occurred, the cooling system could be flushed and refilled, and the problem would not return.”

Clearly, understanding the coolant demands of any new (or new-to-you) engines you add to your fleet is imperative. You’ll also need to communicate those engines’ needs to your maintenance team to ensure that they are topping off with the correct coolant. Taking the time upfront could save you from a migraine-causing, wallet-thumping service call.