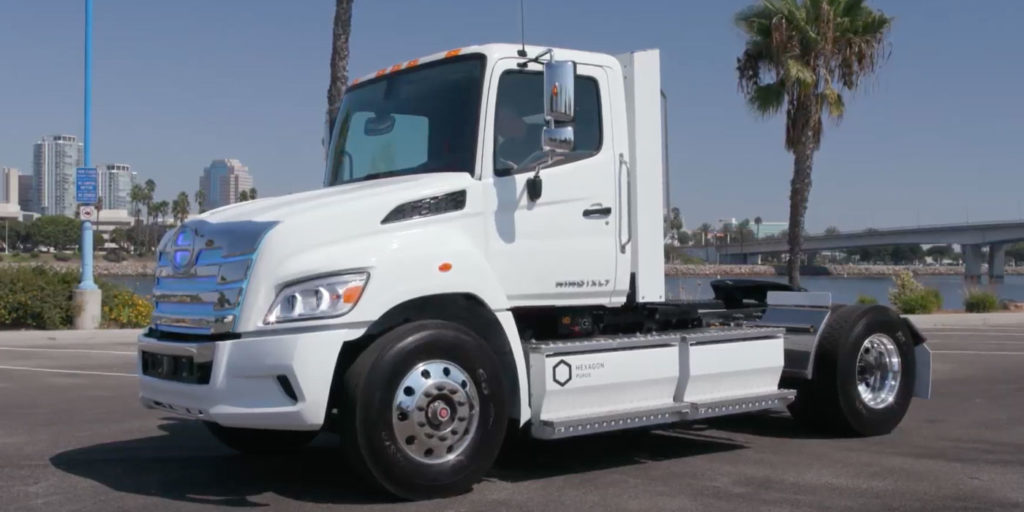 Hino Trucks has announced “Project Z,” outlining its plans to develop and release several zero-emissions vehicles over the next few years. The project includes both battery electric and fuel cell electric trucks.

“We’ll have some early prototypes in 2021, we’ll have customer demos in 2022, and we’ll be in full production before 2024,” said Glenn Ellis, senior vice president of customer experience with Hino Trucks.

Those vehicles include a Class 5 SEA Electric SEA-Drive 120a on a Hino M5 chassis (pictured above); a battery electric Class 7 Hino tractor with Hexagon Purus’ full electric drive system (shown at the top of the page); and a Hino XL Series Class 8 box truck powered by Xos Trucks’ X-Pack battery and electric drive system (pictured below). All three vehicles were showcased in Hino’s Project Z launch announcement video, which can be viewed here.

Additionally, Hino announced that it will be working with its parent company, Toyota Motor North America, to jointly develop a Class 8 fuel cell electric truck for the North American market.

The companies say they will leverage the Hino XL Series chassis with Toyota’s fuel cell technology, expanding upon the existing effort to develop a 25-ton fuel cell electric truck for the Japanese market which was announced earlier this year.

Takehito Yokoo, senior executive engineer – advanced fuel cell at Toyota Motor North America, noted that Toyota has many years of experience in developing fuel cell-powered vehicles, adding that “we are very confident and comfortable to say that it is scalable up to Class 8.”

Yokoo said that Hino will build the first truck in the first half of 2021.