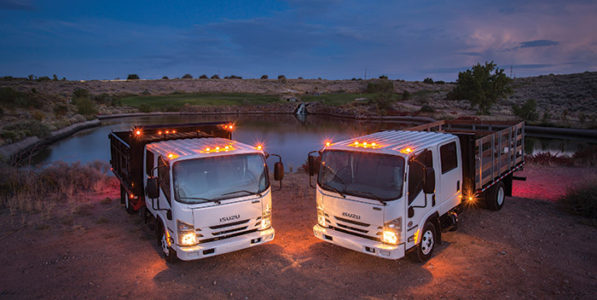 At this year’s NTEA Work Truck Show, Isuzu Commercial Truck of America pulled the curtain back on the latest evolution of its F-Series Class 6 medium-duty truck. The new 2018 Isuzu FTR, notably, is the first truck in the Class 6 segment to offer a 5.2-liter turbocharged four-cylinder diesel engine. It’s a move that Isuzu believes will blaze a trail in the growing trend of smaller engines that provide efficiency in a world governed by tighter emissions regulations.

“Customers have different application needs, but all customers want a truck that does what they need it to and has minimum downtime. They also want a truck that is cost-effective—not only in its initial acquisition price, but operationally. So, if the FTR can make it happen while using less fuel, then the customer wins,” Shaun Skinner, president of Isuzu Commercial Truck of America Inc., told Fleet Equipment. Skinner was quick to draw a parallel to the car industry, where larger eight- or six-cylinder engines were commonplace.

“Today, that is a very different story,” he said. “As technology allows us to increase the performance of an engine—both horsepower and torque—I believe we will see many more examples of smaller displacement engines being used. It just makes sense.

“Most customers don’t tilt the cab to look at the engine and see if it is four or six-cylinders—they need it to perform whatever functions are required for their jobs,” he continued. “We believe our engine will be able to provide the necessary performance for a large percentage of the Class 6 market.”

Isuzu is keeping engine specs under wraps until we get closer to its production ramp-up in the middle of next year, but Skinner expects the truck to perform well in the segment, with volume projections setting an 12-month pace of 1,500 to 2,000 units and growing from there.

In terms of application, inner-city pickup and delivery will be the primary focus initially.

“As we see more and more commerce through the Internet, we feel the need for ‘final-mile’ delivery will increase,” Skinner explained, pointing to the 2018 FTR’s cab-forward design to help it navigate congested city environments. “The requirements for trucks making those deliveries won’t be going down in size—our belief is it will go up in size in many instances.”

Just as important as meeting application demand is meeting driver demand in today’s industry, as the driver shortage impacts fleets both large and small. “A larger truck built to function well densely populated areas will allow drivers to be more effective and make their job easier when dealing with the difficulties of a lot of traffic and tight spaces.”

From Isuzu’s view, cab-forward trucks have found a nice niche in the North American market thanks to their tighter turning radius and a smaller footprints even when equipped with a larger body versus conventional cabs.

“In 2014 and 2015 our sales grew at a faster pace than the overall market did,” Skinner said, who has his sights set squarely on the road ahead. “The 2018 FTR will appeal to customers who are looking for great maneuverability, a smaller footprint with a larger body than conventional trucks can provide and the lowest cost of ownership.”