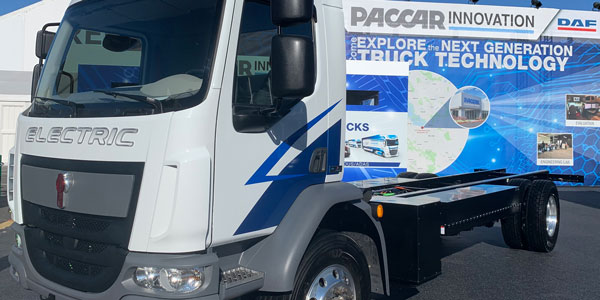 The companies made an announcement in conjunction at this year’s CES in Las Vegas.

The announcement was made in conjunction at CES in Las Vegas.

Kenworth displayed a Kenworth K270E battery electric vehicle – the initial result of that collaboration ­– in the PACCAR booth during CES.

The zero-emissions Kenworth K270E cabover is equipped with Dana-designed e-Powertrain system that is fully integrated and upfitted to the Kenworth chassis. Configured as a direct drive system, the vehicle utilizes a Spicer Electrified e-propulsion system, and a standard Dana drive axle and driveshaft. Dana also supplies an e-power system, which generates, stores and manages the energy for the vehicle and consists of electrified auxiliary systems, an on-board charger and two battery packs. Dana-developed software and controls enable the diagnostics and telemetry of the complete system.

The electric powertrain will be available with a range of options between 100 and 200 miles. The company says the high-energy density battery packs can be recharged in about an hour using the vehicle’s DC fast-charging system.

The proof-of-concept truck was conceived and constructed at the PACCAR Innovation Center. This Kenworth T680 is equipped with cameras, LiDAR (light detection and ranging) sensors and radars to sense the surrounding road environment and to feed fusion algorithms in the perception stack for object identification and tracking.

A global navigation satellite system with an inertial measurement unit combined with LiDAR point cloud on a high-definition map provides centimeter accuracy localization, Kenworth says. The autonomous vehicle software and feedback control logic for actuation are hosted on five computers that record up to 1TB of data per hour of driving.

Proterra to supply battery technology for up to 10,000 Lightning eMotors EVs
Connect with us