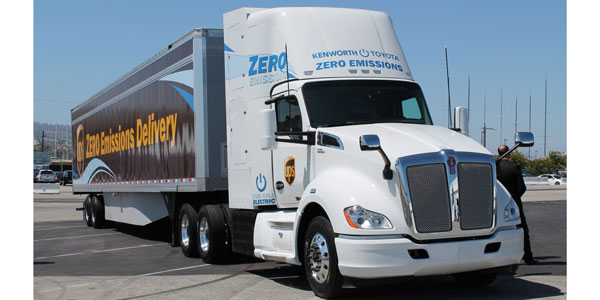 At a recent event at the Port of Los Angeles, Kenworth Truck Co. and Toyota Motor North America showcased a production model of the companies’ hydrogen fuel cell-powered truck.

The truck is one of 10 zero-emissions vehicles being developed by the two companies. It is built on a Kenworth T680 frame and is powered by Toyota’s hydrogen fuel cell electric powertrain.

The 10 trucks were announced by the two companies in January, as part of a $41 million Zero and Near-Zero Emissions Freight Facilities (ZANZEFF) grant awarded by the California Air Resources Board (CARB), with the Port of Los Angeles as the prime applicant. CARB has awarded those funds to the Port of Los Angeles for the ZANZEFF project as part of California Climate Investments, a California initiative dedicated to reducing greenhouse gas emissions, strengthening the economy and improving public health and the environment—particularly in disadvantaged communities.

Click here to watch our video of the truck in action.

“These trucks aren’t science experiments,” said Bob Carter, Toyota’s executive vice president for automotive operations. “During testing, these trucks logged 14,000 miles in real-world range hauling cargo up and down the LA basin, just like any other Class 8 truck.”

“The performance of the 10 Kenworth heavy-duty trucks being developed under this program is targeted to meet or exceed that of a diesel, while producing water as the only emissions byproduct,” said Mike Dozier, Kenworth general manager and PACCAR vice president.

The 10 trucks will be given to the following companies: Four trucks will be operated by Toyota Logistics Services, three by UPS, two by Total Transportation Services Inc., and one by Southern Counties Express. The fleets will run the hydrogen-powered trucks in real-world operations, which will provide critical data for future development of the zero emissions powertrain.

“It’s an honor for UPS to be collaborating with Toyota, Shell and Kenworth on such a trail-blazing project,” said Carlton Rose, president of global fleet maintenance and engineering for UPS. “As a company always looking for the next innovative technology to better serve our customers, UPS was very pleased to be selected as a demonstrating partner for the hydrogen fuel cell electric semi project.”

In addition, two new large capacity heavy-duty hydrogen fueling stations will be developed by Shell in Wilmington and Ontario, California. The two new stations will join three additional stations located at Toyota’s Long Beach Logistics Services and Gardena R&D facilities to form an integrated, five-station heavy-duty hydrogen fueling network for the Los Angeles basin. Together, these stations will provide multiple sources of hydrogen throughout the region, including over 1 ton of 100% renewable hydrogen per day at the Toyota Logistics Services station to be operated by Shell, and important research and development advances at a pair of stations operated by Air Liquide, all enabling zero-emissions freight transport.