Based in Grand Rapids, Mich., Meijer operates 203 supercenters and grocery stores throughout Michigan, Ohio, Indiana, Illinois and Kentucky. The company’s stores are served by a fleet of 170 tractors and more than 2,100 dry freight and refrigerated trailers, including 2010 through 2014 model year Freightliner Cascadia power units and trailers from Vanguard, Utility, Wabash and Great Dane. 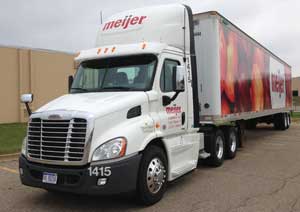 Advertisement
Click Here to Read More
Advertisement
“Evaluating new systems and components for suppliers allows us to make informed decisions about where we see our fleet years down the road,” says David Hoover, director of outbound logistics at Michigan-based retailer Meijer. “Working with manufacturers, we can establish early on whether new technologies will lower our overall operating costs from fuel savings or reduced maintenance and improve safety.”
Based in Grand Rapids, Mich., Meijer operates 203 supercenters and grocery stores throughout Michigan, Ohio, Indiana, Illinois and Kentucky. The company’s stores are served by a fleet of 170 tractors and more than 2,100 dry freight and refrigerated trailers, including 2010 through 2014 model year Freightliner Cascadia power units and trailers from Vanguard, Utility, Wabash and Great Dane.
“We look at a range of factors when we’re making purchasing and specification decisions,” Hoover states. “Beyond price, we evaluate total cost of ownership. We consider fuel efficiency and environmental impact, potential productivity improvements from new products, component durability, safety of drivers and the public and current and future regulations that will impact our operation. Additionally, we use input from our drivers and technicians about previous specs and what they think of new offerings.”
Manufacturer and dealer support are also important to Meijer, Hoover notes. “If you wait for new technology to arrive and haven’t prepared prior to its arrival, then be prepared for impending disaster,” he says. “Get your technicians trained to service equipment before it arrives by making sure your dealership is ahead of the game and is scheduling factory training for your staff and their own mechanics. Internally, put laptops and software capable of diagnosing equipment in place and get your IT department involved early on as it can take months to prepare a network.”
Ongoing involvement 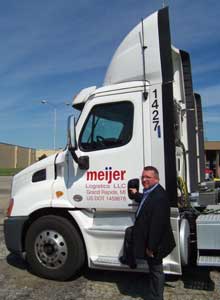 Meijer’s current fleet and its specifications are partly the result of the company’s ongoing involvement with manufacturers, and in some cases, its willingness to evaluate new technologies before they are on the market. Prior to buying its first Freightliner Cascadia tractors in 2010, Meijer worked with the OEM to test the new model. Likewise, it was able to evaluate pre-production Evolution versions of the tractor in 2013 and Evolution models for 2014.  Currently, the company is operating 2016 model year prototypes and is planning to test a CNG-powered version of the Cascadia in the future.
The adoption of clean diesel technology at Meijer was also preceded by several evaluations. “It was challenging and exciting to be one of the first fleets in North America to operate both 2010 and 2014 clean diesel trucks,” Hoover states, “but we’re now benefitting from a substantial increase in fuel economy.
“Our fleet is also playing a big role in helping Meijer meet its strong environmental commitment,” Hoover adds. “Today, our tractors produce about the same emissions as just four tractors would have a few years ago. We are proud that we have one of the cleanest and most fuel efficient fleets in the country.”
Other ongoing evaluations at Meijer aimed at enhancing fuel economy and safety include those for automated transmissions from Eaton and Detroit, and for pre-production tires made up of different rubber and tread compounds from Michelin. Based on past testing, a large portion of the tractors and trailers in the fleet are now equipped with air disc brakes.
Advertisement

Currently undergoing testing at Meijer is the SAF-Holland Auto-PosiLift automatic axle lift system. Designed for varying load operations, the Auto-PosiLift reads air spring pressure and determines whether to automatically raise the trailer’s front axle when it senses that only one axle is necessary to carry the load.
“We don’t have consistent payloads,” Hoover explains. “In our business, when a trailer returns from the store it has pallets and other light items on it. We run some loads in Michigan—carrying milk, for example —that leave our facility at 90,000 lbs. and return at 5,000 lbs. Other loads can vary from 19,000 to 80,000 lbs.; so it doesn’t make much sense to have all the axles on the ground if you can lift them, still meet axle weight limits, save wear and tear, and improve fuel economy.”
Eliminating issues
Meijer, Hoover points, is a preferred test fleet for suppliers in part because its tractors return to a company facility every day. “The process is a two-way street,” he advises. “Don’t be afraid to call a manufacturer when you’re not getting results and don’t live with a problem when you find it. Get the engineers in to eliminate the issue on existing and future models.
“Manufacturer and dealership support is critical to addressing issues,” Hoover continues. “We benefit from those relationships because they can apply what they learn from evaluating our equipment and make changes based on our actual use of a product. There is definitely long term value for us in having manufacturers make specification recommendations and fine tune test technologies to match our duty cycle.”
Meeting needs is what Meijer is all about, Hoover adds. The family-owned retailer opened its first store in 1934 when Hendrik Meijer, a barber in Greenville, Mich., purchased merchandise on credit and opened Meijer’s Grocery to serve customers who visited his shop.
Recognized as a pioneer of the “one-stop shopping” concept, Meijer stores have evolved through the years to include expanded produce, meat, apparel and electronics departments, as well as pharmacies and garden centers. Fulfilling needs has been a hallmark of Meijer for almost 80 years, a practice and a philosophy that extends to the company’s fleet operation in many ways.
Advertisement
In this article:Fleet Profile & Specs

Meijer and its suppliers are benefiting from evaluating new vehicles, systems and components