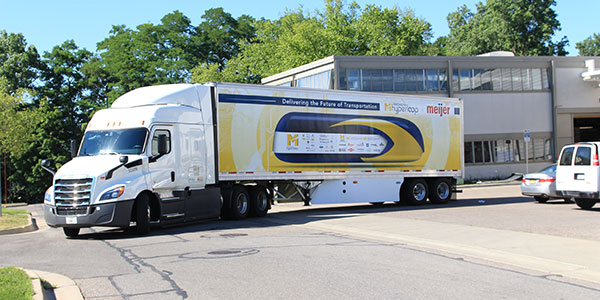 Anyone who’s ever driven in a large city during rush hour has visions of faster forms of transportation. So, when a team of engineering students from the University of Michigan qualified to compete at an exclusive international competition at Elon Musk’s SpaceX campus in Hawthorne, Calif., Meijer offered its trucking expertise to help transport their futuristic transportation pod across the country.

The retailer’s fleet team completed a 2,300-mile trek in a specially-wrapped refrigerated Meijer truck, delivering U of M’s 400-lb. “Hyperloop Pod” that will compete against 18 university teams from around the world at the third SpaceX Hyperloop Pod Competition on Sunday, July 22. The competition challenges engineering students to design and build the best transport pod, which could one day be used in super-high-speed transit systems.

“As a Michigan-based retailer dedicated to innovation and community, we’re thrilled to help some of our home state’s brightest students,” said Dave Hoover, Meijer Director of Outbound Logistics. “They’ve worked incredibly hard and have committed themselves to a project that could impact the future of transit and cargo transport.” 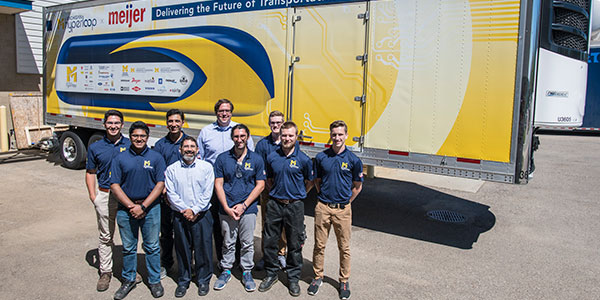 Part of the U of M Hyperloop Team with faculty advisor Michael Umbriak (Front Row) and Meijer Logistics Manager Chris Schomberg (Back Row) in front of the specially-wrapped refigerated Meijer truck that will transport the 400-pound “Hyperloop Pod” to Hawthorne, Calif for SpceX’s third Hyperloop Pod Competition.

While its trucks are usually busy delivering fresh produce, groceries and merchandise to more than 240 stores around the Midwest seven days a week, Hoover said the Meijer Fleet regularly donates its transportation services and vehicles to local organizations and festivals across the Midwest. Most recently, the Meijer Fleet team donated two reconditioned semi-trucks and trailers to Northern Michigan University’s new CDL Truck Driving Program. Since 2010, Meijer has donated 93 tractors and 33 trailers to community partners across the Midwest.

“We’re incredibly grateful for the transport expertise and support that Meijer provided,” said Matthew Theis, the U of M Hyperloop Team’s technical director. “It’s been an incredible journey so far. We hope our design achieves our goal of exceeding 300 mph and lands our self-propelled pod a world record for speed.”

The 55-student U of M team dedicated thousands of hours into the project since September 2017, researching and executing a design that included continual testing and verification for the components and systems that make up the pod. This is the first year the U of M Hyperloop Team qualified for the trip to SpaceX, beating more than 200 teams to compete in the final stage and test their prototype on a mile-long vacuum track.

How to spot macro and micro trends in truck data