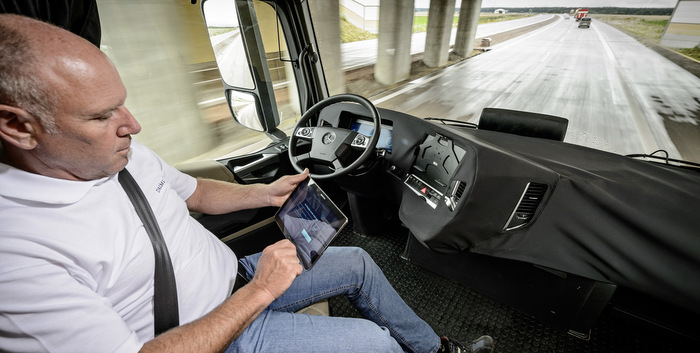 Recently, Mercedes-Benz Future Truck 2025 prototype was debuted in Germany. It is an autonomous semi that drives itself—but is not a “driver-less” vehicle. The demonstration truck had a number of proprietary technologies, some of which are available today that will change the way vehicles are driven in the future. According to Dr. Wolfgang Bernhard, member of the board of management of Daimler AG, responsible for Daimler trucks & buses, “Networking of technology is the next big thing.” He cited the company’s current telematics systems, including Detroit Connect that is available today, as the base of future advancements like those demonstrated in the Mercedes-Benz future Truck 2025.

The truck showed off the company’s “Highway Pilot” technology, which drives the semi leaving the driver free to attend to other matters during the journey—he or she only intervenes when required. At start-up, the driver switches the system on and takes his or her hands off the wheel at which point the display confirms the activation of the system with a “Highway Pilot active” notification. Then it’s business as usual. The semitrailer combination uses the truck’s intelligent sensors and computing power to steer the vehicle and, if needed, make slight corrections by itself.

If the driver wants to relax in comfort, he or she presses a button on the armrest and the seat immediately moves backwards, it may be turned to the right by 45º for a comfortable seating position. The driver is able to stretch out in comfort, as if sitting in an armchair at home while the Highway Pilot does the driving.

The sophisticated technology on the demonstration truck is a combination of radar sensors at the front and sides, a stereo camera behind the windshield, precise three- dimensional maps and V2V/V2I (vehicle-to-vehicle and vehicle-to-infrastructure) communication the exchange of information between the truck and other vehicles, and on the highway. Instead of a conventional instrument cluster it has a high-resolution, graphic color display. When the “Highway Pilot” is activated, the information in the display is reduced to a minimum and all the data appears on the screen of the tablet computer in the center console. The developers no longer refer to the interface between the driver and truck as “instruments,” but as the Human Machine Interface or Human Machine Interaction, or HMI for short. This is the centerpiece of the Mercedes-Benz Future Truck 2025, which the company stated is still in development.

The traffic of tomorrow will have its share of unforeseen incidents and breakdowns, but according to the company the Future Truck 2025 will smoothly adapt to the conditions. The company stressed that this technology is not meant to eliminate drivers, who are still needed to respond to truck system prompts during driving, keep logs, etc.

Advertisement
In this article:Autonomous, Daimler Trucks