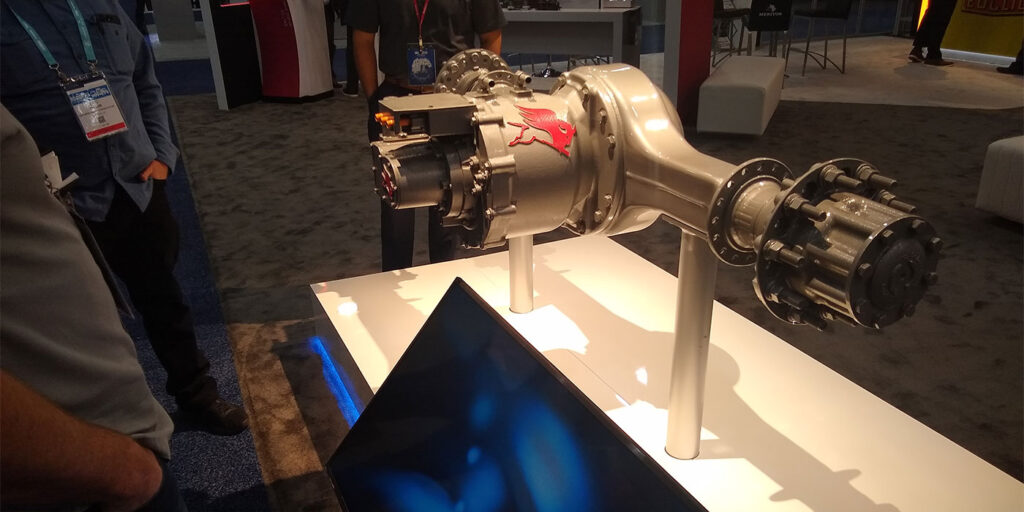 During Heavy Duty Aftermarket Week, Meritor’s aftermarket and product leadership sat down to provide an update of its aftermarket initiatives and the evolution of existing aftermarket products. Here’s the rundown.

Electrification in the aftermarket

Meritor is barreling ahead toward electrification. It recently announced series production of its 14Xe ePowertrain. When asked what opportunities the ePowertrain holds from the aftermarket, Doug Dole, general manager, product strategy, Meritor, said it’s too early to point to specifics but there will definitely be opportunities.

“We have shipped our production axle. We have service manuals. We have catalogs. We’ve done the work so that when it gets out in the market, they’re going to be able to identify parts,” he said. “With regenerative braking and other features–it’s going to be impactful to the aftermarket.”

Meritor has noted that its e-axle housing, carrier, axle shaft and wheel ends share commonalities with its well-known diesel counterpart.

A new wrinkle in the ePowertrain world is batteries, and the lithium-ion batteries powering electric trucks are a different world from the typical truck battery that might come to mind. But that might be an even bigger question mark as suppliers and OEMs sort out their supply strategies and then even further down the line–how the battery works into the late- and even secondary life of an electric truck.

“It’s not yet determined how much [battery supplying] we’re going to end up doing for the OEM,” Dole noted. “We are very interested in the axle and the inverter because we have the technology in the inverter to provide power to that axle and the algorithms and all the things that do that. That’s where we’re focusing our efforts. If we have to integrate the axle [with the battery power supply], we will. We’re doing that for some of the OEMs, but I think the OEMs will probably want to do some of that themselves.”

On OEM lines, Meritor has a 70% axle market share and a 65% market share of the driveline. Dole noted that Meritor is going to focus on improving its take of the aftermarket segments.

“We’ve done well on the Meritor first-fit products, especially when it comes to brakes, but on the drive axle side, we didn’t have a great all-makes program. Now, we’ve used our engineering prowess and expertise to develop a really, really good aftermarket gear for those applications, and that’s where we’re seeing good traction,” Dole said.

The evolution of aftermarket e-commerce

Since its launch in 2016, the MeritorPartsXpress.com e-commerce platform has seen enhancements year over year. Christy Westrich, director of customer loyalty, Meritor, noted that the aftermarket is quickly catching up to meet customer demands and other expectations they bring to an e-commerce experience.

“Now, we’re evolving to a point where we’re understanding that we can connect to our own customers through their eCommerce sites,” Westrich explained. “Our thought is: Why not help support them so they don’t have to reinvent the wheel?”

Integrating e-commerce platforms and digital catalogs necessitates a degree of transparency that the aftermarket has long pushed against. But transparency was a theme that continued to surface throughout the show, and Westrich addressed it head on.

“I think we’re, as an industry, we started out really protective of everything,” she said. “We wanted to keep all our data to ourselves; all of our technical information. There are just some pirates out there just scraping websites and at some point, you just realize everybody’s going to have access to the data anyway. So instead we’re saying, ‘Let’s do this together.’”