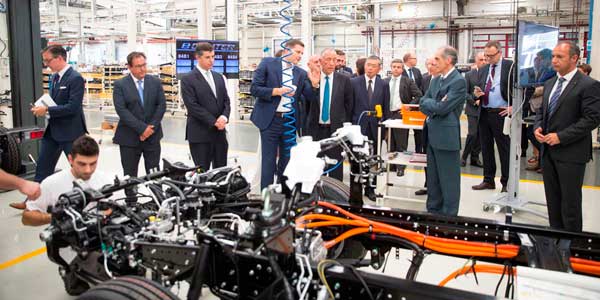 Mitsubishi Fuso Truck and Bus Corp. has announced the start of production of its all‑electric Class 4 truck, the Fuso eCanter. The first eCanter trucks will be delivered to customer in the coming months, the company said.

The eCanter is a Class 4 truck with a 15,995 lb. GVWR and a payload capacity of roughly 9,380 lb. It has a practical range up to 100 miles, one-hour quick charge capability, and standard eight-hour overnight charge. The truck also offers flexible battery configurations, so users can choose between maximizing the eCanter’s range to its full capacity of 100 miles, or working with a somewhat smaller range in order to maximize its payload, the company noted.

Watch our test drive of the Mitsubishi Fuso eCanter at this year’s Work Truck Show.

Marc Llistosella, president and chief executive officer of Mitsubishi Fuso Truck and Bus Corp. and head of Daimler Trucks Asia, spoke at an event at the company’s Tramagal plant in Portugal announcing the start of production. “With today’s start of production of the eCanter, we become the first global manufacturer to produce an all-electric truck in series,” he said. “From now on, we can address the growing demand for locally emission-free delivery trucks in mega-cities. We have already received the first customer orders and will mark the global launch of this truck in New York, one of the world’s most iconic mega-cities, this September. Our Portuguese plant not only produces the trucks for Europe and the U.S., but has also benefitted from a close cooperation with the authorities in Portugal and Lisbon, having tested the trucks there since 2014.”