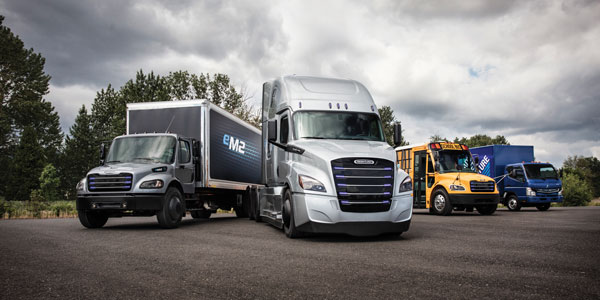 Roger Nielsen steps out of the Thomas Built all-electric Saf-T-Liner C2 school bus and stands in front of more than one hundred analysts and media representatives to make the biggest product announcement since he took the position of Daimler Trucks North America (DTNA) president and CEO. He shakes Martin Daum’s hand as Martin hands him the presentation controller, a fitting passing of the torch from the Member of the Board of Management with responsibility for the Daimler Trucks and Daimler Buses who tapped Roger for his current position 14 months ago.

The crowd in the enormous tent erected at the Portland International Raceway falls silent. DTNA has brought everyone here for its Capital Market and Technology Day, an event touting its latest innovations focused on automation, connectivity and electrification. After a morning of witnessing the Detroit Assurance 4.0 suite of safety systems and platooning demos and peppering the Detroit Connect team with remote diagnostic questions, there was one more innovation check box to mark; one last question left to answer.

When the Freightliner eCascadia rolls into the tent to raucous applause from the DTNA team that turned their all-electric Class 8 dream into a reality, it’s more a confirmation of hints, rumors and even a logo that Daimler Trucks teased at last fall’s North American Commercial Vehicle show in Atlanta than a surprise. But it was nonetheless impressive. At the start of production, the eCascadia provides up to 730 peak HP. The batteries hum with 550 kw/h of usable power, capable of a 250-mile range and the ability to charge up to 80% (providing a range of 200 miles) in 90 minutes.

But Roger’s presentation didn’t stop there. There was more to come. 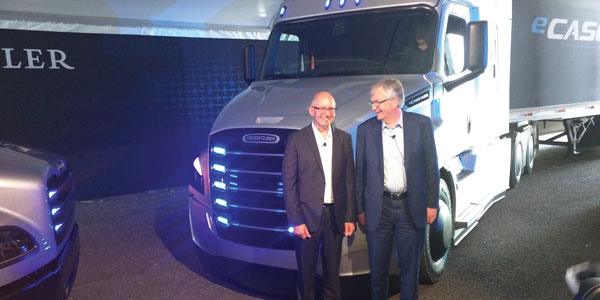 As he spoke a teaser image of a Freightliner medium-duty truck grill appeared on the screens. Suddenly, DTNA’s vision of a full lineup of electrified trucks is so clear it’s as if it were hiding in plain sight all along. The Freightliner eM2 106 all-electric medium-duty truck outfitted with a van body rolls into the tent; the only noise the truck makes comes from the hissing brake lines and squealing tires as the truck turns to face the audience and stops to take a bow.

The eM2 will initially sport 480 peak HP with batteries that provide 325 kw/h of usable capacity and a range of up to 230 miles. In the way of charging, the batteries have the ability to charge up to 80% (providing a range of 184 miles) in about 60 minutes.

Roger rests his hand on the eM2’s passenger-side wheel fender and soaks in the applause.

“The eM2 was the big surprise today,” he says through a wide smile as we sit at a conference table in his office at DTNA’s Portland, Ore., headquarters for an exclusive interview hours after his presentation. It was a surprise that has been in the works since 2005 when all segments of Daimler agreed to a common electronic architecture based on the development work being done on the Mercedes S Class. “Going forward, you’ll see further architecture commonalities. We’re doing this on our medium-duty trucks, Western Star trucks, Freightliner Custom Chassis. Soon, instead of having two- or three-year delays between when you see new innovations in Europe and when you see them here in North America, you’ll see innovations coming simultaneously. Seamless integration. Boom! Off we go.”

One proprietary global electric powertrain. Let that sink in for a moment. That’s Daimler Trucks’ goal as the OEM continues to develop electric vehicles. Yet, that’s not to say that Daimler Trucks is snubbing its suppliers—just the opposite.

“We have not locked ourselves into any architecture, yet, for the axles, motors, cooling system, converters, battery supplier, and so on—nothing is a lock,” Roger explains. “Even today, right after the presentation, I got text messages saying, ‘Can you please put my axles on two of your eCascadias?’

“‘Proprietary’ just means that the systems are coming across Daimler. It doesn’t mean that we build it all ourselves,” he continues. “Don’t mix up that up. If we find a supplier that has the best solution, you’ll definitely see us apply it worldwide. Our global Electric Mobility Group [EMG] is responsible for bringing it all together into one solution. So we say to our suppliers, ‘Hey, we’re interested in talking.’”

For fleets, OEMs and suppliers alike, it’s easy to get caught up in the electric vehicle hype. Non-traditional trucking companies (so-called ‘disruptors’) have entered the market, bringing mainstream media buzz and big product unveilings that make even bigger promises. Yet, when the Class 8 electric truck buzz was crackling to life last fall, DTNA was uncharacteristically quiet after launching the first electric truck with the Class 4 Fuso eCanter earlier that spring.

“When our customers hear other messages,” Roger says, “they circle back to us and say, ‘Okay, now: what’s the truth?’ Our customers have known what we were doing. We’ve had many workshops with them to uncover the right electric truck use-cases. There has definitely been a lot of talk out there in the industry. Our silent period was on purpose because we didn’t want to take away from today. We knew that this day would come.”

The focus on its customers will continue as DTNA develops its electric truck lineup. The OEM announced plants to roll out 30 test vehicles (dubbed the Freightliner Electric Innovation Fleet) to customers later this year to put the eCascadia and eM2 through real-world paces.

On the flip side, however, there are the electric vehicle detractors. The voices that say the industry has been down this road before. While natural gas, propane, gasoline and now electricity power a multitude of medium-duty trucks in a variety of applications, no other fuel source has been able to out-pace diesel in Class 8 applications. Yet, from his perch atop DTNA, Roger sees how today’s battery technology has reached the point where the business case is “getting close to viable for certain applications.

Roger notes that, regardless of the technology, customer questions don’t typically change. Fleets want the most efficient and reliable truck they can get at the lightest weight possible. Today, we talk about electric trucks in terms of diesel equivalent, but Roger promises that we’ll be talking about miles per kilowatt hour soon enough. Speaking of efficiency benchmarks, during his presentation, Roger states that the all-electric trucks will, at the very least, match diesel efficiency performance when they go into production in 2021, if everything goes according to plan. But Roger doesn’t underestimate the number of unknown variables facing electric trucks.

“Right now, we’re in the gaining knowledge mode,” Roger says when asked about how long it may be before electric truck efficiency surpasses diesel. “Those are the kind of things we have to discover. Certainly there will be some inventions and creativity along the way. For sure, we need the costs of batteries to come down, and the power density of batteries needs to go up to improve the use- and business-cases for battery driven vehicles.”

As Roger talks about the electric truck hurdles Daimler Trucks has already cleared and the challenges that face him on the road ahead, his voice slips between tones of deadly seriousness and outright giddiness. For Roger, the truck technology innovations Daimler Trucks has cooking, be it in the arena of electrification, automation or connectivity, are one part work, another part adventure; all with one certainty: the learning will never stop.

“I’ve learned a lot,” Roger says as he reflects on the past 14 months in his role as DTNA president and chief executive officer. “I have a broader view of what our customers’ business models really are and that has opened my eyes and helped me make better decisions here—be it concerning people, or products, or processes. I’ve gone to school. My customers have taken me to school on what it takes to run their business. It’s not all about new trucks.

More than a truck: Daimler unveils its electric strategy