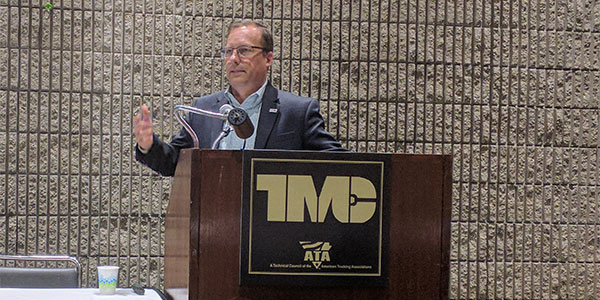 The North American Council for Freight Efficiency is now accepting applications for fleets to participate in Run on Less Regional, a fuel efficiency road show focusing on trucks that operate 300 miles from base. The Run will kick off on Oct. 8 from various points across the U.S. and Canada and will conclude with a finale on Sunday, October 27 at the NACV show.

“In Run on Less 2017 we were able to demonstrate the fleets operating in real world conditions could achieve 10.1 MPG on a consistent basis, but long haul is only one part of the truck market and we want to see just how fuel efficient fleets in regional haul can be given the challenges they face,” said Mike Roeth, Executive Director at NACFE.

For Run on Less Regional, NACFE is looking for a different equipment makeup.

“We think we’ll have sleepers and daycabs, but trucks must run less than 300 miles from their home base,” Roeth said. “We might also see a truck that goes out for a week, but it stays in a region. Maybe it starts in Columbus, Ohio, then goes to Toledo, Cincinnati … but all in that close-to-home range.”

According to Roeth, it will be tracking real freight, real routes, real drivers, and all the equipment on the trucks will be commercially available.

“Electric trucks – if you know the route the truck is taking every day, it’s easier to put in the infrastructure,” he said. “So we’re going to be tracking some emerging technologies.”

Fleets interested in participating should go to runonlesss.com to fill out an application. Manufacturers are also encouraged to encourage fleets to apply that they think exemplify high MPG in regional haul applications.

Advertisement
In this article:Run on Less, TMC 2019