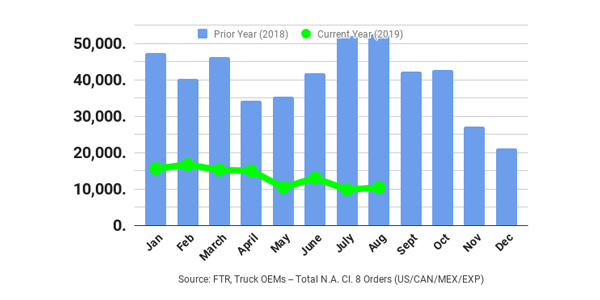 According to FTR, Class 8 orders have fallen into a narrow range since May, averaging 11,000 units a month during that period. OEMs have built through much of the backlog created by the record orders in 2018. Fleets are in no hurry to start ordering for 2020, as there are expected to be ample build slots available and no component part shortages. It is expected that the market will return to normal, seasonal order cycles, with large fleets placing their 2020 requirement orders in Q4. Class 8 orders for the past 12 months have totaled 298,000 units.

Don Ake, FTR vice president of commercial vehicles commented, “The Class 8 market is at a turning point. The huge orders in 2018 supported the robust production last year and through much of 2019. Now the economy has slowed and there are enough trucks to handle the available freight growth. OEMs are cutting production rates, eventually down to near replacement demand levels.

“There is a tremendous amount of uncertainty in the economy right now due to tariffs and the trade war with China. Businesses are holding back on capital investment and our industry is no exception,” Ake continued. “Fleets are going to be cautious about buying new equipment in the short term. We do expect orders to increase in October. However, if freight growth is still muted and manufacturing sluggish, the big fleets may just place orders for Q1 and take a wait and see approach.”

Regarding the medium-duty market, ACT’s Vieth explained, “If the weakness in the Class 8 market is a reflection of broad softness in freight-intensive economic sectors, the modest downturn in Classes 5-7 order activity is more reflective of the still-healthy consumer economy in much of North America. Though, after a seven-year positive run and some inventory building, the MD is looking increasingly tired. In August, NA Classes 5-7 net orders were 18,800 units, up 10% from July, but down 22% y/y.”

Complete industry data for August, including final order numbers, will be published by ACT Research in mid-September. In addition, final data for August will be available from FTR later in the month as part of its North American Commercial Truck & Trailer Outlook service.

North American Class 8 orders for August up modestly from July