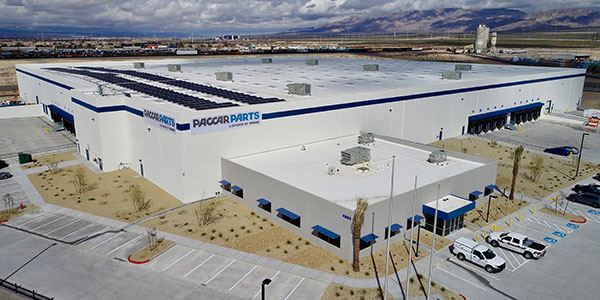 PACCAR Parts announced the opening of a new 250,000-sq-ft parts distribution center (PDC) in Las Vegas. The facility, which includes a 20,000 sq-ft small parts mezzanine, became operational in May and has increased parts availability and uptime to dealers and customers. This PDC serves 95 Kenworth, Peterbilt and TRP locations in the Southwest United States and Northwest Mexico.

The new distribution center has three times the capacity of the facility it replaces and is the latest addition to the PACCAR Parts global distribution network, which includes 18 PDCs with more than 3.1 million square feet of warehouse space. PACCAR Parts utilizes advanced technologies and innovation to increase operational efficiency, including stock-picking equipment with built-in weigh scales, voice-directed picking technology and an automated banding conveyance system to boost order fulfillment.

A large training center will allow the PDC to host educational and informational meetings with dealers, fleet customers, suppliers and PACCAR employees.

The reality of predictive truck maintenance
Connect with us