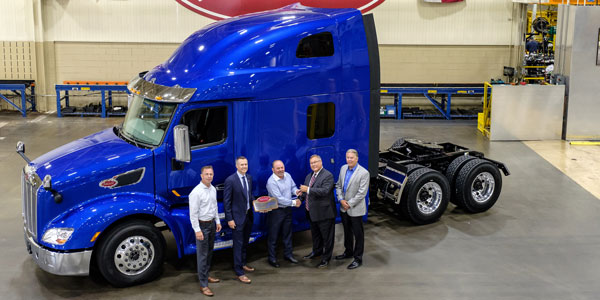 Peterbilt announced the introduction of the Model 579 UltraLoft earlier this year.

“The Model 579 UltraLoft was designed to exceed customer demands, offering increased space and storage to create a comfortable environment for drivers,” said Robert Woodall, assistant general manager of sales and marketing with Peterbilt. “The UltraLoft is the result of the collaborative process between Peterbilt and many of our customers and drivers.”

Driver experience was the key driver in designing the Model 579 UltraLoft, according to the OEM. By optimizing the space available, the new sleeper model includes ample storage and comfort. The UltraLoft also gives drivers a large upper and lower bunk mattresses, plenty of headroom in both bunks and creature comforts with space to accommodate a large microwave and enough room to fit a 32-in. flat screen TV.

In the way of operational performance, Peterbilt stated that the UltraLoft provides an estimated 2% aerodynamic improvement and a 220 lb. weight reduction to push the limits of efficiency even further while maintaining the styling and bold look of the Model 579.