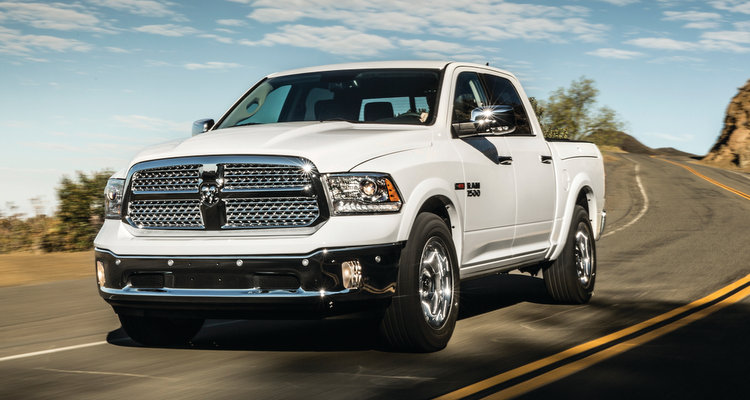 Central to the design and development of 2014 model year Ram Truck pickups and chassis cabs is an emphasis on boosting fuel efficiency. The 2014 Ram 1500, for example, was designed with the manufacturer’s TorqueFlite 8, an eight-speed automatic that doubles the amount of gears compared to the previously available four-speed transmission, and stop-start, thermal management, pulse-width modulation and active aerodynamics systems, including grille shutters.

For 2014, the Ram 1500 half-ton truck will be available with 3.6-liter Pentastar V-6 and 5.7-liter HEMI V-8 gasoline engines, and a new 3.0-liter V-6 EcoDiesel. The turbocharged 60-degree, dual overhead camshaft (DOHC) 24-valve V-6 that produces 240 HP and 420 lb./ft. of torque has achieved 50-state emissions compliance for both Tier II and BIN 5 standards. A key enabler, the OEM notes, is the engine’s cooled Exhaust Gas Recirculation (EGR) system, which is controlled by electric instead of conventional pneumatic valves.

Pulse-width modulation (PWM) for the Ram 1500, according to Ram, reduces parasitic electrical load to save fuel. Fuel delivery and the forward cooling fan are two systems that take advantage of PWM, the company notes, generating a 0.4% improvement in fuel efficiency.

Also designed to cut load on electrical systems and save fuel is a variable displacement compressor (VDC) that automatically varies its pumping capacity to meet air conditioning demands rather than an on/off fixed displacement compressor. As a result, the VDC lessens loads on the engine, reducing parasitic losses to enhance fuel efficiency. Like the VDC, a pulse-width modulation (PWM) blower on the Ram 1500 continually controls fan speeds for optimal performance.

Ram 2014 Heavy Duty pickups can be spec’d with a Cummins 6.7-liter diesel rated at 850 lb./ft. of torque or a 410-HP HEMI V-8 gas engine. The models can also be equipped with a dual alternator system to provide higher electrical loads, reducing demand on the engine for powering upfits and accessories. Models equipped with Cummins engines are offered with dual 220-amp alternators and units powered by the HEMI gasoline engine can be fitted a combination of 220- and 160-amp units.

Two Borg-Warner part-time transfer cases with 2WD, 4WD High, 4WD Low and Neutral settings are available on 2014 Ram Heavy Duty models. The BW 44-46 is an electric shifting transfer case and the BW 44-47 is a manual shifting unit. Both feature a low-range ratio of 2.64 and locking differential from front to rear.

Ram 4500 and 5500 Chassis Cabs received upgrades for 2014. Both models are now rated at a 7,000-lb. front gross axle weight rating (GAWR) when fitted with 6.4-liter gasoline engines, and a 7,250-lb. GAWR with the 6.7-liter Cummins Turbo Diesel. Additionally, the gross vehicle weight rating (GVWR) for the Ram 3500 equipped with single rear wheels has been raised and now ranges from 10,500 to 12,000 lbs. A 10,000-lb. GVWR model that falls below certain truck-weight restrictions is also available.With frame lengths of 60, 84, 108 and 120 in., 2014 Ram Chassis Cabs are designed to ease installation of systems and bodies without interference or relocation of components. The models have no components or lines above the rear frame rails, through-the-frame plumbing and electrical conduits, and a DEF refill port located at the rear of the cab on the driver’s side.

Fully-tested and revamped, according to the OEM, the Ram Trucks 2014 lineup is ready to roll as efficiently and productively as possible.

What’s the right axle ratio for vocational trucks?
Connect with us