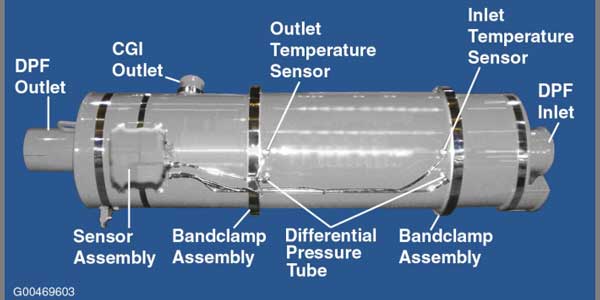 The aftertreatment system measures exhaust backpressure and temperatures to calculate the levels of soot and ash on the surface of the DPF. Figure 1 (above) shows a typical DPF and the various electrical components that are attached to its housing (as seen in TruckSeries, Mitchell 1’s truck repair information software).

If the DPF system determines it is time for cleaning, it has two strategies: passive and active regeneration. The former is carried out while the vehicle is in operation (without the driver’s knowledge), and the latter is indicated by a light on the dash and requires the truck driver to park the truck and manually switch the regeneration on… and then wait.

Both strategies inject diesel fuel into the inlet of the DPF while using heat generated by the engine exhaust to burn off the soot. The DPF cannot perform as required if the upstream engine systems are not in perfect working order.

Issues like faulty injectors, internal engine oil leaks or internal coolant leaks can cause severe damage to the DPF that requires replacement of the filter. These faults can also be masked by the DPF and may remain undetected until the DPF fails.

To identify upstream faults, it’s important to remove the DPF for inspection and check exhaust opacity in front of the DPF. Also, external damage to the DPF housing or any of the components may compromise the filter’s structural integrity.

So why, under normal conditions, would the DPF need to be serviced by a technician? While the above mentioned strategies remove the soot from the DPF, the trapped metal oxide ash deposits on the DPF filter need to be physically removed. These ash deposits have been identified as hazardous materials, and due to EPA regulations the service is done in a controlled environment with special machinery designed to clean and capture the remaining deposits.

It is important to note that the use of a pressure washer or compressed air to clean the DPF will cause damage to the filter and should be avoided. The technician should always refer to the DPF supplier’s service recommendation and follow local state and federal regulations when servicing or replacing the DPF. A typical DPF maintenance interval is shown in here:

To get the most out of the DPF system, follow the truck manufacturer maintenance schedules and make sure the DPF system is functioning without any problems. Driver awareness can play a key role in predicting life expectancy of the DPF. Frequent active regeneration events indicate the DPF system is working extra hard to remove the deposits.

Overall, the DPF’s design has improved dramatically after several years of real-world testing. They are lighter, more durable, efficient and reliable—all of which should contribute to making the truck run more efficiently when properly maintained.

Advertisement
In this article:Mitchell 1, Tech Tips