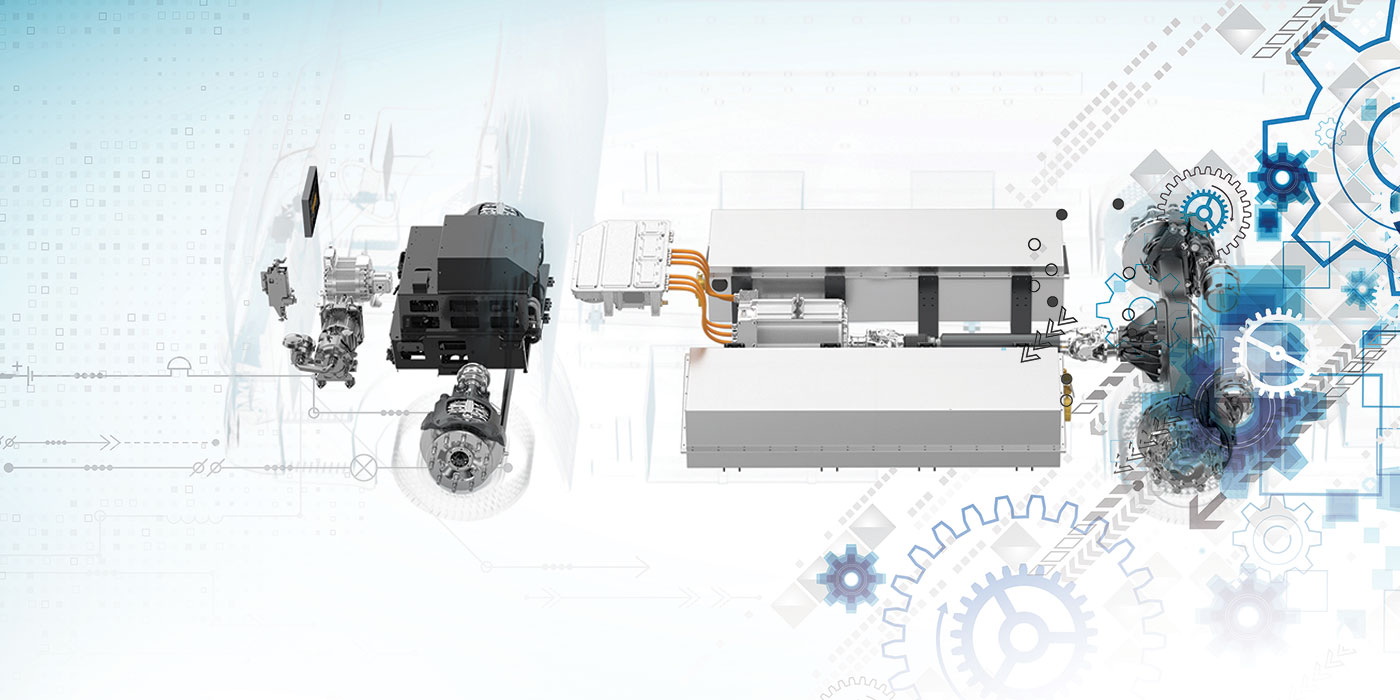 According to the experts surveyed by FE, while gas and diesel engines have a narrow peak torque range, requiring more gears to achieve peak speed and RPMs, electric motors have a much wider peak torque range, with a torque band measuring thousands of RPMs, rather than hundreds. For this reason, even a heavy-duty truck requires very few gears—in a two-speed transmission, the first gear is used to get the load moving, and the second is used for cruising.

What does this mean to you?

In short: simply that the transmissions have been designed for maximum efficiency and smooth shifting. The lower the number of gears in an electric transmission, the more efficient the process.

A different way to say this, according to Julie G. Marshaus, manager of new product introductions, systems eMobility with Eaton Corp., is that rather than shifting at 10, 20 and 30 MPH for a diesel engine, now you would only shift at 30 MPH and you will have the same or better performance.

“Electric motors develop torque over a much wider speed range and are much more efficient over a broad range of motor speeds. Two-speed transmissions broaden this high torque range further and give a noticeable improvement in road torque for higher speed events like passing. They also allow the vehicle to have much higher low-end torque for things like pulling up a loading ramp with a heavy load,” says Keith Martin, chief engineer of advanced products, transmission systems at BorgWarner, which is providing the transmission for the Fuso eCanter electric truck.

Simply stated, according to Steve Slesinski, director of global product planning for Dana, the electric propulsion system does not require the same amount of gear reduction to meet vehicle performance requirements. Even a one-speed transmission will work for certain applications.

“The current popular applications for battery electric vehicles do not require a transmission with shiftable gear capability,’ Slesinski points out. “Dana’s most popular e-powertrain option is the central drive motor configuration which has the torque and speed range to eliminate the need for having additional gears altogether.”

The reduced number of gears is the main difference between transmissions for diesel and gasoline trucks and those for EVs, but there are other, smaller differences as well.

Besides the gear count, BorgWarner’s Martin says that the other biggest difference is the launch device.

“No internal combustion engine (ICE), whether gas or diesel, can run at 1 RPM,” he explains. “ICEs have a minimum speed and we call this idle speed. To launch a vehicle from a standing stop, we need to slip either torque converter in an automatic of the clutch in an AMT or manual transmission. On the other hand, electric motors can run very easily at 1 or 2 or 3 RPM. Consequently, they do not need a clutch nor a torque converter to launch the vehicle. But there are other subtle differences. Transmissions in electric vehicles need to be much quieter. Since there is no engine noise to mask transmission noise in an electric vehicle, the transmission must be quieter than normal.”

“The other main difference,” says Eaton’s Marshaus, “is that a specific reverse gear is no longer required. Since electric motors can spin backwards, the electric motor provides the reverse function while the transmission remains in a forward launch gear.”

“With the high efficiency and available torque band, there is no need for multiple/complex transmissions to maintain optimal performance,” says Dr. Andreas Juretzka, head of electric mobility product for Daimler Trucks North America. “Depending on the electric powertrain architecture, a transmission may not even be required depending on motor performance.”

Bill Kahn, senior principal engineer with Peterbilt, notes that the use of eAxles is also of significance, as these will contain the necessary shift capability within the axle itself, rather than the transmission.

There are maintenance benefits that go along with having electric transmissions as well.

“With less gearing, and less complexity, this configuration will likely have lower service and maintenance as well,” Slesinski says.

“Since there is no slipping clutch needed to launch the vehicle from a standing stop, one of the biggest durability concerns for the transmission has been eliminated,” BorgWarner’s Martin notes. “The driver no longer needs to worry about creeping along at low speed in stop-and-go driving and overheating his launch clutch. As a result, transmissions in electric vehicles should prove to be very durable.”

The role of the driver

One of the biggest questions as electric trucks become more widespread is how drivers will react to them. The differences between an electric truck and a comparable diesel vehicle aren’t overwhelming, but they are definitely noticeable.

Luckily, the past decade has been dominated by automated manual transmissions (AMTs), and the fact that the vast majority of drivers are used to operating AMTs will better prepare them for electric transmissions than jumping straight from a manual would.

In fact, many electric transmissions are functionally similar to their diesel counterparts. John Moore, product marketing manager with Volvo Trucks North America, notes that the electric transmission used in Volvo’s trucks is a variant of the Volvo I-Shift with fewer gears and all the benefits of the AMT.

“In general, since the electric multi-speed transmissions have fewer required ranges, they lend themselves to architectures like automated manual transmissions (AMTs) and dual clutch transmissions (DCTs),” says Larry Pritchard, technical product lead for North America with BorgWarner. “In addition, these types of transmissions can utilize on demand shift actuation/clutch engagements that reduce the parasitic losses associated with the continuous hydraulic operation of automatic transmissions.”

The consensus among those interviewed is that drivers will have an easier time maneuvering the electric truck’s transmission, and that the lack of shifting will reduce stress and strain.

“Electric drives are inherently easier to operate due to the fact that the launch function is performed by the electric motor,” Pritchard says. “No clutch or torque converters are required to match the motor output to the launch requirement. In addition, electric drives can match the speed required of the motor during a ratio change.”

“The electric driveline is designed to simplify things for a driver, and no shifting is seen as a benefit. Drivers will really enjoy driving with this electric motor and transmission combination,” Volvo’s Moore says.

He notes that one benefit for drivers when compared to an AMT or a manual is that the electric driveline has no reverse gear, as the motor simply runs in a different direction rather than requiring its own gear.

“We’ve found the first thing drivers notice is seamless and even acceleration,” he adds. “There are no noticeable changes in engine RPMs needed to match engine speed to transmission speed to shift gears as with a traditional automated manual transmission (AMT). This saves energy by better managing momentum as well as decreasing driver stress and increasing productivity.

“Many perceived issues in the transition to AMTs from manuals involved backing up and not being able to feather the clutch to control reverse speed when hooking up a trailer or backing into a dock. While the 12-speed Volvo I-Shift masters these maneuvers impressively, it is no match for the electrically driven two-speed I-Shift combination. The driver can feather reversing down to 0.5 MPH.”

“The most outstanding differences from an AMT/ICE setup are the instantaneous torque that is felt with an electric propulsion system, and the lack of any kind of noise from the engine or exhaust system,” Dana’s Slesinski says.

With Dana’s direct drive motor approach, he adds, there is no torque interrupt, no shifting and no vehicle lag due to changing of gears allowing for very smooth, quiet operation through a broad range of speeds and grades.

Overall, once the driver gets used to the truck, the change to an electric transmission should be a welcome one.

“There is going to be a learning curve for any driver when changing to an EV,” Eaton’s Marshaus points out. “Obviously, when changing from a manual to an EV, there is less work for the driver to do, as the gear selection is automatic. A lot of the features that drivers like in an AMT, like hill hold, should still be there for an EV. The biggest change to get used to is that the engine sound is missing. There is no longer an indication of vehicle speed or vehicle performance from listening to the engine. The drivers will need to adjust to having peak torque at zero speed and having fewer shifts during a full acceleration event. In addition, there is no longer a clutch in most installations, so the low-speed operation should be superior to diesel-powered trucks.”

“The electric truck itself is a whole different experience for drivers,” says Peterbilt’s Kahn. “These are not diesel replacement units but purpose-built electric trucks. They will enjoy the quickness of the acceleration, the quietness of its operation and the smoothness of the ride.”

Components: Reyco Granning partners on a new variant of the 23AR

A reduction in gears: Inside electric truck transmissions